This is a repeat of my 2020 Safety Net article, updated with the new 2021 costs. This is of course only relevant to Australia.

It’s not cheap having chronic health conditions and constantly needing medication. There are some government concessions available beyond the standard PBS subsidy, but we need to take charge and make sure we’re not missing out on them!

I have to go to a pharmacy soon to get a new batch of prescriptions made up, and being the start of a new year it will cost me a lot more than it did last month. My 2020 PBS Safety Net status has expired, so I’m back to paying regular PBS prices for prescriptions. 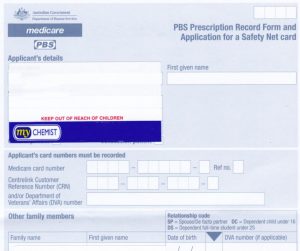 I will be picking up a PBS Prescription Record Form from the pharmacy. I do this every year, even if I don’t know if I will reach the Safety Net threshold.

In short, if you’re paying the usual PBS prices (which are capped at $40-41 per script) then when all the money you’ve spent on PBS scripts in the calendar year reaches the threshold (which this year is $1497.20) you can use this form to get “CN” concession status for the rest of the calendar year. This then gives you concession pricing for PBS scripts ($6.60) along with NDSS concession pricing on BG test strips and insulin pump consumables.

This may sound like a lot of money, but especially for families on the same Medicare account the spending for multiple people can all count towards the threshold. That’s all PBS prescriptions, not just those relating to your diabetes.

Note that if the cost of a medicine is greater than the $41.30/$6.60 PBS subsidy cap, only the PBS-covered portion counts towards the threshold. This usually only happens with some particular brands rather than generics.

Note that while the official PBS script co-payment is $41.30 (or $6.60) pharmacies are allowed to discount this by $1. Thus $40.30/$5.60 at some pharmacies. It saves you a dollar per script, although it does slightly slow your advance towards the threshold.

You need to keep a record

If you only use one pharmacy, they obviously have a record of your spending and should be able to tell you when you’ve reached the threshold. And in those cases sometimes people don’t bother with the paper forms.

But if you get some prescriptions filled at different pharmacies, it can help to carry your own record and take it with you each time you get a prescription filled. The record form shown above serves this purpose, and there are tiny stickers the pharmacy will apply for each script showing the PBS contribution amount, date, and record numbers.

We keep the form at home in the same folder as all the prescriptions. If I forget to take the form with me to a pharmacy I make sure I ask for the stickers to attach to the form when I get home.

As the year progresses and the form fills up, the pharmacist will staple another blank form to it and carry on. Last year when we reached the threshold there were three sheets in the stack.

When a prescription eventually takes us over the threshold the pharmacist applies for and generates a concession or entitlement card for you on the spot, and charges concession pricing for the script that puts you over the threshold, and for all PBS scripts for the rest of the calendar year.

Further explanation of the system can be found on the PBS website.

Take advantage of the system!

Note the words that PBS uses:

Responsibility for claiming entitlements rests with the patient.

You might not reach the threshold this year, but unless you keep a record of your prescriptions you might not find out, and be spending extra money you didn’t have to.

Some years our family reaches the threshold part-way through the year, although in one recent year we reached it in early December (just before we left on an extended trip where we wouldn’t be able to fill prescriptions – oh well).

Once you reach the threshold you get discounts on your NDSS supplies, but unfortunately the money you spend on NDSS supplies does not count towards the PBS Safety Net.

Ideally your NDSS record will be updated automatically when you reach concession status, but until you know it’s been updated it doesn’t hurt to have your concession card on hand when placing the orders.

With a “CN” concession (see above) 100 BG strips currently costs $1.20 instead of $15. With “SN” status they’re free. There are also savings on pump consumables, although it’s not as much.

The PBS Safety Net is separate from the general Medicare Safety Net thresholds (which cover money spent on medical procedures rather than medicines). Don’t confuse the two.

But luckily Medicare keeps track of that spending and will contact you for confirmation when you reach that threshold. You don’t need to keep a record, but you do need to follow up and confirm with Medicare when they notify you.