This is part travel story, and part commentary about a BG meter.

For my recent African trip I assembled spares of everything, so I’d be fine if anything misbehaved. I had a backup pump, a backup OpenAPS rig, a backup CGM-collection phone, a spare G5 transmitter, spare sensors, BG meters, insulin (both sets of insulin were in Frio cooling bags), cannulae, reservoirs, swabs, etc, etc. I’ve had lots of trips, and lots of practice at preparing everything, and packing so that if one bag was lost/delayed I would still be OK. But this time not quite everything went smoothly.

Be prepared to change plans

I had bought spare BG strips for the meters, but while I was still on the plane to Africa I realised that the spare strips were still sitting neatly on the desk back in my office! I still had enough strips to get me through the trip as long as nothing unusual happened. But I started to worry about what would happen if my CGM hiccuped and I needed to do an unusual amount of calibrations. So once we arrived in Windhoek, on Friday afternoon I visited a few pharmacies to see what I could buy. I had less than a day before we headed off into the wilds, and I didn’t fancy trying to track down strips in a remote village if I ran out.

But no-one had strips compatible with my meters. I had two Accu-Chek Guides and one Contour Next One. The first pharmacy had a Contour meter and strips (not the Next: this was the model of meter and strips which has been discontinued in Australia and the US/UK/etc). They mentioned there was also an Accu-Chek but they didn’t have it in stock (and I didn’t have time for it to be ordered in). The next pharmacy didn’t have it either, but they were able to transfer one over from another shop for me that afternoon. It was the Accu-Chek Performa II. 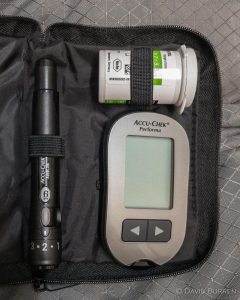 I had previously tested the Performa strips using my Performa Combo meter and found it to have comparable accuracy to the Guide and Contour Next. But I hadn’t brought that meter with me. So I ended up buying a new meter (which came with a sample of 10 strips) plus a 50-strip container. This ended up costing me about AU$60. More than I would pay at home, but not completely off the charts.

It made me very comfortable to have those extra 60 strips before we headed off into the dirt. I worked through the 10 sample strips early on to convince myself the meter was working properly, then put the Performa meter and strips aside as spares. The plain Performa meter (which is available here in Australia too) doesn’t have a backlit display so isn’t as convenient to use as the others, but it worked fine. Incidentally, it uses (and comes with) one CR2032 battery, and I had spares of those in my kit already as the other meters use two each.

The Performa meter also came with a FastClix lancing device, and I’m always happy to have a spare of those. They’re currently my favourite lancer, and I use them with all my meters of all brands.

If I had a choice I wouldn’t have bought the Performa meter: it doesn’t have some of the bells and whistles I prefer in my Accu-Chek Guide, Contour Next One, or even Accu-Chek Mobile meters.
But it produces reliable results, and it was available!

As it happened, by the end of the trip I hadn’t needed to start using the Performa. But I’m very glad I had it with me! For now it’s sitting on my office desk getting used occasionally: it is useful to have a few meters scattered around the place (as long as they’re all consistent, which is behind my earlier testing).

Things don’t always go to plan with T1D when travelling. Planning ahead and taking spares of essential things is good. But even when your plans don’t quite work out, there’s usually a way around the problem. Especially if you notice it early enough.