How long does the insulin we inject last in our bodies? Many people are confused about the answer to that. Unfortunately just like so many other things in life, the answer is usually “it depends”!

We set the insulin duration in our pumps, and if we get it too short then the pump can end up advising us to take more insulin than we need. Many people use values around 4 hours, and in fact this is a common value advised by doctors and educators. It’s also usually a reasonable starting point.

However in the world of closed-loop pumping we usually use much longer values such as 6 hours. This is also correct. How can they both be true?

Shown below is the activity profile of a common insulin such as NovoRapid, as rendered inside AndroidAPS. There can be some variation between individual people, but the graphs are based on the clinical data produced by the insulin manufacturers after testing in a broad range of people.

The blue line is showing the “activity” of the insulin.  The activity for NovoRapid and Humalog peaks at around 75 minutes. As you can see it then gradually drops away, with a little trace of activity all the way out to 6 hours (360 minutes). We often refer to that as the “tail” of activity.

The shaded purple area is showing the “IOB”: the amount of insulin still “on board”. The higher the blue activity, the faster the purple IOB drops.

The body’s actual behaviour is probably not quite as smooth as the graph shows, but these exponential graphs have been shown to closely match the clinical trial data.

After a bolus of insulin it seems to take a while before it has “any” effect, but it seems that the activity doesn’t actually sit at zero for ages: we just usually don’t notice the effect until it reaches some threshold value.

The bolus advisor in a pump wants to know how much of the last bolus is still in your system (the IOB) so it can subtract that from any correction bolus and avoid over-dosing. There are two issues with this:

For a start, the pump ignores the tail. In fact, some bolus advisors apparently regard a clinical “10% remaining” as “IOB=0”. And then they just model a linear decay down to “0” at 4 hours, as shown by the green line in the following graph.

So with that green line you can see that it’s ended up at around the 10% mark by 4 hours. But also note that the insulin activity is not actually zero at that point (although it’s nowhere near full strength).

But because the pump is only tracking occasional boluses, the pump engineers decided that the last tail of activity can be ignored. After all, you didn’t notice the bolus until the activity had reached a starting threshold…

It’s not uncommon for people to set duration values in their pump in the 3.5-4.5 hour range, but as you can see it’s all an approximation.

The opensource (“DIY”) closed-loop systems manipulate the basal flow of insulin as well as applying boluses, and they use these exponential calculations to track all the insulin going in. All those little doses add up over time, and what looks like a thin “tail” on the graph definitely adds up over time. So in that context it’s very important to use a duration close to 6 hours so that the system doesn’t advise over (or under) dosing you.

The whole point of these systems is to keep your BG in range. If you used 4 hours in an opensource loop system it’s pretty much guaranteed that it will send you hypo eventually!

But if you told a pump’s bolus advisor that the duration was 6 hours, at 4 hours it would assume there was still 33% of the last bolus in play, and would massively under-calculate any correction bolus.

Fiasp is an accelerated form of NovoRapid, and the vitamin B3 infused through the cannula speeds the absorption of the insulin into the blood stream. This can be seen in the following graphs (again, based on the displays inside AndroidAPS). 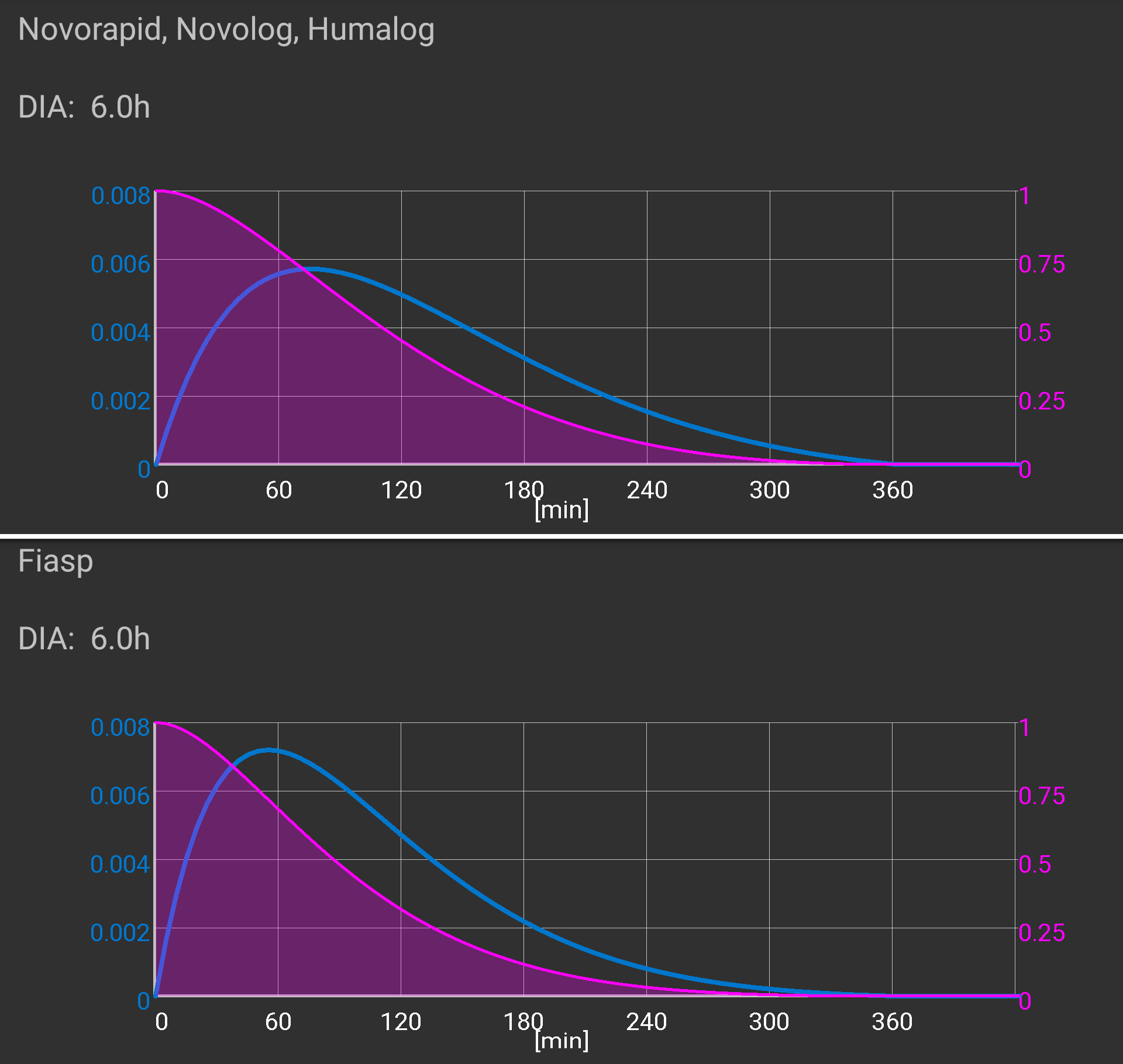 The activity peaks sooner (usually at around 55 minutes) but it still stretches out just as far. By 5 hours that tail is very thin, but it’s actually still there.

Because Fiasp has a strong effect peaking early, the activity reaches that nominal threshold where you notice its action much sooner than with NovoRapid, and after the peak the IOB drops more rapidly. Fiasp acts like a “faster on, and faster off” insulin, even though there’s still a tiny tail all the way out to 6 hours.

In an opensource loop system you should still use a 6 hour duration, but select the Fiasp insulin model to track the decay.

In a traditional pump system you may wish to use a 3 hour duration for Fiasp instead of 4. Have a look at the above graph and consider where the purple line reaches the 10% mark. But also consider that the Fiasp activity (the blue line) at 3 hours is still higher than the NovoRapid activity was at 4 hours. Choosing an appropriate duration of Fiasp action in a traditional pump should be done with care (and probably experimentation).

For a more-detailed discussion of insulin duration, have a look at this article at Diabettech.

1 thought on “Duration of Insulin Action”