It should be fairly obvious that over the years I’ve been an avid consumer of science fiction (both as books and movies). At the very start of this blog you can find a discussion of JARVIS (from Iron Man) which was my CGM controller.

Soon after I introduced GERTY (from Moon) which was the pocket computer that ran my OpenAPS closed-loop system.

The Bionic Wookiee name itself is obviously associated with the Star Wars universe. Let’s see what happens when the “power button” icon (which for Bionic Wookiee is in the blue of the diabetes circle) gets merged with another bit of Star Wars.

The circle gets stretched, and then a starship takes off… 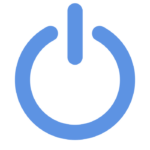 Of course the Wookiee Chewbacca is the co-pilot of the Millennium Falcon, which does make it seem apt. 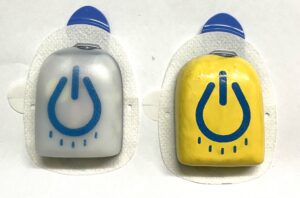 It seemed like an obvious design to stencil onto the Omnipods I occasionally use. Sometimes it’s the little things that help keep us amused!

Here’s one (with a nod to Ukraine) on the back of my arm. 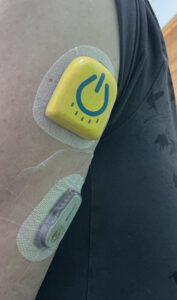 3 thoughts on “Fun with icons”