Faster insulins can be dramatically useful for AID (Automated Insulin Delivery) systems. Anything that reduces latency within the loop can improve our overall glycaemic control.
A topic often discussed amongst people looking to get faster insulins is the possibility of mixing insulins in pumps. I do have to be clear and point out that this is completely off-label, and not supported by anyone. Especially not by me.

However it is something I have done for myself, and this is a short discussion of a recent experiment.

Let’s start with considering the difference between NovoRapid and Fiasp. Both are insulin aspart, but Fiasp has had some nicotinamide (also known as niacinamide) added to speed up absorption. For reference, here’s the composition information from Novo’s product info for NovoLog (another name for NovoRapid) and for Fiasp. 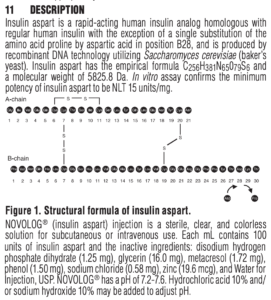 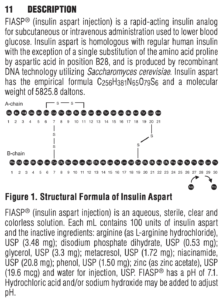 Here’s a graph of the activity for each of these insulins ramping up and then fading over time. These graphs show the models that work for me in my oref1-based AID system using an exponential model where we specify the peak time (in minutes) and the overall duration (in hours). In my experience these numbers model the behaviour of these insulins very well for me. 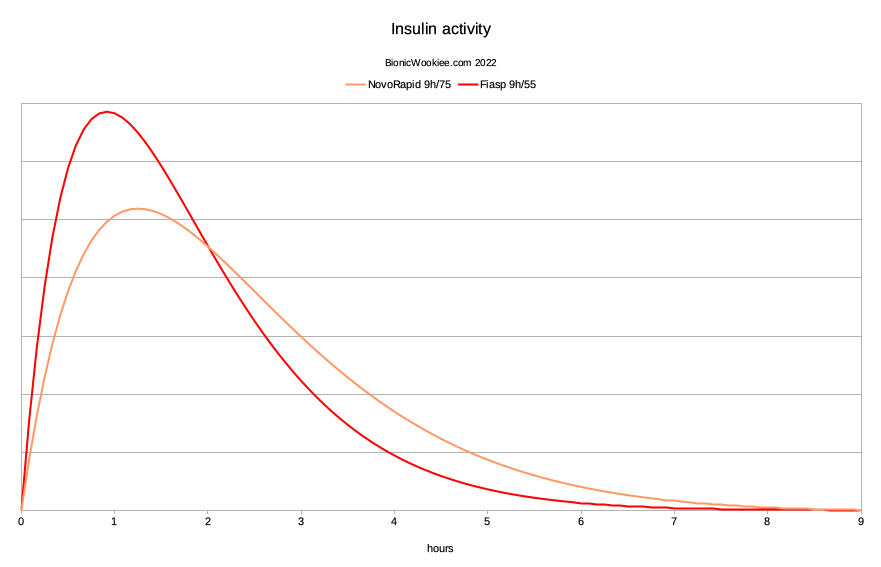 They both have the same overall duration, but the accelerant moves much of the absorption forward in time, so we end up with a profile that’s much “faster on, faster off”.

Instead of those Novo insulins, let’s look at Lilly’s Humalog and Lyumjev. Again, these are both insulin lispro, but Lyumjev has had a vasodilator (trepostinil) added to the mix to speed absorption. Lilly’s product information clarifies the differences (similarities) between Humalog and Lyumjev: 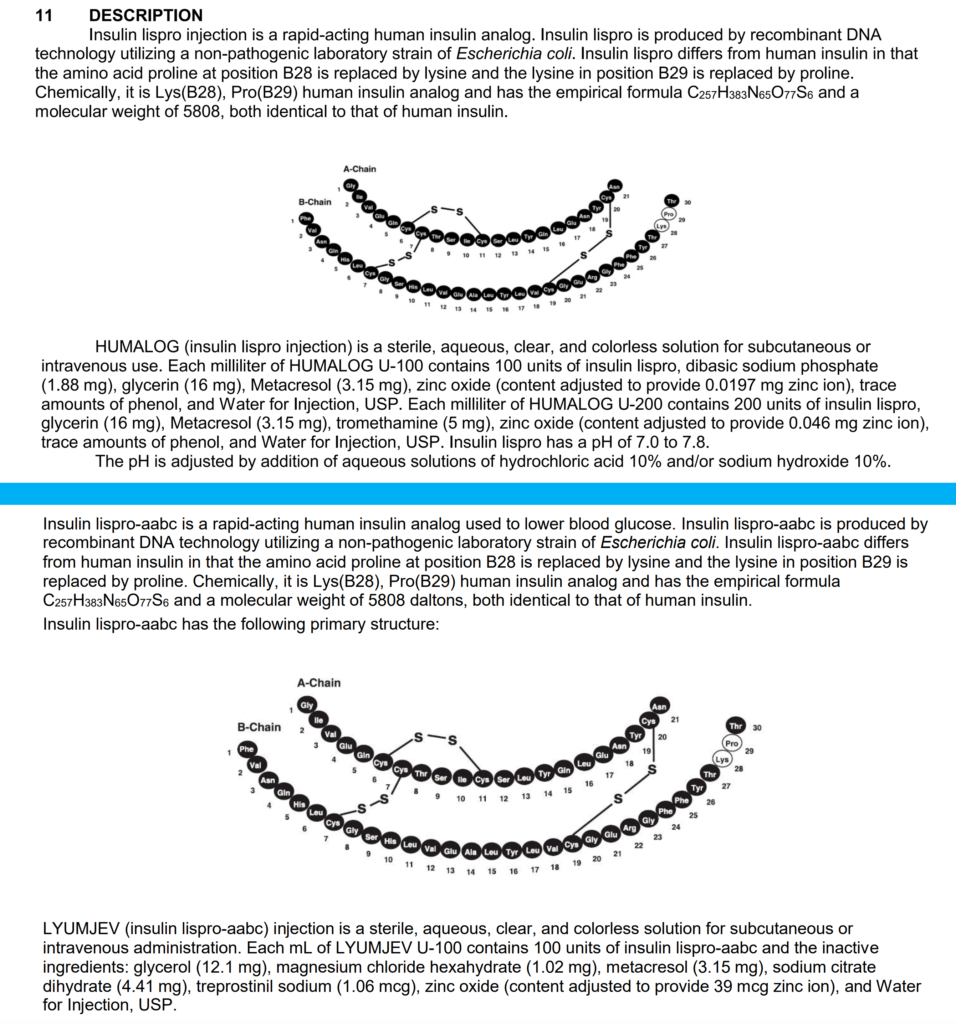 Now let’s look at the activity graphs that seem to model these insulins well for me:

In this case the overall duration seems a bit shorter than the Novo insulins, plus the accelerant brings the peak of activity to 45 minutes (unlike Fiasp’s 55 minutes) which produces a much steeper peak.

Given that (again) the insulins are almost the same just with some accelerant added, I spent some months using a 50:50 mix of Humalog and Lyumjev to halve the concentration of accelerant. The major intent of this was to let my body acclimate to the trepostinil without experiencing the stinging side-effect which seems fairly common.

As I previously reported, this seems to have been very effective! By experimental observation I ended up using timing parameters for the mix that are shown in the dashed line on the above graph. Not exactly the same as 100% Lyumjev, but very close.

So on the face of it Lyumjev seems to be the fastest kid on the block. “But wait” say some people. “What if we combined the nicotinamide of Fiasp with the trepostinil of Lyumjev? Can we get something even faster?”

Actually there are usually multiple drivers for the suggestion of mixing:

Let’s start off by considering the baseline data from those graphs. What if we mixed Lyumjev and Fiasp and they didn’t interact? As if we had two pumps infusing half each in different sites. Then we’d just be looking at the average of the two: 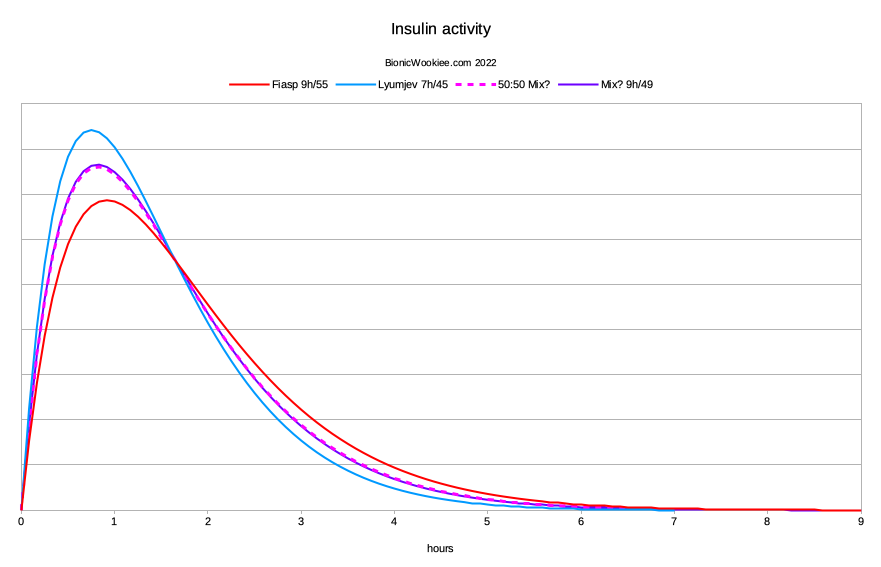 The dashed pink line is that average. As you see, it can be closely approximated with a 49 minute peak and 9 hour duration.

So as long as there’s no drastic interaction between the medicines, 9h/49 should be the baseline performance. But the theory was that the peak might actually move earlier than Lyumjev’s 45 minutes, not simply half-way between 45 and 55 minutes. To check that a practical experiment would be required.

From Theory to Practice

I made up a reservoir with the 50:50 mix of Fiasp and Lyumjev, and went ahead. After just under 5 days I stopped, but in that time made a few observations.

Given these observations I called an end to that experiment. Presumably I would notice more details if I continued for weeks, but I was happier stopping.

I saw no evidence that Fiasp’s nicotinamide can speed up Lyumjev. 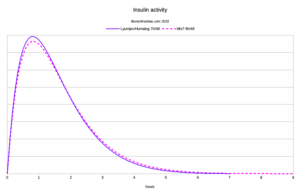 If I need to stretch out my supply of Lyumjev I will stick to mixing it with Humalog. Here’s that theoretical 9h/49 compared to the Humalog mix which I know works well for me. I’ll go with the simpler mix.