Until the Freestyle Libre glucose monitors arrived in Australia in mid-2016 I had been monitoring my sugar levels by taking drops of blood (usually from my fingertips) multiple times a day and using a BG meter. But I was conscious that this didn’t give me the complete picture of what was going on during the day (e.g. after meals and overnight). Once I had the Libre I was able to get a graph of the last 8 hours sugar levels by simply swiping a reader over the sensor stuck to the back of my arm. Each sensor lasts a fortnight. By reading at least once every 8 hours I was able to collect continuous measurements which I could upload to a computer.

But that’s still looking back in time. It provides an immense amount of useful data, but isn’t very proactive in telling you what’s happening now (or about to happen) unless you stop what you’re doing and scan the sensor every few minutes). It is SO much easier than finger-pricking all the time (e.g. it can scan the sensors through thick clothing, which is very useful in cold climates) but it’s not the same as a Continuous Glucose Monitoring system which can give you alerts when you’re going low, so you can treat it (usually with a snack) before you hit “hypo”. 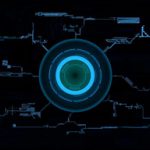 If you know the Iron Man stories you may be familiar with the character of Edwin Jarvis, who was the Stark family’s butler. Tony Stark used his voice and personality when creating his helper AI which he calls J.A.R.V.I.S. (Just A Rather Very Intelligent System). In the recent Iron Man movies JARVIS is voiced by the English actor Paul Bettany.

Early in 2017 when I was putting the pieces together for my own CGM (Continuous Glucose Monitor) there was going to be an Android device as the core, collecting data from the Libre sensor every few minutes and sending status and any alerts to a watch on my wrist. That device needed a name, and there was one name that seemed an obvious choice.

So thus when my current BG meter connects to it via Bluetooth to upload the latest reading (e.g. to calibrate the CGM) it now gives a display like the following: 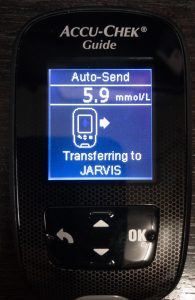 Well it made me smile!

JARVIS is currently a BlackView 7000 Android 7 phone, which had two advantages: it’s cheap (I think mine cost AU$170 including delivery, bought new through eBay) and it’s robust and fully waterproof. I can have it in my pocket and not worry about being drenched in a thunderstorm or falling out of a boat (as long as it doesn’t fall out of my pocket!). It turns out the battery lasts for well over two days with the load I put on it.
It doesn’t have an active SIM, as I don’t use it as a phone. It’s just at the core of my diabetes tech that gets carried around in either a pocket or a pouch. 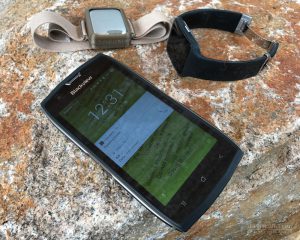 It runs the xDrip+ app as the CGM, which is fed data from the LibreAlarm app that scans the Libre sensor on my arm via the guts of a Sony Smartwatch 3 that sits on top of the sensor in a 3D-printed housing. There’s another watch on my wrist that shows me everything I need, while the phone itself hides away in a pocket or pouch. All these devices are waterproof (well, not for extreme activities such as diving, but an IP67 rating is not to be sneezed at).

This setup gives me everything a commercial CGM (such as those from Dexcom and Medtronic) does, with a lot more customisation available. And for a cheaper investment. The only ongoing cost is the fortnightly Libre sensor (although that’s not insignificant). And I can fall back to using the standalone Libre Reader (scanner) at any stage. There is a little kerfuffle in terms of keeping 3 devices charged up, but it doesn’t take long to completely recharge the watches if required.

I can also download all the glucose history from xDrip+ and use that to generate graphs. These let me and my doctor see patterns in my body’s behaviour and we’ve used this to tweak and refine the settings in my insulin pump over time.