For a change I’m not going to write here about the latest insulin pumps, CGMs, and closed-loop systems. This is about insulin pens, and possible compatibility between some models that the manufacturers won’t tell you about.

Before I started using an insulin pump, I used injection pens for both my short-acting (“bolus”) insulin and my long-acting (“basal”). Many people using MDI (Multiple Daily Injections) therapy still do.

Pumpers use pens too!

Many people using insulin pumps buy their quick-acting insulins (e.g. Humalog or Novorapid) in 3ml pen cartridge form instead of 10ml vials. It’s just as easy to fill a pump reservoir from these as it is to use vials, and having an insulin pen on-hand allows us to have a backup option for if our pump is damaged. Similarly most pump users will still have Lantus or Levemir basal insulins in the fridge and a pen in the cupboard as part of their backup plan. 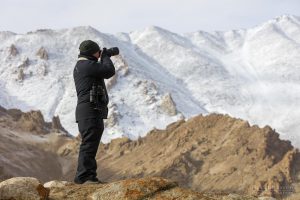 Personally if I’m having to use an insulin pen it’s probably because I’m somewhere remote, my pump has failed, and I’ve had to switch to my backup plan. Ideally I would have a backup pump, but pumps are expensive and in fact in some environments a backup pump might not be a good idea. For example in 2017 I spent a few weeks around 4200m altitude in the Himalayas photographing snow leopards, and the particular insulin pump I was using was only certified to work at up to 3000m altitude. If the altitude caused my main pump to fail, what would be the point of having a backup pump that would meet the same fate? So I had to take pens and long-acting insulin as my backup instead.

Which pen to use?

There are basically three ranges from each of the major insulin manufacturers.

To inject the insulin we screw a disposable needle onto the end of the pen. Some pens allow you to dial up a dose to the nearest 1U, some now allow 0.5U increments. The AutoPen24 (which is compatible with Lantus, and I used for a while in the past) only allows 2U increments.

Officially each manufacturer’s pens are only compatible with their own cartridges. The Novo cartridges only fit into the Novo pens, but it turns out that the Humalog and Lantus cartridges can be swapped (with a bit of work). There are lots of provisos with this though, and that’s what I wanted to explore with this article.

It’s contrary to the manufacturer’s instructions, and is completely unsupported. But if it helps keep someone alive in an emergency, it’s useful to know about!

What about disposable pens?

These insulins are also available in pre-filled disposable pens (usually 3 ml each). In fact the Toujeo U300 insulin is only available in this form, and that makes sense to avoid dosing errors with people accidentally injecting three times their usual dose if they were using a U100 pen. But for “normal” insulins I’ve never seen the point of disposable pens. They would take up more space in my fridge, in my travel bags, and add more rubbish to the world’s waste problem. We already generate lots of medical waste: why add to it?

It’s useful to know your options

Consider the Himalayan scenario I mentioned above: if my pump failed and I had one pen for Humalog and one for Lantus, what would I do if the Humalog pen broke? I couldn’t just wait for 3 days before getting back to civilisation.

Looking into this was when I discovered that some people have been using Humalog in Sanofi ClikSTAR pens (or JuniorSTAR pens which allow 0.5U increments) because they had lots of reliability problems with the HumaPen models they could buy. This is in normal use at home, not just for emergencies. I wanted to sort out my emergency options though, so I decided to try it out.

The pens I had on hand for this exercise were a Sanofi ClikSTAR (Lantus) pen, and a Lilly HumaPen Savvio. 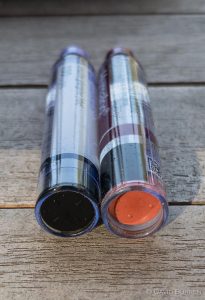 The cartridges I used contained Humalog and Lantus. The Lantus cartridge has a black plunger, while the Humalog has one more orange.

You should be able to see in this photo that the plunger for the Humalog starts a little further into the glass cartridge. But yet both cartridges apparently contain 3 ml of fluid. So what’s going on?

The area of the Lantus plunger comes to 70.4 mm2, while the Humalog plunger is 71.9 mm2. The slightly fatter Humalog cartridge contains slightly more insulin for each mm of length. 1.02 or 2% more.

So it seems that any doses with the “wrong” insulin cartridge in the pen will be 2% off. With Humalog in a Sanofi pen the actual dose will be 98% of what you dialled up, and with Lantus in a HumaPen you will get 102% of the dialled dose.

This is not supported and is clearly “off-label” use of the medicine, and I’m not going to recommend that anyone does this as a regular thing. But if I was stuck somewhere with only one working pen, I feel confident that I would be able to survive the emergency. In fact a 2% error in the insulin dose is not likely to be noticeable.

I have not measured the actual volumes of insulin delivered by each of these pens. My estimate of a 2% error is only derived from my observations of the internal diameter of the cartridges. But it feels like a reasonable estimate.

Yes they do, with a bit of work. The Humalog cartridge drops straight into the ClikSTAR pen, and Just Works.

Fitting a Lantus cartridge into a HumaPen requires an extra step though.

Because the Lantus plunger starts out almost at the end of the cartridge, the pen can’t be assembled with a fresh cartridge as there’s not enough room. A partly-used cartridge does fit though.

So the answer is simple: we need to waste some of the insulin in the cartridge. Carefully attaching a needle to the tip of the cartridge holder and pushing down the plunger with the needle cover does this quite easily. As you can see from the photo above of both cartridge types, we only need to push the plunger in one or two mm. 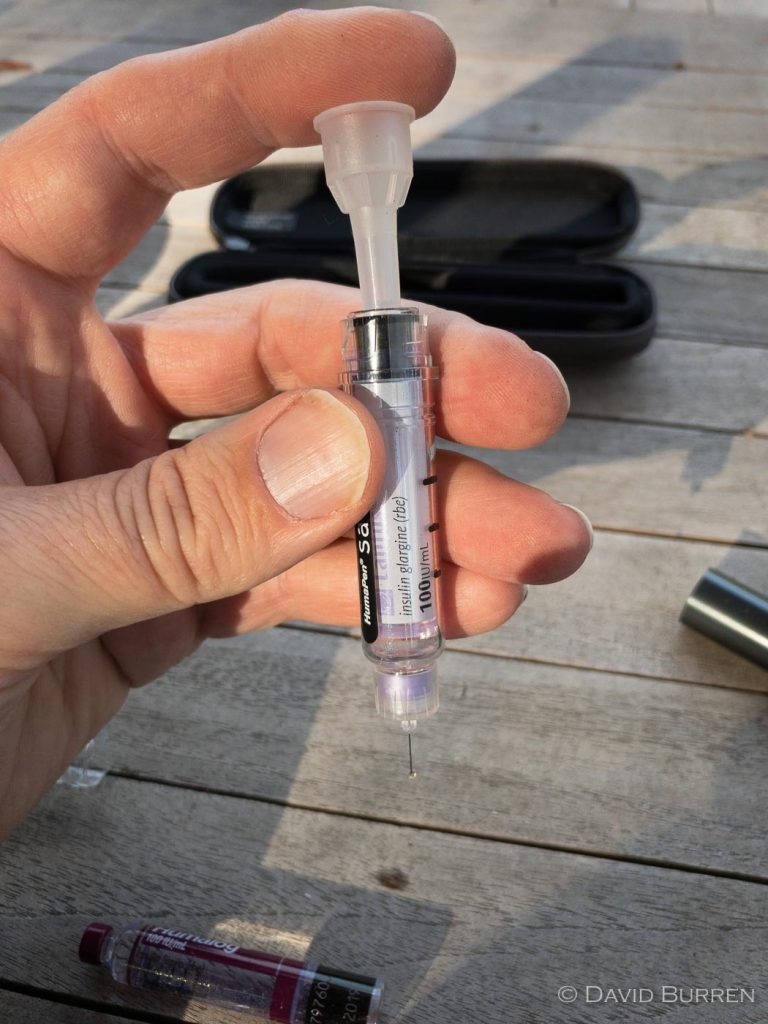 After that the pen goes together easily, and you’re able to inject your 2%-wrong dose.

Note that Novo cartridges use a quite-different design, and are definitely not compatible with Lilly or Sanofi pens. The Novo Pens don’t allow the plunger to advance at all with a Lantus cartridge inserted, so that doesn’t work either.

I say again: this blog does not constitute Medical Advice!

But this trick of being able to use Lantus and Humalog pens interchangeably could one day be a useful trick to have in my kit in an emergency!