The 1st of April meant lots of things in Australia this year:

The Pharmaceutical Benefits Scheme lists the specific drugs available for public prescriptions in Australia, and this month there was a new insulin on the list. Toujeo U300 is a long-acting form of the same drug as Lantus, a common basal (background) insulin used by people managing their diabetes via injections. Lantus was the basal insulin I used before I took up using an insulin pump (where instead of using a long-acting insulin the pump slowly trickles in short-acting throughout the day).

Do note that this article is not Medical Advice in any way: it’s just a summary of the publicly available information about the drug. If you get a prescription for Toujeo then your doctor would be the one giving you advice.

Toujeo is not actually a new insulin: it has been available under private prescription in Australia since late 2016, but now it can be subsidised by the government through the PBS.

Toujeo is only supplied in disposable pen form, and these pens are calibrated so despite the concentration (U300) being 3x the standard we’re used to, the dose you dial up on the pen is still in U so no mental gymnastics are required. The pens appear the same as the Lantus Solostar, except that where the Lantus pens have purple highlights and button, the Toujeo Solostar pens have green. Each pen contains 450U of insulin, and there are two listings on PBS: a box of three pens or a box of five.

Although the drug is essentially just concentrated Lantus, this has some important side-effects on the rate the body absorbs the long-acting insulin. It’s been described as having a length of action of 36 hours. Lantus is shorter, and for some people that works best split into two doses to avoid a gap at the end of the day – Toujeo seems designed for a single dose per day. This is the activity profile chart published by the manufacturer:

The effect isn’t instantaneous after injection of course. The above graph is apparently the result after days of continuous use, with the start of effect combined on top of the tail of the previous doses (you can see the tail of this dose to the right of the “24” line).

The overall effect should be a steadier dose through the day, without the strongest effect putting the person at risk of overnight hypos (sometimes a risk with other long-acting insulins).

If your doctor prescribes Toujeo for you, the doses you take may be slightly different from before, and there will apparently be a period of several days while the drug becomes established and thus the doses would be modified over those days. Your doctor or diabetes educator would work through this with you.

The National Diabetes Services Scheme subsidises consumable supplies for Australians with diabetes. And as expected, on April 1 something new appeared here too. Not quite a new pump, but the consumables for a new pump at least. The reservoirs and infusion sets for the new Ypsopump have appeared on the list, in the lead-up to the official launch of the pump itself (probably next month). 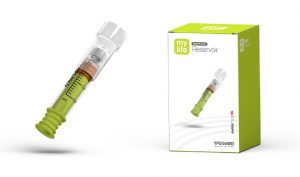 The 1.6 ml reservoir is one that the user will fill themselves (presumably with Humalog or NovoRapid). It’s a glass reservoir, which means you can pre-fill them with insulin and store them in your fridge for up to 30 days before use (the plastic reservoirs used in most pumps should not hold insulin for that long).

According to the pre-release information I read, the Ypsopump also supports manufacturer-filled NovoRapid PumpCarts, but those do not have TGA approval for supply in Australia. Interestingly, the Accu-Chek Insight pump which is used a lot in Europe (but not in Australia at the moment) also uses the PumpCarts, but the Insight’s own self-filled reservoirs seem hard to find. 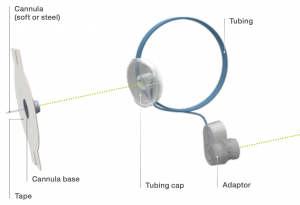 The infusion sets (cannulae and tubing) are the Orbitmicro and Orbitsoft sets. All the Orbit sets have a cannula attachment that can rotate 360˚, allowing flexibility in wear. The “micro” set uses a tiny (31G) steel cannula, while the “soft” set uses Teflon. The sets are described as using a luer-lock connection, but from what I can tell the surrounding of the connector will only allow it to mate with a Ypsopump.