Particularly referring to the products available in the Australian market, hopefully this overview will be useful. I’ll introduce the concept of needle “gauge”, then go on to cover lancets, syringes, and pen needles. I’ll cover pump cannulae in the next article.

The thickness of a needle is measured in the Birmingham Gauge [Wikipedia link]. It’s usually specified with the abbreviation G. For example “29G”. The gauge starts at 00000G (a diameter of 12.7 mm) and goes “up” to 36G (0.102 mm). So the larger the number, the smaller the needle.

The standard only defines the outside diameter of the needle. The thickness of the needle wall can vary (e.g. some pen needles are described as “ultra-thin wall”) which correspondingly affects the size of the hole inside. The smaller the the hole in the needle, the longer it will take to inject liquid (or the faster the liquid has to flow).

But in general we like needles to be as small as possible, because with diabetes we can be stabbing ourselves with them multiple times per day. Every day.

There’s no simple mathematical conversion from the gauge to the actual diameter of  the needle, so you’ll have to refer to this table (I’ve rounded the measurements to the nearest 10 micrometres):

Of particular note is that just from looking at those diameters, 29G and 32G seem like “extras” which have been stuck into the system (again, the gauge is not a simple geometric progression). They’re fairly close to 28G and 31G. This may be relevant when comparing the available needles and cannulas listed below.

The marketing departments of the manufacturers must like this numbering system. Just as with digital cameras and megapixels, they can use the mantra that “bigger numbers must be better”.

Obviously the longer the needle, the further they can poke into our bodies. In general, as long as they reach below the skin’s surface, all our injections are subcutaneous and thus shouldn’t reach down to muscles. So in general we prefer shorter. Over time the medical recommendations for needle length have reduced.

In some emergency procedures people have been known to use intramuscular injections (which obviously are easier with longer needles) but those are special cases which I won’t cover here.

I hate to think what size the lancets were when I started in 1982. I do remember them being very coarse! Eventually I replaced them with BD Micro-Fine lancets which are 33G. The Abbott lancets included with the last FreeStyle meter I received are 27G. Those are about twice the diameter of the BD lancets, although it is worth noting that we generally don’t stab lancets deep into ourselves: we only need the sharp tip to broach capillary blood vessels just below the surface.

I now use the Accu-Chek FastClix lancets with all my BG meters instead, as the whole lancing device is very convenient. Each FastClix lancet drum contains six 30G lancets.

I do still have separate 33G lancets in my first-aid gear, as I’ve found they’re very useful for digging out splinters/etc!

The ones available to us through NDSS today are all 29G or 31G (of either 12.7 or 8 mm length). 12.7 mm definitely seem like “long” needles today. I remember when we were trained to pinch up the skin and inject at a 45˚ angle. But with injections straight down those same needles would reach deeper. This photo is of a 29G 8 mm syringe tip. 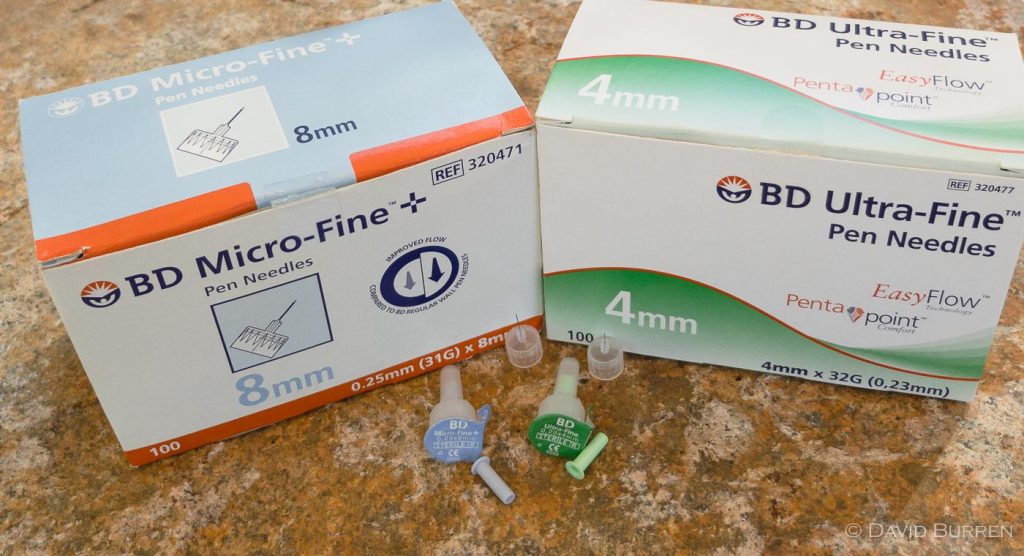 Note that while the ISO 6009:2016 standard defines a colour code for each gauge needle (as seen on the Wikipedia article linked to earlier) this does NOT apply to pen needles. Manufacturers do use different colour labels on needles to separate them, but they also use those colours for different length needles. Always read the label to be sure. 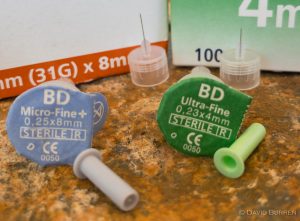 Today the pen needles we can get for free through NDSS range from 29G to 33G in thickness, and from 12.7 mm down to 4 mm in length.

Remember, a thinner needle can also mean a smaller hole in the middle of the needle. And the area of that hole scales as the square of the inner diameter, so it shrinks quickly. But there’s no standard about the inner diameter of each gauge needle, and the needle manufacturers don’t publish any numbers. All they will do is use words like “thin wall” or “ultra-thin wall” on the packaging, to make their product sound better.

Many insulin pens are manual devices where you can control the speed of administration through the speed at which you push down with your thumb.

However some pens such as the Novo single-use (pre-loaded) pens seem to be spring-loaded: once you push the thumb button they push out the measured dose as fast as they can. The thinner that hole, theoretically the faster the insulin will be sprayed into your subcutaneous tissue.

It’s a compromise: the smaller the needle the smaller the hole in your skin, but possibly the longer it will take to inject a dose, and the more internal pressure being applied to your tissues. I recently got a box of 32G x 4 mm needles for backup purposes, and was happy to see they listed “Extra Thin Wall needle” as a benefit of their “EasyFlowTM technology”. But how much difference this makes in the end: I don’t know.

These are also measured in “G”, but I’ll cover them in the next article.