A closed-loop system can only be as good as the CGM that’s feeding it. Keeping that CGM accurate is essential!

I’m currently running an experiment where I’m using a Dexcom G5 sensor and a Libre sensor concurrently to compare the behaviour and results. Mostly they track fairly closely, although at first glance the Libre does seem more stable in some regards. I’ll be able to report more detail on this later. But meanwhile here are a few thoughts for closed-loopers to consider. 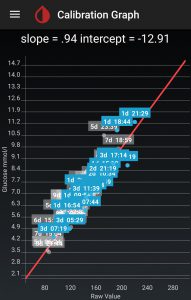 I would be very uncomfortable if I only calibrated once per day and always when in-range! Once I’ve calibrated a new sensor at several levels I get more comfortable, but even then the sensor can drift over time.

I’ve had a case where I woke up and checked the CGM calibration to find it was a pretty good match at 5.8 mmol/l. Then three hours later I could see my loop had dealt with breakfast with my BG only rising to 7.9. Great, I think.
Then I happened to do a finger-prick because my BG is showing a fairly flat line on the graph, only to find that it’s actually 9.3! Yes my fingers were clean. Upon updating the CGM calibration, the loop realised I was higher than it had planned and increased the basal rate to compensate, bringing the levels down. 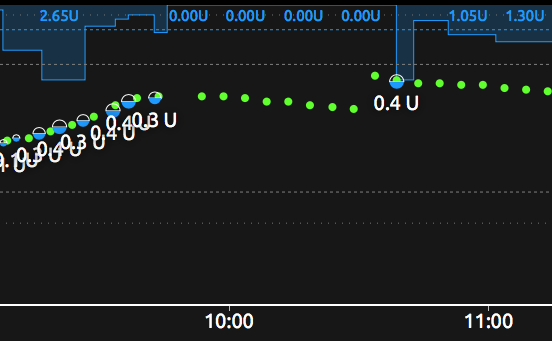 It turned out that it had been some days since I calibrated at around that level, and the required calibration had drifted.

Be careful about drug interactions

I also had a case where I’d taken some paracetamol (acetaminophen to our friends in the US) which I knew was going to interfere with the Dexcom readings compared to the finger-prick results. I recalibrated the Dex appropriately, and the data seemed to be tracking reality through the remainder of the day whenever I checked the calibration.

But then I went to sleep, and woke up in the morning with my loop telling me I was running stably at 5.2 mmol/l. But I didn’t feel like I was at 5.2. I tested and found I was actually at 3.2 mmol/l, which is a significant difference! It seems the drug’s effects had worn off while I slept, and the calibration was now significantly off. It’s understandable why many people using CGM sensors avoid paracetamol/acetaminophen.

Recalibrating and treating the hypo soon brought my levels back up, with the loop controlling the rise and levelling me off before 6 mmol/l.

A closed-loop can only deal with the data it’s given, and it’s critical that the CGM data is accurate. Consider this when selecting a CGM to use, and also keep it mind when you’re deciding to ignore the calibration alerts and just let the system ride. And do remember to calibrate at multiple levels!