Blood glucose meters are an essential tool for anyone with diabetes. Even those of us using Continuous Glucose Monitors need to manually check every now and then (e.g. to regularly calibrate the CGM). I’ve used many different meters over the years, but this isn’t going to be a history lesson. It’s more about some of today’s fancy BG meters that can link wirelessly to your pump or CGM. Primarily it’s about the meters available in the Australian market, but a lot of this will also apply to other regions. 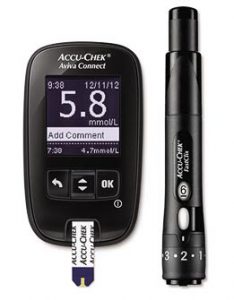 This little meter has Bluetooth, allowing it to be connected to the Accu-Chek Connect app on your Android or iPhone. Tests automatically upload to the phone, and the meter’s internal clock is kept accurate. A USB port allows the data to be transferred to services like Diasend and Tidepool. The meter uses two CR2032 batteries.

I had one of these meters for a while, but passed it on to a family member for her pregnancy. This model seems to have recently been replaced by the Guide (below) but the Aviva test strips are shared with some other models and are still available. 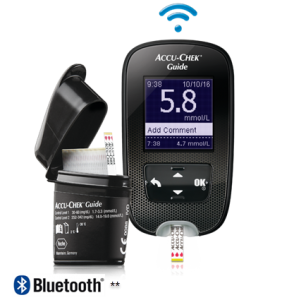 This is essentially a later version of the Aviva Connect. It uses different strips, and is slightly smaller although it uses the same batteries. Its significant new features are:

If you had to buy one of these meters it might cost you around AU$40 at a pharmacy. But here in Australia most BG meters are free if you ask the manufacturer for one: they make their money later from the test strips (either at retail price or subsidised through the NDSS). If you’re after one try asking Accu-Chek or your diabetes educator.

I have a Guide meter and the Bluetooth is very useful! I did explore Accu-Chek’s app, but instead now have it paired to xDrip+ on the Android device which is my CGM. This should also be possible with the Aviva Connect meter. Before it turns off, the meter will connect to xDrip+ and upload the data. xDrip+ then asks me if I want to use the reading for calibration of the CGM. It’s all auto-magic! 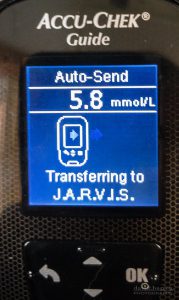 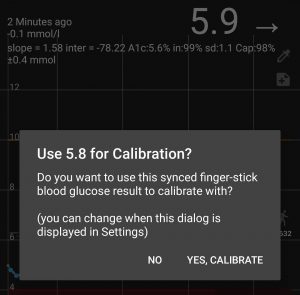 No more getting distracted after doing the test and before entering the blood test value into the CGM for calibration!

A fly in the ointment

However, setting up the pairing with xDrip+ was slightly confusing. It seemed like the handshaking didn’t quite work: xDrip said it was paired, but the meter said it was still trying to pair. xDrip+ wouldn’t let me enable the Bluetooth menu section (presumably because the pairing didn’t take). This flummoxed me a few times, and I cleared the partial pairing via the Android Settings app and on the meter. Then after a later attempt I just put the meter aside but then had to do a BG test to calibrate the CGM, and I hadn’t cleared the settings. The meter dutifully tried to send the result to xDrip+, and this seemed to complete xDrip+’s handshaking and suddenly everything was working.

Ok so there is a little history here, but bear with me.

The Contour Next family of meters all use the Contour Next test strips, which are renowned for their accuracy and precision. These meters are made by Bayer (who then changed their name in the US market to Ascensia although you’ll still see Bayer branding on devices).

The Next USB model is no longer available, and didn’t have wireless linking, but its design (derived from the earlier Contour USB) was carried over to later meters so it’s worth describing. There really have been a lot of Contour models over the years!
One end of the meter pulls off to reveal a USB port, allowing you to recharge the internal battery and to download data through Carelink, Glucofacts, Diasend, or Tidepool. The meter is physically small, but you do need to be careful to not lose the USB cap.

This meter was designed to talk to the Medtronic Paradigm/Veo pumps (via 900 MHz radio) so that your test result can be used for correction boluses and to calibrate the pump’s internal CGM. Otherwise its physical design is very similar to the Next USB.

Those pumps are still supported by Medtronic, who are happy to sell you one of these meters for AU$150 (which is astronomical compared to most meters). 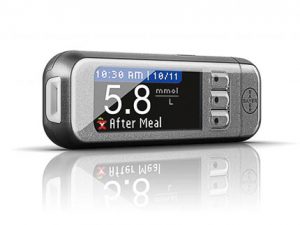 This meter is supplied as part of the package with Medtronic’s 600-series pumps (such as the 640G and 670G). These pumps use a different radio frequency (2.4 GHz) and protocol than the older pumps, but otherwise I believe the features are the same. If you need an extra meter, again Medtronic will sell you one for AU$150.

Incidentally, the USB port of this meter can be used by the Nightscout Uploader to extract live CGM data from a 640G pump and feed your Nightscout site so that friends/family can “follow” you.

Ascensia Contour Next ONE 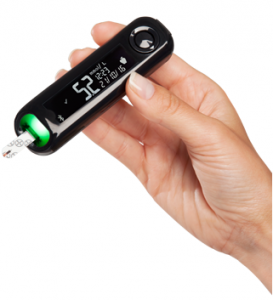 This meter is a new 2017 model, and while it shares the heritage of the Next LINK meters it has been simplified in some important ways.

Next to the test strip port it has an LED, which lights up white so you can test in the dark just like the Accu-Chek Guide. After testing it turns red/green/yellow to indicate if the reading is below/within/above your target range.

It’s thinner than the earlier Next LINK meters, partly through not having a full-size USB port with pull-off cap. Instead it just has a tiny MicroUSB port for downloads, and instead of recharging via USB it uses CR2032 batteries (like the Accu-Chek meters above). It won’t connect to Medtronic pumps, but it has Bluetooth to connect to the Contour phone app. Or you can connect it to xDrip instead.

Using a Next ONE in Australia

The Next ONE is not sold in Australia, but is available from the US for about AU$30 including postage. It’s also available from Europe but the cost is higher. The Contour Next test strips are available here through NDSS as they’re used by the Medtronic-bundled meters.

I wanted a meter to be linked to my backup looping rig so I picked up an American Next ONE, and not surprisingly it reports the glucose level in mg/dl units instead of the mmol/l we use here in Australia. A European Next ONE would presumably use mmol/l. The meter models are physically different: instead of a dot-matrix display it has all the symbols as LCD elements, and when there is no “mmol/l” symbol it can’t be changed through a menu.

But as it happens this isn’t a problem for me for two reasons: 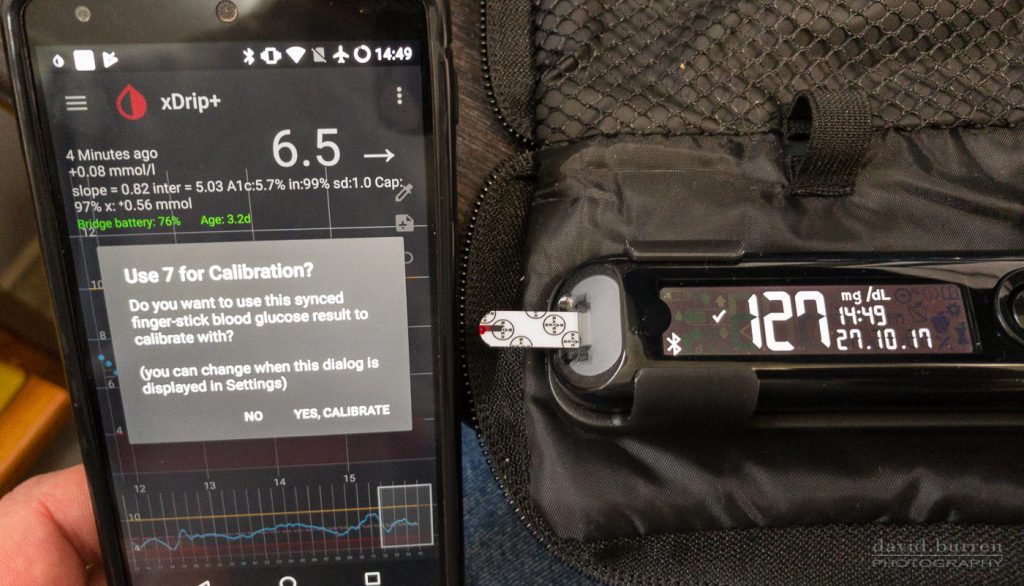 Another issue for any Australian users of the Next ONE is that Ascensia’s “Contour Diabetes” Android/iOS apps are not available in the Australian Play/App Stores. Without that app you can’t set the meter’s target range (which is used to decide whether to display red, green, or yellow for test results). By default the boundaries are at 70 mg/dl (3.9 mmol/l) and 180 mg/dl (10 mmol/l). But for me the colour of that LED isn’t a major concern.

Unlike the Accu-Chek Guide, the Next ONE sends the result across almost immediately, instead of waiting for the meter to start shutting down.

There are of course many other meters available in Australia. However none seem to have Bluetooth/etc links although most can be downloaded to a computer later via a USB port.

It’s in the manufacturer’s interests to get their meters used, so it’s not hard to gradually build up a collection. They all have slightly different features, so you’ll probably end up with a favourite.

Having more than one meter can be useful if you’re ever worried about the accuracy of your results. The standard for meters is that 95% of the time they should be within 15% of the correct value, but if you have three different meters and set them up side-by-side you can get some reassurance about the spread of results.

I’ve used many over the years, and in fact we have some stashed around the house. I have a meter beside the bed in case I need to double-check and/or calibrate the CGM in the night. We have a FreeStyle Optium Neo in a kitchen drawer so everyone in the family knows where to find it if there’s an emergency (and it can test for ketones as well as sugar). I have the Guide (the one I usually use) in my kit that travels with me, and there are some extras too. The Libre Reader also uses the FreeStyle Optium strips. The Accu-Chek Mobiles which a few years ago were my primary meters will probably be dispersed to family members. But none of those meters link wirelessly to your phone or CGM.

The old BG*star meter would transfer data into an iPhone’s 30-pin dock connector, and the original Dario meter connects via the phone’s headphone socket. These are both connections which have disappeared from new phone models, but Bluetooth is likely to be around for some years to come.

If you use xDrip+ as your CGM, I encourage you to look into a Bluetooth-connected meter. It really does remove another complication from our daily routines!

The Accu-Chek Guide and Aviva Connect meters are the only Bluetooth-equipped meters I’m aware of that are currently available in Australia, and especially for the xDrip+ support I do recommend them. The Guide is the nicer option but the Aviva Connect is quite good too. The Contour Next One is also excellent but a lot harder to find here, especially in the mmol/l version.