The Omnipod DASH pump system launched in Australia recently, and I’ve been able to experiment with it a bit.

Note the Omnipods I’ve been using were purchased by myself, not supplied by anyone else.

As has been mentioned many times, these pumps are not currently supported by private health insurance or by NDSS, but once you’ve gone through official pump training and been started on the system by your DE, you can buy boxes of them (10 at a time) for effectively $40/pod. That’s $40 for every three days, which adds up fairly quickly.

But this article is more about some of my observations from using the Omnipod. Hopefully they’re useful.

Because of the cost involved, I don’t think I’m likely to use these full-time. I’m quite happy with my traditional pump (which in fact has a bunch of advantages for me). But the option of keeping the pump attaching during swimming/etc does open up some interesting options for “weekends away” in the coming summer.

So my basic plan is to just buy an additional box from time to time as convenience and budget align. I know I’m not the only person considering this scenario.

From the time I opened up the box through to actually using some of the pods, a few things have come to light that might be of interest.

If the pod comes off, it can’t be reattached. You need to fill a new pod with insulin, attach it, and get it started. So you need to have a spare pod on hand, along with insulin to fill it with (the pod package includes a syringe, which can be filled from either vials or pens).

With my traditional pump I might carry a spare infusion site, but rely on the insulin that’s still in the pump. I might have a spare pump reservoir and a spare battery, but these are smaller and in some ways simpler to deal with than spare pods and insulin.

The pump can take up to 200U of insulin, which has to last you for up to 80 hours. The pod warns you at 72 hours (3 days) that it’s time to change, but it does give you 8 hours of grace. For me I found it safest to fill with ~150U to cover my usual needs with a bit of buffer.

If you use more than 60U per day you’ll have to change the pods earlier, which obviously adds to the cost.

Do note that the system will only tell you that the pod has 50+U. Once you get below that it will give you more precise numbers, but you need to have some confidence that you’ve filled with the needed amount. The provided syringe setup makes this fairly straightforward. Incidentally the needle on that thing is a bit shorter than 4mm! Still long enough to puncture the vial though.

For people who don’t use a lot of insulin, it’s worth noting that officially the pump wakes up (and beeps) when you’ve put 85U into it. The instructions point out that you need to complete the fill and don’t be surprised by that beep.

Apparently (and completely unofficially!) if you inject the insulin fast enough you can make it trigger closer to the 65U mark, but I don’t know if that ends up producing a “froth” inside so wouldn’t encourage it. 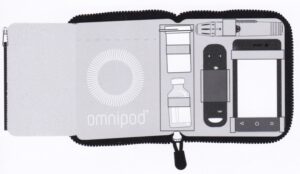 In the US the DASH PDM can pair with a Contour Next One BG meter so that glucose measurements are fed straight into the system for bolus calculations.

In Australia even though those meters are common, Insulet apparently did not include this in the system they got TGA approval for, and the PDM does not include this function. Mind you the supplied PDM case still came complete with illustration (seen above) showing the Contour Next One meter, tub of Contour Next strips, and MicroLet lancing device. It’s also still mentioned in the pump training materials (or at least was when I did my training).

Never mind: it’s not hard to transfer BG numbers in manually when required (from meter or from CGM).

The PDM splits your insulin needs into two sections:

This sort of setup is used in a variety of other pumps too, but there are some pod-specific gotchas such as this one:

The PDM knows which basal program is active, and when you have others you can “activate” any of them. It then loads the new program into the active pod that’s feeding you insulin. But if there’s no active pod (such as if you’re about to swap back to pods from another pump or from MDI) you can’t activate a program. You can configure programs while you’re not connected, but you can’t activate one.

If the current program is not the one you want to use, you’ll have to remember to activate the new program as soon as you’ve started the new pod. It will initially be started with the PDM’s current program.

Admittedly for most people just going from pod to pod to pod this won’t be an issue to consider.

Insulin is administered by the Omnipod in 0.05 U chunks. Internally the mechanism is a spring coiled around a screw that drives the piston forward, with interlocking teeth that allow it to advance in steps: each equating to 0.05 U of insulin.

So the smallest bolus is 0.05 U, and goes up in 0.05 U steps. And the basal U/hr rates are also measured in 0.05U chunks (you just get more and more “steps” administered per hour as the rates go up).

There’s a note in the manual:

The user should consider bolus dose accuracy when setting a bolus dose. When using the lowest bolus dose allowable (0.05 units), the actual bolus delivered may be as low as 0.00 units or as high as 0.10 units.

Quite a sobering thought, especially in a looping world with SMBs (“super micro boluses”) where tiny boluses might be given every 5 minutes depending on what the BG data is doing. But hopefully that warning is describing situations where a 0.05 U bolus might result in nothing, but in that case the next one would be likely to produce 0.10 U and thus average out (even if the timing is slightly off).

I have thought for a long time that automated insulin delivery (AID, or “closed loop”) systems are probably going to be key in overcoming this shortcoming of the pods. If the system realises the previous dose didn’t have the desired effect, it will correct from there (even if the results are a little “bumpier” than they might be otherwise).

Insulet’s own Omnipod 5 system (used to be called “Horizon”) which involves upgraded pods which run the loop locally (talking directly to Dexcom G6) is still in trials, so isn’t a product anywhere in the world. But it’s definitely on their roadmap.

The earlier non-Bluetooth “Eros” Omnipods (which we can’t get in Australia) can be used with AndroidAPS and with Loop to run “DIY” closed-loop systems. For a long time the DASH pods have not been loopable though.

But a driver for the current DASH Omnipods is coming! I have been using a development version of AndroidAPS to talk to the pods, and it works quite well. I’m looking forward to it making it through to the public release of AndroidAPS soon (but don’t know timings on that).

But don’t assume from that graph that this is what looping will automatically give you with an Omnipod! After 4 years my own looping setup is fairly finely tuned, and the selection of pump does not change my clinical results that much.

It’s good to see another pumping option appear in Australia. And from my perspective another loopable (soon) option is even better!