With insulin pumps there are components we need to regularly replace. We need to put in a new infusion set (or at least site) every 2-3 days, and we also need to replace the insulin reservoir with a fresh one when it empties. But how much “stuff” we need to carry to complete this can vary a lot.

In this article I’ll show you the “refill kits” I’ve used with two pumps: the Accu-Chek Combo and the YpsoPump. They’re a bit home-grown, but they get the job done.

Here’s a complete kit for the Combo, in as compact a form as I could arrange. 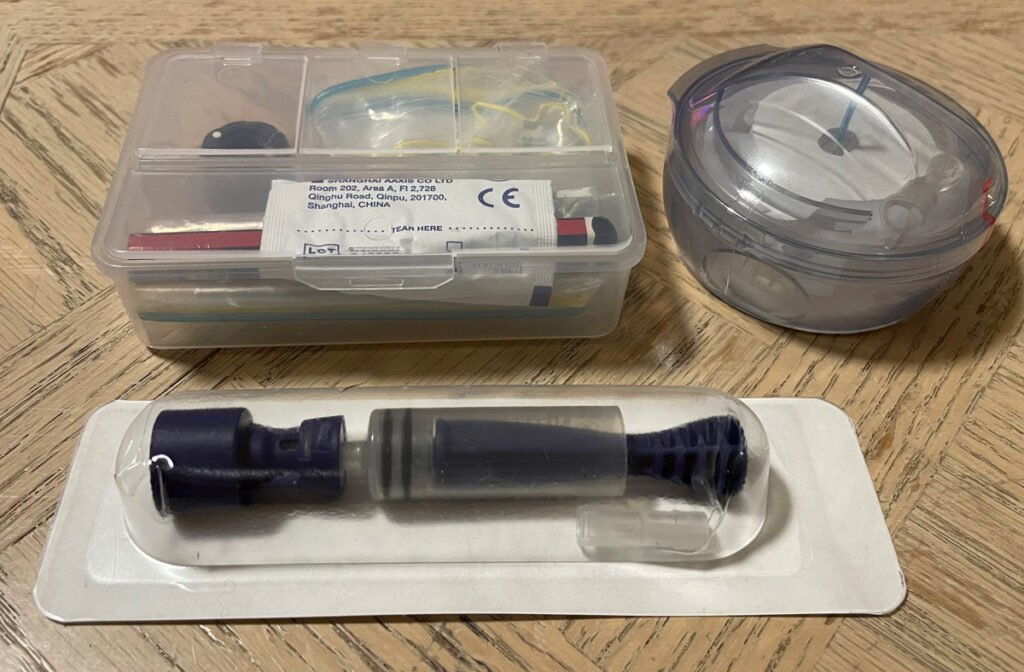 In the foreground is a new reservoir (with transfer adapter for connecting to an insulin vial/cartridge). On the right is an Inset II infusion set (used here for comparison with the other kit). And on the left is a plastic box with lots of “bits” in it. Here it is broken apart: 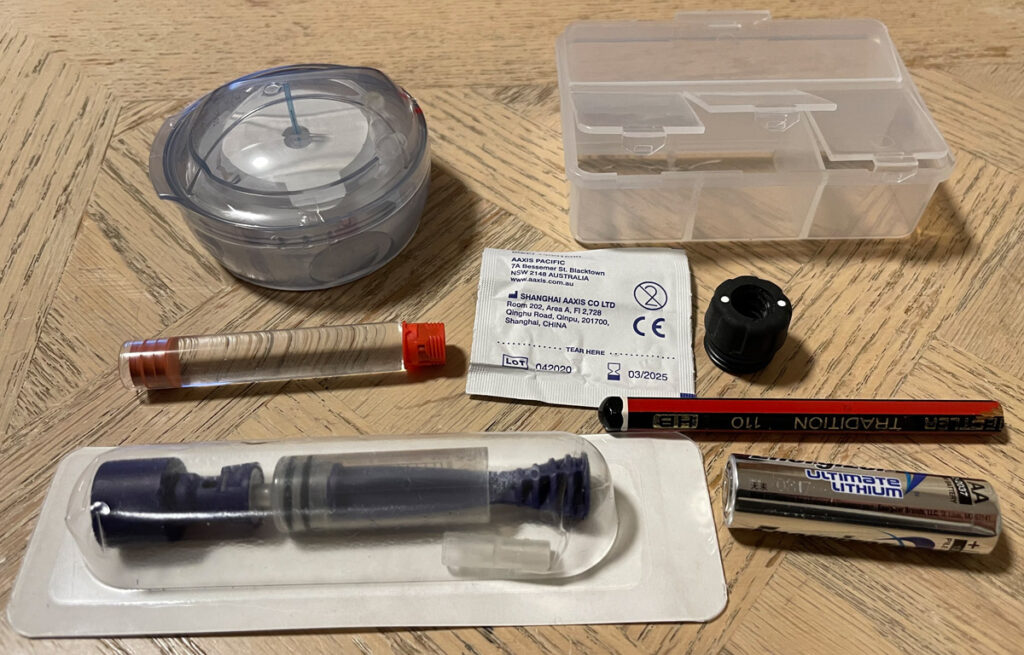 Squeezed into that box was:

When it’s time to refill the pump, this kit (which didn’t take up a lot of space) included everything I needed to do the job. But the comparison with what I use for the YpsoPump is striking!

This kit is a lot smaller! 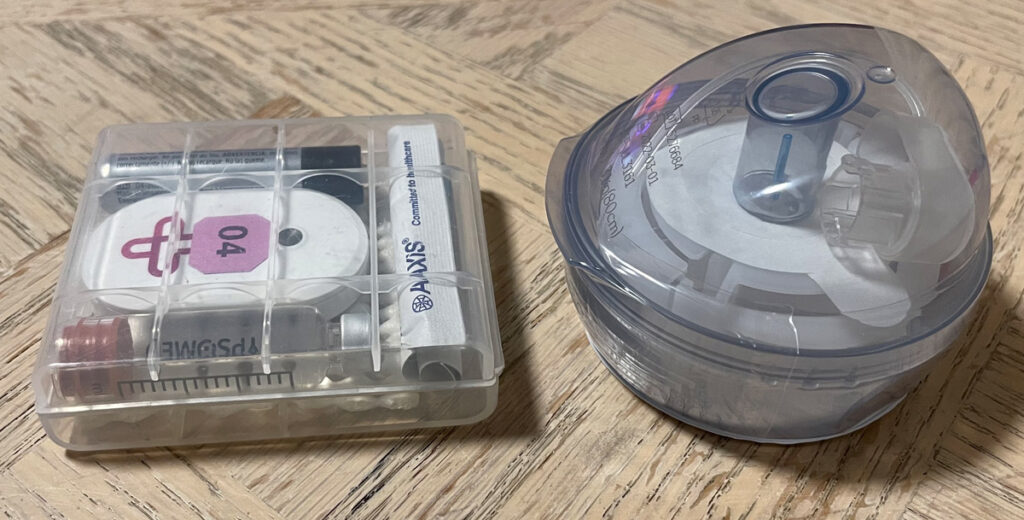 On the right is a YpsoPump Inset II, which is the same size as the Inset II set shown above. The only difference is the larger pump connector on the tubing, and thus the domed lid of the inserter is lop-sided (exactly the same as the Medtronic Mio).

The small box on the left contains the magic. Part of the reason it’s smaller is that with the YpsoPump I can pre-fill batches of glass reservoirs (using transfer adapters/etc) about every month. So there’s some paraphernalia which doesn’t have to appear here: this is all I need to refill the pump.

Ypsomed provide a convenient 12-reservoir storage box to put into the fridge, although it’s not a convenient size to grab and put in your pocket. Bit it’s easy to grab a single reservoir from the fridge when I need it.

I started with a plastic AA/AAA rechargeable battery case, designed to hold 4 batteries of either type. As a photographer I have many rechargeable AA batteries (e.g. for flashes) which came with these cases, but they’re also available separately on eBay. 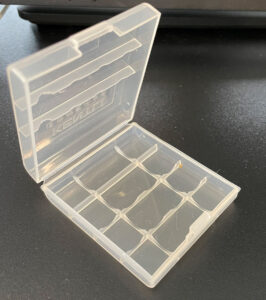 Here’s one open. Four AA batteries would fill the entire box (each running up to the right in this image). One of the separating fins has no groove cut into it, and four AAA batteries would fit up and to the left in those grooves across the remaining three AA bays. The nipple of each AAA just hangs over that fin.

If you look at the very left of that image you should be able to see that with a craft knife I’ve enlarged the left-most slots in the upper fins. You’ll see why in the next image. 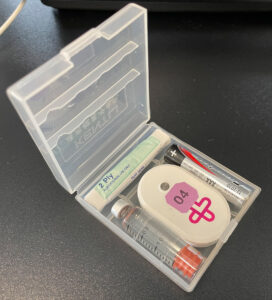 I put in one alkaline AAA battery (which is what the YpsoPump runs off for a month) on one side, but on the other I’ve placed a YpsoPump reservoir full of Fiasp. In Australia we don’t get the pre-filled PumpCarts, but once you remove those from their foil packaging they’re exactly the same. It’s a bit thicker than an AAA, which is why I had to modify the case very slightly.

Nestled between them is a MedAngel One sensor. Not only does it fit neatly, but it also tracks the temperature of the insulin and alerts my phone via Bluetooth if it gets too warm!

Across the top is a rolled up alcohol swab, again used for swabbing the top of the reservoir and/or preparing a pump site.

Together (and even when combined with the YpsoPump Inset) I think it makes a neat package. 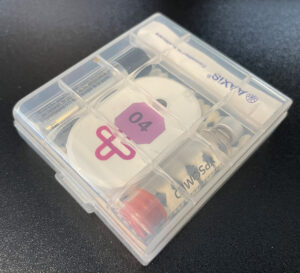 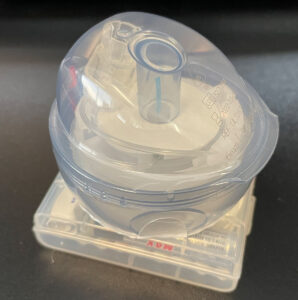 I don’t carry this kit around all the time. Most of the time it’s at home and ready to go, and on a day I’m going to do a refill I grab a reservoir from the fridge, drop it into this case, and head out. The insulin’s good for 28 days out of the fridge (and is going to spend a while in the pump) and in general it would probably be OK being carried around for a week before putting into the pump. But I tend to leave it in the fridge until I know I’m going to need it.

When it’s time to actually reload the YpsoPump it’s a quick and simple operation, which I wrote about a few months back.