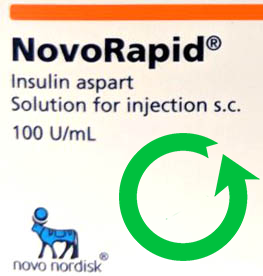 For years I used Humalog as my “fast” insulin (before that I used Actrapid!) so when I moved to Fiasp that’s what I had to compare with. I’ve recently experimented with switching back to Humalog to check my settings, and the results were interesting. Including that my no-bolus, no-announce closed-loop system still worked. I have in the past experimented with Apidra, but wasn’t interested in updating that comparison now.

But what I have done is experiment with NovoRapid, which is the “Humalog equivalent” insulin that many people are familiar with. It’s also the base of Fiasp, so could shed some light on the differences I found between Humalog and Fiasp.

To recap, the insulin names are:

Questions I had included:

What did I do?

I’ve now spent several weeks using NovoRapid and tuning my settings so that my BG results remain within range. As I expected, a few different settings needed tweaking.

Through all of this I’ve been using the same CGM system (G6) and the same pump (YpsoPump OPN). To my knowledge all the samples of insulin have been kept in appropriate cold storage chain before their use. I have to trust my pharmacies, and then I keep them here in monitored and temperature-controlled storage.

Note that I’m not just setting basal rates and doing the occasional bolus for meals, I’m using the oref closed-loop algorithm in AndroidAPS to manage my insulin dosing. I seem to have it tuned fairly well, as it’s being a “closed-loop” and not a “hybrid closed-loop”.

I have not bolused manually for meals or corrections, and in fact I usually don’t even declare food intake (which is usually several hundred grams per day when I do bother to count it). I don’t do any boluses, but the system doses me with insulin automatically through the day and night. I do try to warn the system when I’m exercising.

So with that behaviour as a stable baseline, it’s been useful to look at what things I’ve had to change with each insulin to achieve similar results.

But you’ll see further below that the average total daily dose (TDD) of insulin varies between all three.

My ISF has to be a lot more aggressive with NovoRapid dosing than Fiasp (~35% more). This makes sense, as especially in the first two hours much less of the NovoRapid has effect (according to the activity profile graphs below).

However the ISF also has to be a bit stronger with NovoRapid than Humalog.

Mind you, it’s worth noting that the steps available to me for ISF were only 0.1 mmol/L per U. So there’s a lot of scope for rounding errors. When moving from Humalog I could change it by 4.5%, 9.5%, but I had to go to 15%! I’ll go through this later in this article.

As I’ve explored elsewhere, the number for “duration of action” for insulin in the model used by the oref algorithms is different to the numbers used in many traditional pumps (and different to the number used in Medtronic’s HCL systems). Along with the time-to-peak-action parameter, it defines an exponential curve. These are not the “insulin activity” times you’re used to!

The numbers I’ve ended up preferring are:

The default constraints in AndroidAPS have the duration limited to 7 hours, so I had to make some local changes to the limits in my copy. It’s also possible if you set your “patient type” to “Pregnant”, but if so you need to carefully check all the affected safety limits (listed in the AndroidAPS documentation). This may change in a future update to AndroidAPS.

With NovoRapid I started out with 7 hours, but noticed things didn’t always quite work right. For example my BG suddenly crashing in the middle of the night (many hours after the dinner spike in insulin). So I moved to 8 hours, but after a few days similar things happened. Then 9 hours, and it’s been stable ever since!

The fact that it aligns with the 9-hour duration that works best for me with Fiasp (which is essentially NovoRapid with an accelerant) does make a lot of sense. 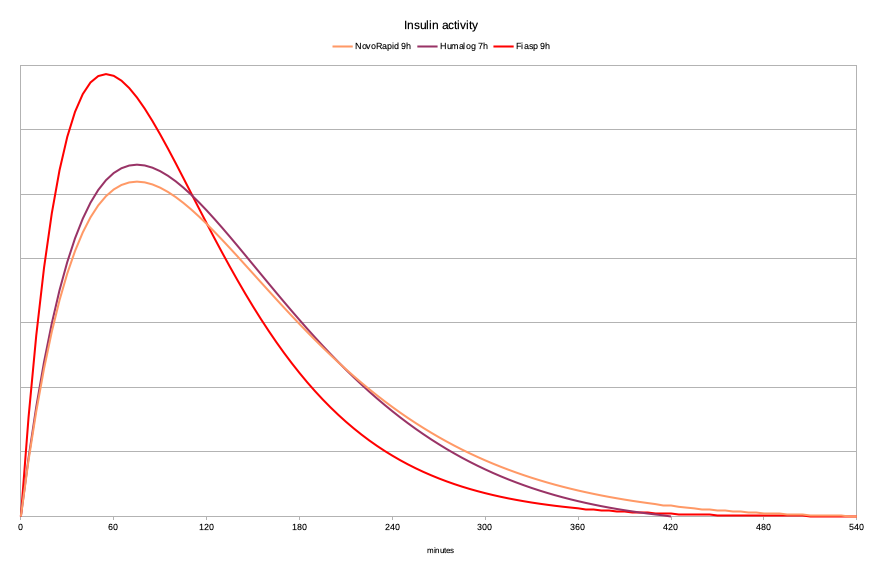 Of course these are just the mathematical models being used by AndroidAPS to model the insulin activity. They were designed to match the manufacturer-published insulin data, although I suspect they weren’t designed around this level of precision, especially many hours after administration.

The earlier the activity peak, obviously the more insulin gets used earlier. This shows up in the IOB (insulin on board) calculation: 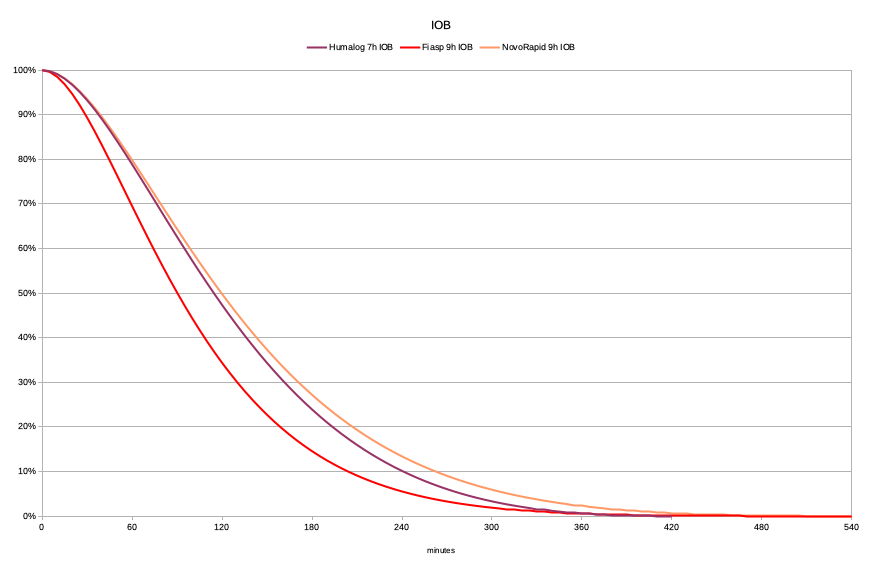 Having the IOB drop away faster with Fiasp makes exercise easier to manage (e.g. for my bike riding I find it helps to minimise the IOB before I set off). I’m still looking forward to getting access to Lyumjev which drops away even faster.

Those NovoRapid and Humalog lines already separate a bit, but if we invert that graph and compare the relative amounts of used-up insulin I find the numbers more enlightening: 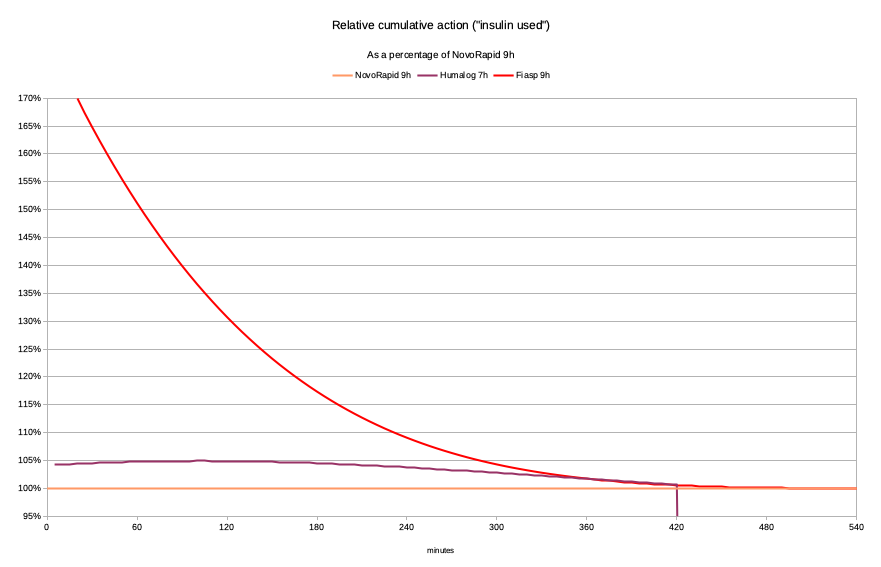 As you can see, just that change in duration for NovoRapid (from 7 to 9 hours) results in a model that predicts less activity over the first 2-3 hours. If these models are accurate, that would be a 5% difference between NovoRapid and Humalog in the 1-3 hour window.

Meanwhile, the other settings I’ve had to use (and how they relate to Humalog) are:

Why is my ISF dosing 9.5% more NovoRapid than Humalog (the inverse of 91%)? Actually with the limited ISF precision available to me it might have needed a little more.
I was tossing up between using 2.0 and 2.1. So we should say an ISF somewhere between 9-15% more aggressive.

The graph predicted 5% to factor in the earlier overall action (shorter tail) of Humalog. If the activity profiles of these insulins was identical, that 5% would disappear. When we multiply the 5% and the 4-6% (higher total daily insulin required), the result predicts an ISF difference of 10-12%.
Towards the bottom of that 9-15%!

Let’s look at some statistics:

These are relatively short periods, with regular “life” things going on. For example NovoRapid only got 13 clear days because the next day my third NovoRapid reservoir emptied and I figured it was time to switch back.

I was surprised to see the CV for NovoRapid drop to below Humalog’s 33%, but then there were some outlying CGM spikes during the Humalog time that were more error than real data (see the graphs below).

I was not surprised to see the 3.9-10 TIR approximately the same, but I was impressed by NovoRapid’s TIR for 3.9-7.8.
But again there will be real-world variation in these: I’m used to seeing slightly higher TIR for Fiasp most of the time (and fully expect to see it jump back up when I transition back to Fiasp).

Now for the AGP graphs. First NovoRapid, then Humalog, then Fiasp:

I’m sure if I ran these for longer the bands would cluster together even more. For example some of the overnight lows with Humalog and NovoRapid were from early on while I was tuning the DIA. Overall the differences are not dramatic.

There have been a bunch of fascinating observations from this exercise, including:

As long as Fiasp works (some people have reactions and find it doesn’t work well) it’s the fastest option we have in Australia at the moment. Based on my experience I would expect that someone moving from NovoRapid to Fiasp would see a larger difference than someone moving from Humalog.

But of course all this is “N=1”. Just the way these insulins behave in my body, not averaged over a large study cohort. 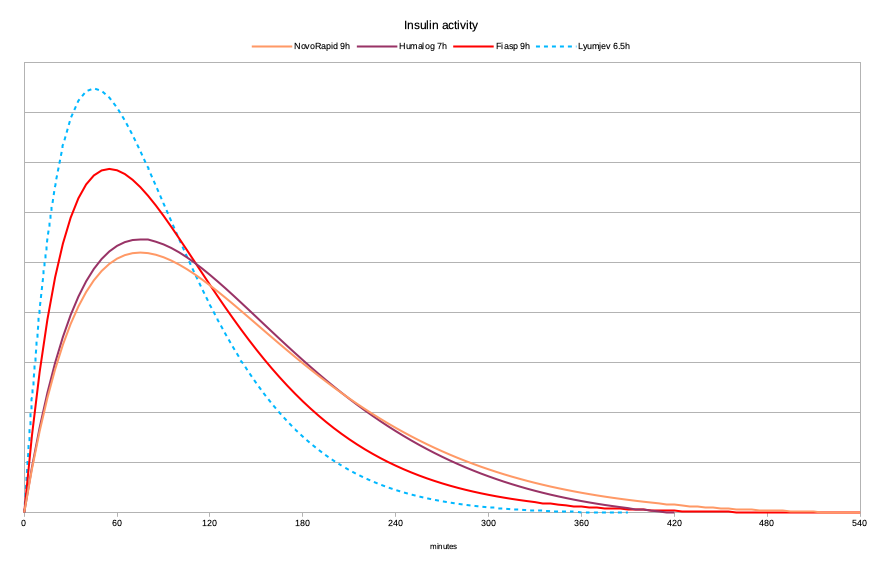 I look forward to the day we get access to Lyumjev in Australia!

In the meantime I’m not planning any further insulin experiments for now. It’s back to Fiasp I go…

After returning to Fiasp, things settled down quite quickly. Looking at 7 days of data and comparing with the earlier Fiasp sample:

That’s a slight improvement in a couple of places over the earlier Fiasp sample.

But just to show that life varies a lot, I think it’s worth noting that one of those 7 days involved eating the voluminous output of a Mexican cooking class my partner participated in. It was very tasty, but not especially low-carb (or low-GI). If I discount that day the stats look like this instead:

Again, this is without counting carbs or bolusing at any point.

Averages play a big part in our lives. Usually I deal with longer-term (e.g. 90-day) periods and events like that disappear into the averages. There are some limitations with the 14-day periods used earlier in this article, but the bottom line is that I wasn’t interested in investing 6 months of my health on the 3-way comparison!