I have previously written about issues with DIA (“duration of insulin action”) and the values we use in traditional pumps and in loop systems. This is an exploration of some of the recent work on tuning my own loop that’s affected by this.

First, let’s look at a visualisation of the “Insulin On Board”, with three lines: 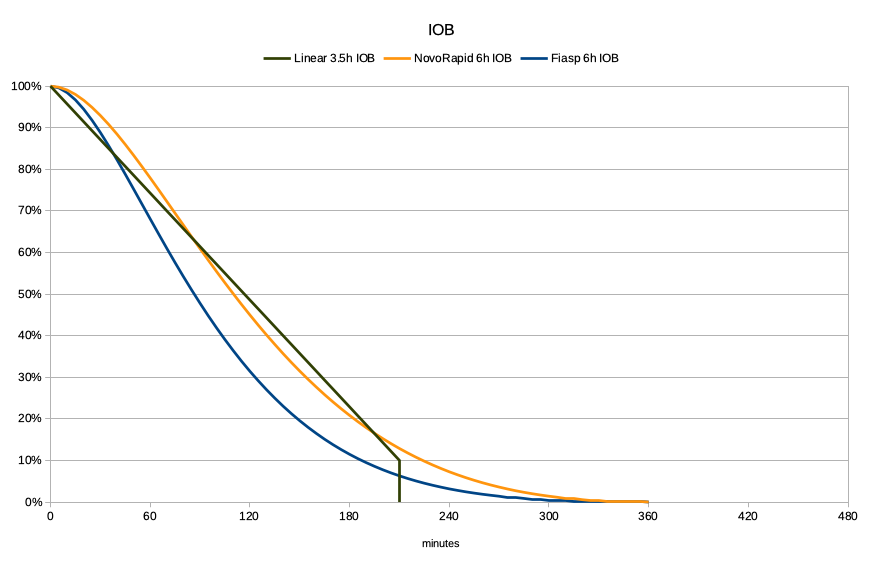 Because in our loop systems this information is used to model the insulin not only from the occasional bolus (as in a traditional pump) but in fact from every bit of basal and bolus insulin, it’s important to know what’s going on in that “tail” out to the right.

Lots of little bits of insulin can add up, so those tails can have significant effect. If the loop doesn’t know that insulin is there and active it can think we need more, and bam we end up going low.

However, I (and quite a few others) have been finding that Fiasp tends to have a tail much longer than 6 hours. In my current experiments I have been having success at 8 hours, so that’s what I’ll illustrate here. I’ve gradually moved the declared duration out in half-hour increments, and the behaviour of my system has been becoming more predictable. But I know of one person in Europe who’s settled on 8.9 hours, so I might not be done yet. 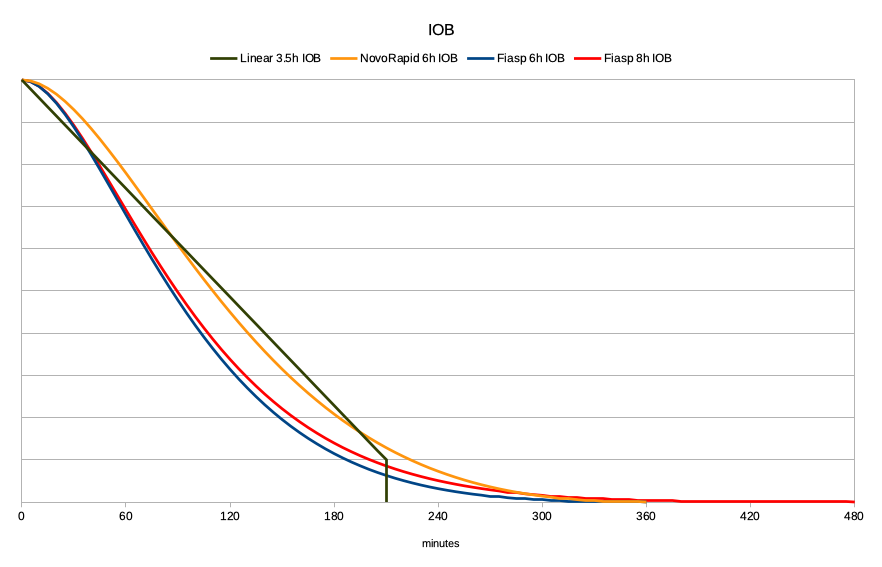 As you can see, that red tail out to the right is very thin, but it also results in changes earlier.

How long is the tail really?

The real-world behaviour of insulins is certainly not the simple linear model that bolus calculators tended to assume. This is is explored in Tim Street’s 2017 article which I linked from my earlier work. And if anyone’s looking for material in peer-reviewed medical journals about this it’s hard to look past the 2010 “Confusion Regarding Duration of Insulin Action” by John Walsh, et al.

The published documentation for Fiasp from clamp studies only shows measurements out to the 5-hour mark. At that point the concentration was low, and similar to NovoRapid. It seems that the study authors weren’t concerned with the details when it got down that low. But they were probably not dealing with closed-loop systems and thus concerned with the cumulative effect of “stacked tails”.

The study data certainly matches the behaviour of our models over the shorter timeframe, but we’re left to test how they match our real-world experience with the insulin over longer timeframes.

Active insulin rather than IOB

What I’m usually more interested in is how much insulin is active in me at any point rather than just how much is still “floating around”. Although that’s important for some calculations too. 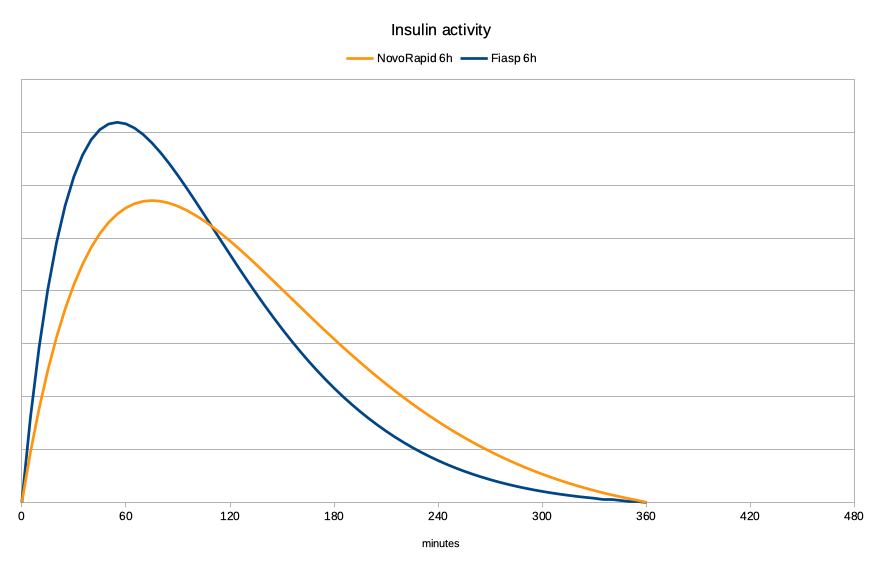 The peak for NovoRapid is generally accepted as being 75 minutes, with Fiasp peaking at 55 minutes. As you can see, the Fiasp becomes noticeable in effect much earlier, peaks, and then drops away. That “faster-on, faster-off” activity is great for a closed-loop system.

It’s sometimes easiest to think of the area under this graph as the insulin getting used up over time. The same amount of insulin is used in all the graphs in this article, so the areas should be comparable.

But let’s look at what happens if the Fiasp activity actually lasts out to 8 hours: 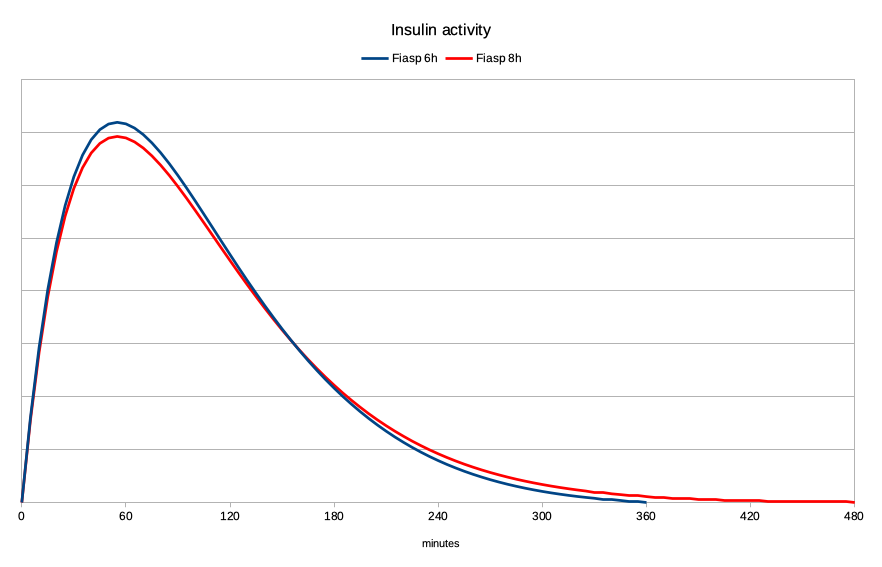 The peak is slightly lower, and there’s a significant increase in activity later. When we compare the levels against each other it becomes quite dramatic: 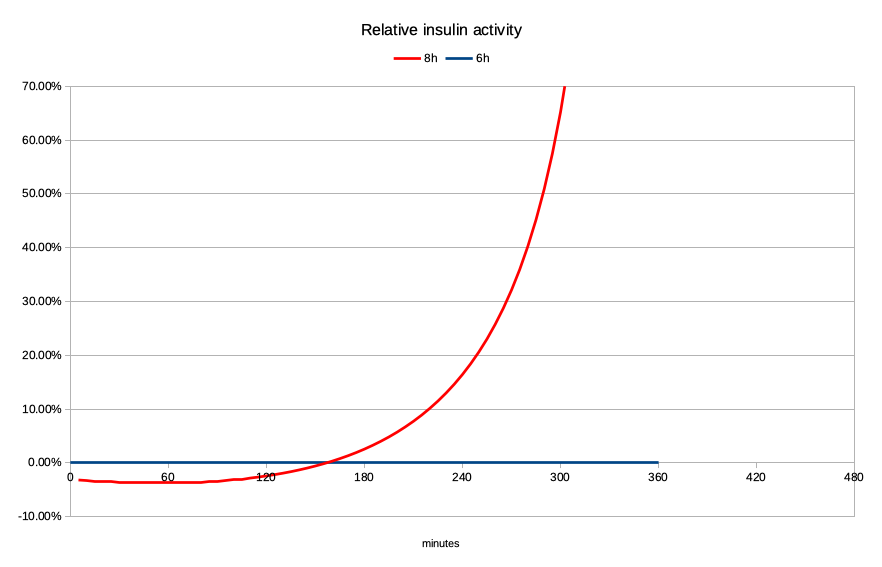 Yes as we get out to the right of the graph the activity levels are quite low, but proportionally it’s a huge increase. It’s double the activity when we get to 5-and-a-quarter hours, but it’s climbing exponentially by then. And when all those “tails” stack up…

By increasing the declared duration, the recognition that the later activity is much stronger does seem to make the system more resistant to unexpected lows many hours after a post-meal BG peak.

But I’ve also had to account for the decrease in activity over the first two hours. This has taken the form of a slight reduction in the insulin sensitivity factor, so the system knows the peak of activity will be lower for the same amount of insulin. I’ve also changed the insulin-to-carb ratio by the same amount.

These changes have allowed my system to retain most of its response behaviour as the declared duration has increased.

Of course, this isn’t a concrete statement of fact. It is based on extrapolations from the mathematical models (used by thousands of people around the world) and is still an experiment in progress. But those extrapolations have closely matched my real-world experience, giving me confidence in the scaling factors I’ve been using.

Welcome to life with diabetes.
Every day is an n=1 experiment in one way or another!

Hopefully this exploration of the logic is useful to other experimenters. Do note that increasing the duration past 7 hours does require an increase to the default limit in the AndroidAPS source code.

Just for completeness, here are the three activity lines on one graph: 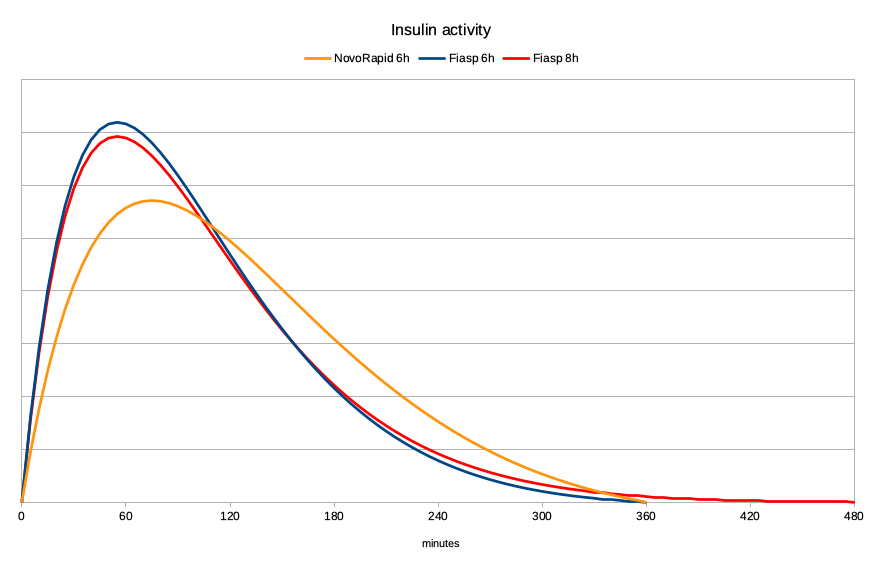 A corollary to this observation is that some people have observed that they’ve had to tweak their insulin sensitivity setting when moving from NovoRapid/Humalog to Fiasp. From the relative heights of those peaks that does make sense to me.

Lyumjev. The accelerated form of insulin lispro (or “fast Humalog”). I’ll keep mentioning it even though it is not yet available in Australia. But it is available in some other countries, and I’ve graphed here the model that people are having a lot of success with. 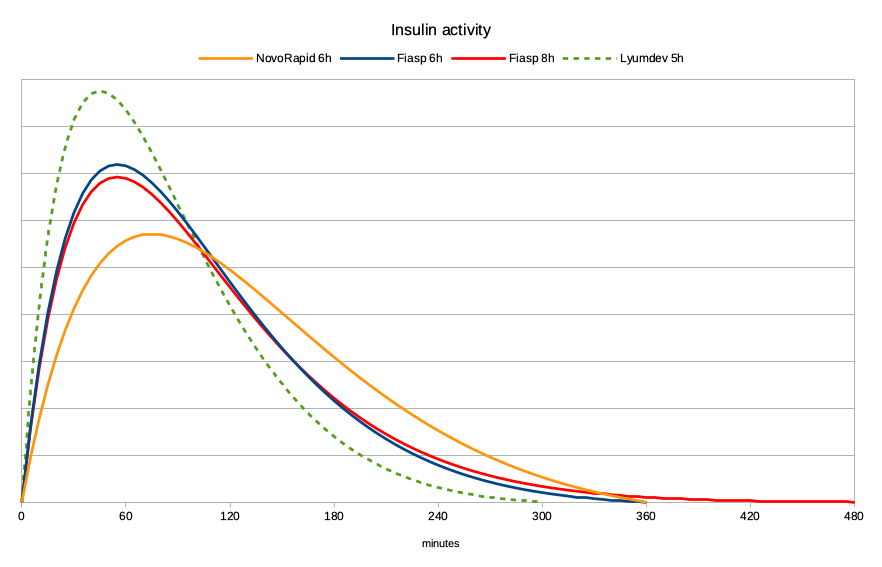 The peak is at 45 minutes, and the duration they’re using is only 5 hours. And as you can see, the resulting activity graph is impressive!

The faster drop in IOB also gives us more flexibility in things like dealing with exercise.

This is why we’re waiting for Lyumjev (and/or other faster insulins) with bated breath!
At least with Fiasp, #WeAreNotWaiting in the meantime and should be ready to take advantage of Lyumjev if and when we get access to it.

6 thoughts on “Subtleties of insulin duration”