People who know me wouldn’t be surprised to hear I’ve been experimenting with an insulin change recently.

I started out pumping using Humalog. In 2018 I spent a few months experimenting with Apidra in the hope I could get a faster result (and thus a more-responsive loop). And then when Fiasp finally arrived in Australia I got to sort out if that was going to work for me. In the end I decided that Fiasp was working well, and changed to it “full-time”.

I noticed significant changes in my CGM time-in-range and coefficient-of-variation (standard deviation) statistics right when I switched. I’ve written about this before. In this graph you can see the green line (TIR for 3.9-7.8 mmol/L) jump up just as the pink CV line dipped. The insulin type is shown along the bottom. The horizontal black bars indicate the 3-month HbA1c timeframes (and the periods over which the other stats were averaged). 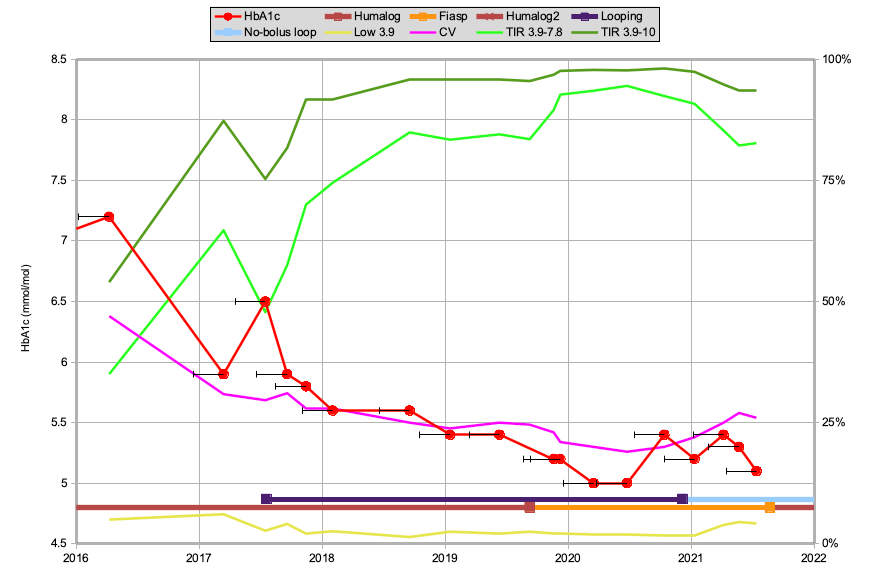 I’ve been sure Fiasp has been an important part of enabling me to do things like live the “no carb-announce, no bolus” life. All-up things have been going great. The metrics changed a bit in 2021, but COVID lockdowns (which are still going on) have a lot to answer for regarding exercise levels. But as you can see, the HbA1c has just been oscillating along in the low 5%s regardless.

Partly to make sure I’m doing things right. Partly out of curiosity to see what’s possible. And partly so I’m prepared when faster options finally arrive (such as Lyumjev which was recently approved in the US for use in pumps, although there’s no sign of any TGA approval yet).

In this spirit of adventure, I recently switched back to Humalog. I used Humalog for many years so it almost feels like an old friend, but I have been expecting to return to Fiasp when I’ve finished the experiment. How many weeks I spend on this remains to be seen. I wasn’t expecting to get the same “no carb-announce” results I’ve been getting with Fiasp, but hoping I could declare the carbs and still get the “no bolus” lifestyle.

I won’t be surprised if I end up with slightly different settings for Fiasp afterwards than I was using. I may learn some tricks along the way.

Humalog is a slower insulin, so I was definitely expecting to have to change my settings. Not only do I have to tell the loop system about the different activity profile (in terms of both the time to peak activity, and the overall duration) but it would probably need tweaks to my sensitivity and basal settings.

Well, yes and no. Have a look at this graph of insulin activities. It’s similar to graphs from my earlier article Subtleties of insulin duration. 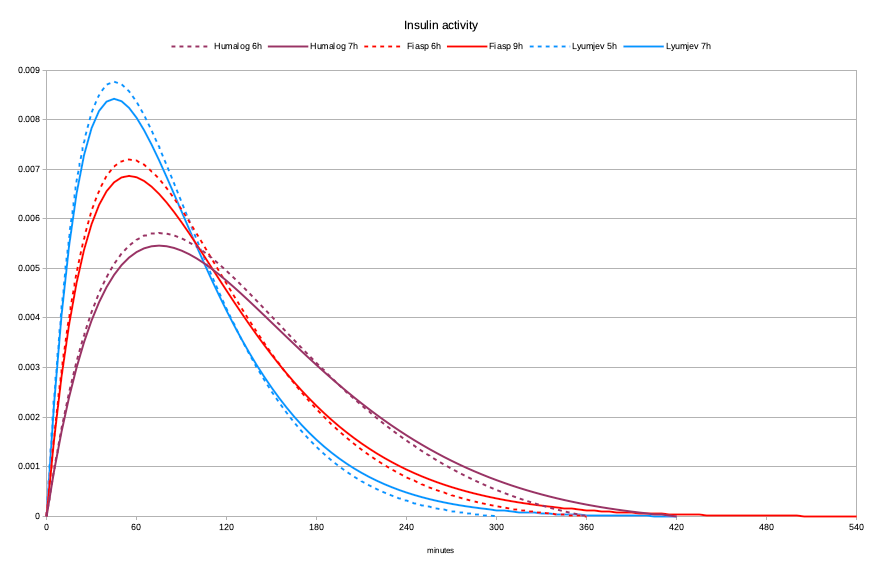 Not only do the different insulins hang around for different durations, but they also have different peaks of activity. Even if the areas under these graphs are all the same. I need to cater for these differences.

With Fiasp I have settled on using a declared duration of 9 hours. Before anyone has conniptions about that long time: look at the graph and see the difference between the red Fiasp dashed (6 hours) and solid (9 hours) lines. It’s mostly about accounting for the “long thin tail” of activity.

With Humalog I used to use 6 hours (the dashed maroon line), but with the benefit of hindsight I decided to start this experiment set to 7 hours (the solid maroon line). As you can see the model is predicting that there should be about double the amount of Humalog activity at 5 hours (300 minutes) than with Fiasp. 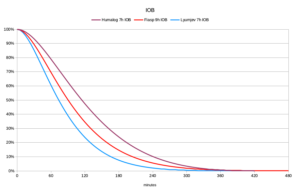 AndroidAPS will take that into account in managing my “Insulin On Board”. This graph is derived from the same maths behind the “activity” graph above (the activity can be seen a measure of the “slope” of the IOB graph).

The Insulin Sensitivity Factor is a measure of how much a dose of insulin will push our glucose level down. In Australia we’re used to indicating this as the ratio of 1 U : X.X mmol/L. The larger the X.X, the more sensitive we are and the less insulin we need to get the same effect.

You might think that for a given person this number would be unchanged for all U100 insulins, and in fact the prescribing information for them does indicate they’re the same. But not in my experience. We’re dealing with slightly more complex dosing algorithms that are trying to manage the insulin over its entire active lifetime. And we’re trying to do it as accurately as possible to enable optimal control. So I’ve found it’s useful to deviate from the traditional thinking slightly. 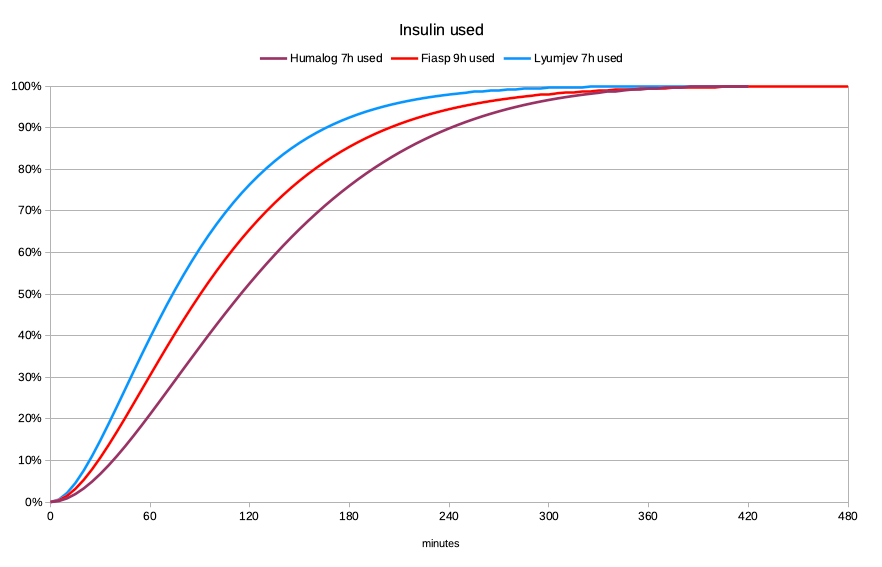 Even after 1.5 hours, less of the Humalog will have had effect on my BG than the Fiasp. And thus I’ve found it helps the loop to tell it the “sensitivity” is different based on that initial timeframe. This made a difference during my Fiasp tuning for optimal duration length. Yes more of the Humalog will thus be working after that point, but the model AndroidAPS is using (and I’m displaying in these graphs) will account for that over time.

At this scale it may seem that they’re both the same after 6 hours (360 minutes) and thus you might wonder why do we bother with times past that. While the differences past that time are dealing with very small amounts, with the AndroidAPS modelling which is adding up all the insulin doses (both basal and boluses) these small amounts can add up to significant (hypo-inducing) quantities. However in this particular exercise I’m interested in the much larger-scale differences earlier on, and the following graph is useful. We can compare the “used” amounts over time: 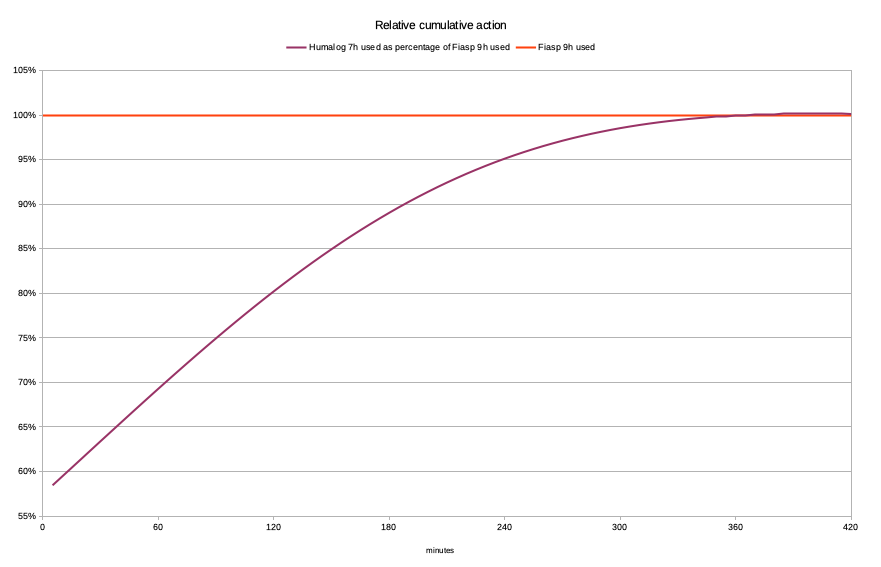 At 2 hours there’s about a 20% difference between them, but I couldn’t make adjustments that fine. With Fiasp I was using 1 U : 2.7 mmol/L. I went for 2.3 as a first guess for Humalog.

What about the Insulin-to-Carb ratio? In the same way I changed the ISF I might need to change the IC, but possibly not by as much. By 3 hours Humalog would have had 89% of the effect of Fiasp. So as a stab in the dark I reduced the IC number by 11% to see how it would go.

Basal insulin is being dosed as a “continual” thing in the background. The quotes there are because in my insulin pump it’s actually being delivered in 3-minute increments, but it averages out. Different pump models generally deliver doses every 3, 4, or 5 minutes.

In fact that averaging-out is key: the basal trickle during the day should even out over time, and even though the activity profile is different I would not expect to have to significantly change the basal rates. Where my profile varies during the day to match my body’s needs, the change in speed may mean I need to move those variations around a bit, but probably not by much. 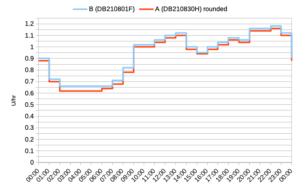 Here’s a graph from the spreadsheet that tracks/compares my basal profiles. There was a slightly bigger drop overnight, but overall it’s not a huge change.

How it’s gone so far

My initial guess of a 17% change to the insulin sensitivity (needing a higher dose for the same adjustment) seems to have resulted in a good outcome. The ISF isn’t too “strong” (too low a number: otherwise I would start to see a “wave” in my BG graphs, along with waves of insulin administration with a 2-hour wavelength as the system doses then backs off, then doses again according to the ISF).

Back in 2019 when changing from Humalog to Fiasp I found I needed to increase my rates/ratios across the board by around 4%, but as I hadn’t been paying so much attention to the activity profile (and tuning the duration setting) I wasn’t confident this time that 4% would still hold.

Initially I made no change to the basal rates, but within a day noticed that when I was fasting (e.g. overnight) my BG was hovering just below my target level, and the loop system was running with a consistently negative IOB.

If the IOB was zero that would indicate I had been getting exactly the level defined in my default profile (even after counting all temp basals and boluses): consistently negative was a good sign that the basal rate was too high. In the end I found I needed to reduce the rates by almost 3%. The data and graph shown above is for the final profile.

But overall my insulin usage has dropped a lot more than 3%!

Of course no group of days are exactly the same. Different food, different exercise, etc. But overall I’m not aware of significant differences other than I maybe started out eating more cautiously with Humalog.

The reduction in TDD is notable in the records (and noticeable that my reservoirs last a little bit longer) but I’m not sure it has much direct clinical impact.

IOB drops slower before exercise with Humalog, and this extra IOB seems to have a notable effect on my bike riding, such as the 17km commute to work (with my “essential worker” status).

It’s been more frequent that my BG will start to drop significantly during the ride (understandable as I hadn’t managed to reduce the IOB as much beforehand). And those instances the lows seem much more extended: again attributable to IOB.

So I’ve had to declare my “exercise temporary target” earlier, and things are much better. But this experiment did introduce some extra lows into the results shown below.

As for the effects on my blood glucose, let’s look at some statistics:

The average BG for Fiasp was above my longer-term average (see the earlier graph of HbA1c) but it was just a random fortnight.

The Humalog stats for time below 3.9 aren’t impressive, but as mentioned that’s partly been affected by some early post-exercise lows. Also due to sometimes floating along at 3.8. But the 3.5% for Fiasp was also directly attributable to some exercise experiments.

But none of these differences are particularly statistically significant yet. In fact the significance is probably that things have not changed dramatically.

Now for the AGP graphs. First Fiasp, then Humalog:

Some of the overnight Humalog lows were resolved by tuning the basal rates.

The outcomes (so far)

Not that I could achieve similar BG results (I used Humalog for years so am quite familiar with it).
What is surprising is that I’ve still been lazy (ok, that bit’s not surprising) and failing to declare most of the carbs I eat!

I’m planning to move back to Fiasp soon. Mainly because the faster IOB decay simplifies BG management during exercise.

But while I’m doing these checks, I may as well be thorough. NovoRapid’s next on the list! It will be interesting to see which of the changes are shared between both forms of insulin aspart (Fiasp, NovoRapid) as compared to insulin lispro (Humalog).

2 thoughts on “Using a different insulin”