Back in February I wrote about some of my experiences with “Living with an actual closed loop“. Time has ticked by, it’s now been 4 months since my last bolus, and I’ve just come back from a meeting with my endocrinologist. 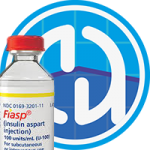 To re-cap: I have my AndroidAPS setup tuned fairly well (and using Fiasp in my pump) and am not bolusing for food or BG corrections, letting the loop handle it by itself. I’m not even declaring the carbs I’ve eaten. My main interactions with the system are to tell it about exercise activities.

So this week was a bit of milestone. I stopped bolusing back in early December, and had bloods last taken in January. This April set of bloodwork (including HbA1c) was my first that covered a whole 3 months with no bolus.

I have not issued a manual insulin bolus since early December.

I have not counted or declared any carbs to the system since January.

It is now April.

So how has it turned out?

My endo seems very happy with the results. Fascinated in fact. I had told them back in January what I was doing, and I think they knew I’d keep myself safe.

I commented in February that my TIR (Time in Range) numbers and SD/CV had loosened up a bit, and that still holds over the longer term. In the last month my data has not been the best due to a combination of factors:

Even though I know some of the data is wrong, overall my CGM data for the last quarter seems not too bad. And that wonky data will age out of the system.

To put this in graphical context, here’s an update of a graph from my January article about “Finding insights from CGM data“: 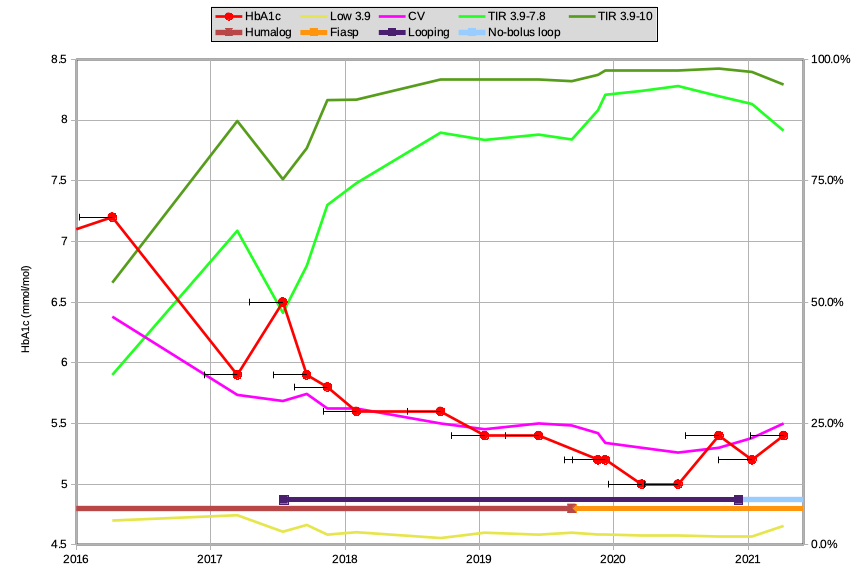 That shows some basic stats over a timeline back to when I was doing “manual pumping” and started using CGM systems. It’s the data on the right that’s new.

As you can see I might say the stats have “worsened” a bit, but we need to put things in context!

My TIR stats (for both ranges) are still similar to when I was last using Humalog in 2019, and explicitly counting carbs and bolusing. The other stats are mostly OK (the increased time below 3.9 is vaguely disappointing, but not terrible and probably biased by factors I’ve already mentioned).

I’m still very happy with the results I’m getting. Especially given the amount of work I (don’t) have to put in every day!

How much work do I have to do?

Obviously I keep my pump running, replacing the insulin and the pump sites on a regular basis.

I occasionally calibrate my CGM when the conditions are right (when the BG is stable, at multiple levels over time). With the G6 that’s changed to “I occasionally check the CGM”.

My CGM is visible on my watch any time I want to check it. It also displays how much IOB (Insulin On Board) I have. 1.4U in this image. At a glance I can see the graph , the current BG number, the change since the last reading, etc.

This is a Garmin watch and when it’s tracking an exercise activity it displays this data in a Data Field (and recording it as part of the FIT file). Most of the day I’m not watching this. But the point is I can easily check any time I want.

Here’s last Sunday’s data. You can see the insulin has been administered via a series of basal adjustments, combined with lots of little microboluses. I have not manually initiated any of those things.

The “low” after 8am was immediately after I got out of bed. I usually find my BG drops slightly in the morning between the bedroom and the kitchen, so this didn’t worry me. Actually the “Offline” event was because I disconnected to have a shower. You can see the breakfast rise happening soon after.

If I’m going to be exercising I do try to set an “Activity” temp target (a higher BG target than my regular 5.0) early enough so that any IOB will subside before the exercise and I’m less likely to drop towards hypo. It it helps to be able to see that IOB figure.

But things doesn’t always go precisely to plan. For example yesterday I was riding my bike on a 25km trip (to my endo appointment). Unfortunately I hadn’t set the Activity target early enough for the IOB to drop enough, so I had a muesli bar on my way out the door. My BG was 7.3 when I started out.

About 2/3rds along the trip I noticed I was 5.5 mmol/L and dropping fast. I popped a few glucose tabs and kept riding. I didn’t change anything in the system: it had already stopped the insulin flow. My BG later dipped below 4, and I popped a few more. I did make it in time for my appointment, with the dip arrested.

I might have over-done it a bit as during my appointment my BG started rocketing up. I say “rocketing”, but because the system immediately responded with insulin it crested at 7.8 before dropping again. So I guess my glucose treat wasn’t too much. After the appointment I ate another muesli bar before getting back on the bike, and I reached home at 5.3.

Tuning and managing exercise is one of the trickier areas, but I find if I plan the timing of my food and exercise it generally works out well. Admittedly 50km of riding in a day is unusual for me. On many days my BG just gradually moves up and down and stays within 3.9-7.8 mmol/L with just the occasional trip above that if I had a carb-laden snack.

I occasionally review the loop system’s overall performance and make tweaks (for example last weekend I adjusted all my default profile settings by 5% and it’s smoothed things out again). But most of the time I’m not watching it closely.

Many people assume I’m on a low-carb diet to achieve this. While I do tend to choose lower-carb and lower-GI options where I can, I estimate my daily carb intake to be well over 200g. And sometimes a lot more.

On the whole I try to choose foods which are less likely to “spike” my BG, but I will still have things like chocolate, icecream, and bowls of soba noodles (not all at the same time).

This is definitely just an “N=1” experiment: just me and not a randomised cohort of users. But I can say that for me this system is working well.

With no carb-counting.
And with minimal mental load.

“Mental burden” is a real thing with diabetes, and I feel mine is quite low. I try to make sensible meal choices (even if sometimes that pushes me well over my average carb intake) but I don’t have to pay close attention to the food details and carb counts. I eat, and I live. And the loop keeps everything running.

It’s not perfect of course. My main goal at this point is to get that “time below 3.9 mmol/L” metric improved again. I had been trying to get it down closer to 1%, and think it should be possible again (minimising the wonky CGM data and the tuning I’ve done for big meal responses should both help). Pretty much everything is at a level I’m happy with. Especially given the lack of need to apply constant “brain space” to counting carbs.

I’ll see what the data looks like later in the year! It’s already looking better when I analyse just the last fortnight.

It’s taken me a lot of tuning to get the system set “just so”, and some of that may be enabled by my particular physiological needs. There don’t seem to be many of us in Australia managing this yet. But I am working with some friend who are trying to reproduce similar results, so maybe there’ll be more soon.

Meanwhile components of the system keep being improved.

For example I’ve been relying on Dexcom G5 CGM for a long time, and I’m currently experimenting with G6 for long-term use. So far the difference in calibration needs is noticeable, and this can be a further improvement in the “mental burden” aspect of life with diabetes.

The AndroidAPS software keeps improving too, and the hardware I’m running it on gets smaller and more convenient at the same time.

I’m still using Fiasp, which is the fastest-acting insulin we have available in Australia at the moment. I’ve been using it for 18 months so far (as can be seen on the graph above) and I’m confident it’s making the difference in letting the system respond to BG changes fast enough now that I’ve got the loop system tuned.

I am hoping for faster insulins in the future. I don’t know when it might happen, and Fiasp is working well for me in the meantime, but the sooner we have more options the better.

Apart from anything else that should increase my flexibility with food and/or help optimise the clinical results further. And the extra flexibility should make it easier for more people to achieve this!

8 thoughts on “No-bolus for 4 months”