In exciting news, Project Anubis has been announced. It is a modification to the Dexcom G6 “Firefly” CGM transmitter that gives a bunch of things that I personally see as advantages over new units.

The rest of it essentially is a G6 (although obviously not supported by Dexcom). That support only applied to the original unit before recycling. For that matter, they’re no longer “Medical Devices”: just pieces of electronics we choose to use…

Just like a standard G6 the unit does not require fingerprick calibration (although this can be used). The units work just like other G6s, using the same sensors and communicating with phone apps, pumps, standalone receivers, etc.

As can be seen in this prototype image, an Anubis unit is marked (by laser engraving) to avoid confusion with a regular G6. The serial number is currently displayed on the top of the unit for convenience.

That is a security concern to me: a nefarious bystander who finds out your serial number could conduct a denial-of-service attack (just as with G5/etc) and disconnect your CGM from your phone/pump. But it’s easy to cover up with Sugru/enamel/etc to remove that risk.

By default an Anubis unit will run a G6 sensor for 10 days with a 2-hour warmup, just like a standard Firefly. But for “advanced users” wanting more (and willing to take the extra steps of monitoring sensor performance) this can be tweaked via Bluetooth to provide sensor sessions up to 60 days (or whenever you give up on the sensor) with a warmup of just under an hour. Note that the Dexcom G6+ used in South Africa already has 14-day sessions and 1-hour warmup.

Project Anubis is the culmination of over 6 months effort by a team of engineers and testers (centred here in Australia). It is not a commercial product: it is made by people with T1 diabetes for people with diabetes. 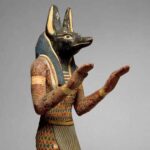 Anubis is the ancient Egyptian god of mummification and the afterlife, protector of the dead, as well as the patron god of lost souls and the helpless. He’s often depicted weighing the heart of the deceased against The Feather of Truth.

It seems a vaguely appropriate name.

Where to from here?

Each Anubis transmitter is produced from an expired/recycled Dexcom G6 Firefly. It gets physically modified and updated. It’s currently a small operation, and production at the moment is limited by the availability of expired transmitters. Pricing is unclear yet as it’s a fair bit of work, but should be no more than 50% the cost of a new Firefly. The expectation is not to make money out of this: everyone’s in it just to help other people with diabetes get access to featureful CGM.

Of course I plan to be reporting soon on my own Anubis experiences as part of the testing cohort.

Do you have expired G6 transmitters?

Making these units depends on the availability of expired Firefly G6s to recycle. If you have any, please don’t throw them out! I’m told people donating old transmitters should be prioritised as the production of Anubis units ramps up.

Collection points for expired Fireflies are currently established in five countries. Links (via Facebook) to these people are as follows:

Here’s a bit of a run-down of the history:

The original G6 transmitters had serial numbers that began with 80, and were basically a 2nd-generation G5. They didn’t need calibration and had 10-day sensor sessions, but otherwise they had the features of the G5. Including the ability to be reset via Bluetooth after replacing the battery. These have been quite sought-after in some circles because of their ability to be re-batteried.

Then a firmware change (apparently somewhere in the 81Cxxx range of serials) removed the ability to reset. This meant that after the first 100 days Native mode wasn’t available, and these transmitters were only useable with xDrip+, Spike, and xDrip4iOS (not with the Dexcom apps, Tandem pumps, etc). They can be re-batteried, but are then restricted in what they will work with.

Then came the “Firefly”. The serial numbers jumped up to 8Hxxxx or so, and the shape of the top of the units changed subtly. Internally the hardware underwent a major overhaul. The algorithm got some reworking too, especially the auto-calibration algorithm and sensor restart detection. Because Firefly removed the transmission of “raw” sensor data (which had been there since the G4) these transmitters would not work with Spike and xDrip4iOS, and as such could not be usefully re-batteried.

There have been continual Firefly firmware updates since, although the impact of each is much more subtle. When the G6 was introduced to Australia, we were well into the Firefly generation already.

South Africa seems to be the only place which receives the G6+ version, which otherwise seems to be similar to the Firefly.

There are signs of Dexcom’s next-generation G7 system emerging onto some international markets soon. Here in Australia the G6 was only introduced in 2020, but has not yet replaced the G5 for most people. I have no idea of when Dexcom might eventually bring the G7 to Australia. On a related note, it’s taken Abbott almost three years to bring the Libre 2 to Australia.

I think there’s plenty of life left in the G6 system all around the world.