My closed-loop insulin pump system is based around AndroidAPS, which runs on an Android phone and connects to both my CGM and my insulin pump via Bluetooth. Since 2009 my “phone phone” has been an iPhone, and I carry a separate device just for the diabetes management. I often refer to it as “my pancreas” (although that could also apply to the insulin pump, and to my actual pancreas although it no longer produces insulin). 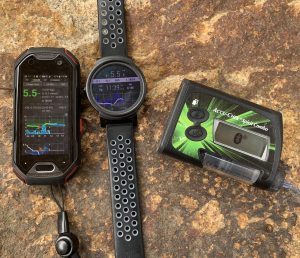 Back in 2019 I showed the tiny Unihertz Atom phone I was using to run my loop. It’s really about the same size as the pump, and is rugged (rated as IP68 waterproof). It’s waterproof even though the headphone port and USB-C socket don’t have rubber covers.

This phone has been a bit temperamental at times, with slightly weak Bluetooth signals, and needing careful configuration to avoid Bluetooth dropouts. It started off running Android 8.1, but now runs Android 9.0. The battery has had more than enough charge even for very long days continually tweaking the pump (I plug it in to recharge overnight).

The thumbprint sensor on the front has made unlocking the screen very convenient, but the 2.45″ screen really is tiny, and typing anything on the tiny on-screen keyboard can be a challenge.

Occasionally (every few days) it benefitted from a reboot in order to clear the Bluetooth connections and stop repeated “disconnected”/”reconnected” messages from my watch, CGM, and pump. 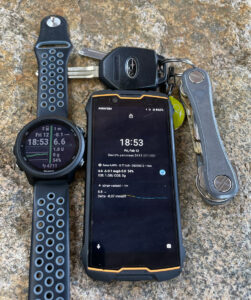 I recently picked up a new “pancreas” phone. The KingKong Mini 2 from Cubot (another Chinese brand). The “KKM2″ is about half the current price of the Atom.

The phone has a 4” screen, which is much closer to a standard phone screen size and seems like a reasonable compromise between ability to see and type things, and not being too large for pockets. It’s about half the thickness of the Atom, which helps offset the impact of the larger screen. They’re a similar weight.

The KKM2 runs Android 10.0, and has a 3000 mAh battery. The earlier KingKong Mini (“non-2”) has exactly the same specifications except for Android 9.0 and a 2000 mAh battery. For about the same price, so if you’re shopping for one of these phones be careful which one you’re getting. So far the battery has had enough power for 20+ hours between recharges, although I’m still changing some settings to optimise this. I’m quite comfortable relying on it to to run my loop all day. A rubber door on the base exposes the USB-C port for recharging. Unlike some rugged phones I’ve used, it can take a standard length USB-C plug.

The KKM2 doesn’t have a finger/thumbprint sensor, which is disappointing after the Atom. It does have a Face Unlock function, but I’m not comfortable with the security of this (especially when it doesn’t care if I’m wearing a facemask or not!). The standard options of PIN/Password/Pattern are there too of course.

The 4G radio in this phone doesn’t support all the frequency bands used in Australian 4G networks, so in some locations we might have weak or slower signals. But many people use AndroidAPS with no SIM in the phone at all as it can just upload data to Nightscout every now and then. And we don’t really need super-fast connections.
Mind you I have been using Telstra and Amaysim (Optus) SIMs in the KKM2 in Melbourne for about a month and have noticed no coverage issues.

Bluetooth performance has been excellent! I’ve been getting Dexcom capture rates of 96-99%, with most of the gaps because of things like me sitting or lying on the phone and obscuring the signal. The connection to my insulin pump and Garmin watch has been very reliable too, with none of the occasional hiccups found with the Atom. The driver that connects to my insulin pump records the reported Bluetooth signal strength, and on average I’d say it’s about 20 dB stronger than with the Atom.

The battery apparently has 50% more capacity than the Atom, but overall the battery life seems about the same. It doesn’t have trouble coping with a full (20+–hour) day. Mind you, things like the delay before screen timeout can make a big difference to that.

Rugged, but not IP68

The phone has rubberised corners which provide a lot of grip and drop-protection. I don’t think it needs a case or extra screen protector. But although Cubot describe it as “waterproof for common liquids” and “dust resistant”, they haven’t actually certified it with a rating.

And I can see why. When unscrewing and removing the plate on the back (that covers the slots for two nano SIM cards and one microSD) we can see it doesn’t have a gasket or seal against water, and would just rely on the fact that it’s screwed down tightly.

Unlike the Atom the KKM2 has a rubber door over the USB-C port, and if that was left open it would lose some water-protection. Luckily the port doesn’t need a special super-long connector like a few earlier rugged phones.

I would expect this phone to survive having a drink spilt on it, but unlike the Atom I would be surprised (pleasantly!) if it survived being taken for a swim. But for about half the price of an Atom I suppose some compromise had to be made. Many Android phones aren’t as rugged as this.

Nope. But it’s been very reliable. And it’s cheap. For a total of AU$141 it arrived from Singapore in under a fortnight.
I’m very happy with mine.

I bought mine via AliExpress, and it took a couple of weeks to arrive at my door. The only variable you have to choose when purchasing this model is whether you want the red or the yellow rubber stripes on the front!

What about my Atom?

It’s still a nice little phone, and may find a place as my disaster-recovery backup looping phone for when I’m travelling. But overall at the moment I think the KKM2 is nicer to use.

When I’m days away from civilisation (or just from “first-world” technology) I have to carry backups for everything. The tiny size of the Atom is a bonus, along with using the same charge cables. It’s reliable enough for me to be happy to use it, but only if the KKM2 was unavailable. Or maybe if I *knew* I was going to get soaked repeatedly. Mind you, it’s not clear how long it will be before it’s COVID-safe enough to consider travelling overseas again. Maybe the Atom’s Android 9.0 will just be “too old” by then! Probably not though. In the meantime it might end up living in my BOB.

3 thoughts on “A new “pancreas phone””