More news from the 2019 Australasian Diabetes Congress. For those people who can use luer-lock infusion sets with their pump, new options should be on the Australian NDSS list as of September 1st, 2019. I wrote about the luer-lock options recently in the context of “Animas finally going away“. But now there’re two more options!

As discussed in that article this is relevant to users of the:

But there’s also a bonus for DANA users.

The “new” infusion sets are the Orbit soft (teflon) and Orbit micro (steel), with luer-lock tubing.

The Orbit sets (made by Ypsomed) are already available with different tubing for the DANA pumps (where the Orbit soft is called Soft O Release) and for the Ypsopump. The Cellnovo pump also used these. I wrote an article about the Orbits back in January. Please read it for details. 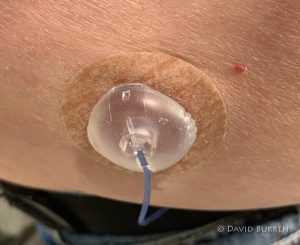 The Orbits are 90˚ (“straight-in”) and the tubing attaches in a way that can be rotated 360˚ without disconnecting (the original name of the Orbit was the “Orbit 360”).

The luer-lock versions of these have been available overseas for years, but they’ve finally made it onto the NDSS lists for us to access here in Australia. They’ll be available in two options:

This is a lot finer (and even more flexible) than the other steel cannulae on the market such as the Sure-T/TruSteel/Contact Detach, although the Orbit “dome” does result in a higher profile than the Sure-T/etc.

Available in 6 and 9mm lengths. I have used the 6mm.

These will be available with tubing lengths of 60, and 75 cm. I gather there will also be a 105cm option.

Both the soft and micro versions are inserted the same way, and from the outside look the same. The only difference is the cannula under the skin (and the colour of the internal port which seals it off when the tubing is disconnected).

Cannula-only, with a DANA bonus 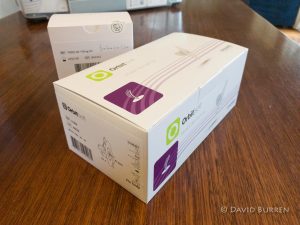 Just like some of the Accu-Chek cannulae, the Orbit soft and micro will be available in cannula-only form (these are usually slightly cheaper than sets that include tubing).

This can be convenient if you use multiple cannulae for each tubing set, but it also means that users of DANA pumps will be able to use the Orbit micro cannulae with the tubing from their Soft O Release sets. So far equivalent steel sets have not been available from SOOIL. 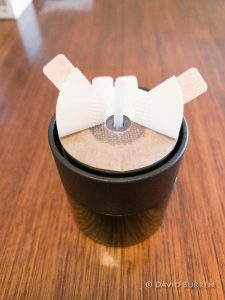 Both sets can be inserted by hand, but the little black inserter provided by Ypsomed is an excellent device. I’ve never felt the steel sets being inserted, just a dull thud as the site touches the skin!

The large purple DANA inserter can also be used, but I much prefer the Ypsomed “MyLife” inserter. Past Cellnovo users may already have the Ypsomed inserter (with Cellnovo branding on it).

Quite apart from providing more options for Animas/Accu-Chek/Tandem/DANA users, these Orbit sets will also allow some people to try them out before transitioning to the Ypsopump (for which these are currently the only option).

Do note that in the same NDSS September update that introduces the Orbit luer-lock sets, we’re expecting the Tandem luer-lock cartridges to be removed. Unfortunately it seems not every supplier believes in supporting user choice.