The autocorrect functions in modern phones can certainly speed up a lot of things, but occasionally they get in the way.

In online diabetes forums it’s unfortunately become common to see people talking about “nasal rates” and giving themselves “blouses”. That’s usually autocorrect replacing words it doesn’t recognise. But it’s usually easy to work around. I’ll demonstrate how to do that on an iPhone or iPad.

The first thing to know is that you can’t change the autocorrect dictionary in iOS. If there’s a word it keeps suggesting, you can’t just go in and remove it from the dictionary. If you notice the incorrect suggestion and don’t accept it, eventually it will learn about this “new” word you keep typing. But there are two issues there: it takes a long time, and overriding a suggestion is different from going back and changing the words after it’s done the autocorrect.

However, there is hope. And not just by turning auto-correct off globally. You can define some words as Text Replacement shortcuts, and they should appear in the list of suggestions as you type. To do this, go to the Settings app and then into General, then Keyboard, then Text Replacement. 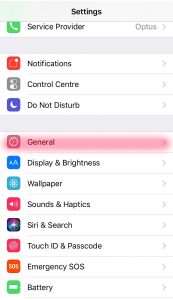 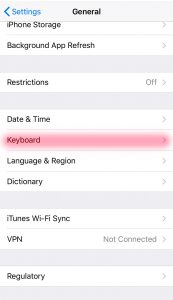 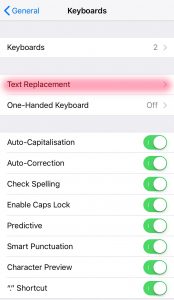 There may be a default shortcut where “omw” gets replaced by “On my way!”, and this illustrates Apple’s intent in including this feature. A way of defining psuedo-words that get expanded into phrases and thus saves you typing effort. But we can also use it to override the dictionary. 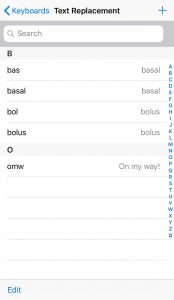 In this screen you can see I’ve defined “bas” and “basal” as expanding to “basal”, with equivalent shortcuts for “bolus”.
Thus when I start typing the word “bas” it will suggest “basal” as a replacement. And if I type “basal” in full, it won’t be tempted to outsmart me by replacing it with something such as “nasal”.

To add a new shortcut, use the + in the upper right. To delete one, use the Edit button at the bottom. To change one, just click on it.

When typing, if the word you want appears above the keyboard, just tap on it to insert that word (with a trailing space and thus ready for your next word). 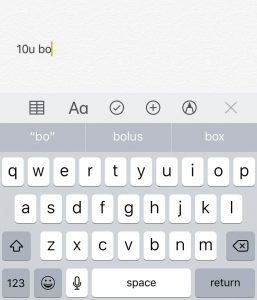 If a suggestion comes up in colour (usually blue) then just pressing Space will insert it. In this example it’s recognising the shortcut “bol” which I defined above: 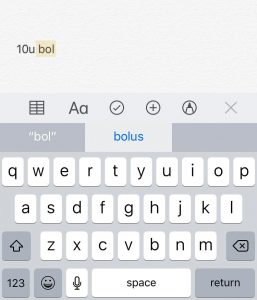 That’s it! See if that fixes some of your autocorrect hassles. And while you’re at it, see if there are any other words you need to teach your phone about. You might want to try defining the plural “boluses” as well.