It can be tricky to gauge how many people are managing their diabetes using DIY closed-loop pump systems, as there’s no mandatory reporting. The tools are out there, and people are free to start looping by themselves. We recently saw the results of a UK-based survey, which at the beginning of September showed at least 82 “loopers” in the UK. Setting up such a poll was fairly simple, so we did a similar thing for the Australian community. I’ve shamelessly copied the pie-chart reporting style too! We ran the poll for just over a week, and these results are as of the 1st of October. As expected, the mixture of loop systems and pumps being used is quite different to the UK.

Results are still trickling in, so it’s likely that there are more loopers out there who have not yet participated, so this only tells us that there are at least 65 active loopers in Australia at the start of October 2018.

As expected, there were three DIY loop systems in use: 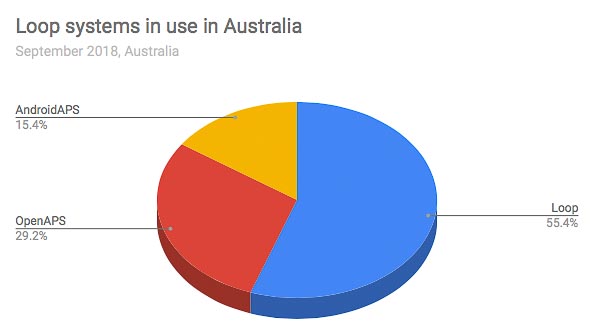 All of those loopers except for one person are operating their loops in “closed” mode, where the computer continually makes adjustments and the user gets to “look over its shoulder” when they want. The “open” mode which is being used by one Loop user makes regular suggestions which the user needs to approve/enact. This is usually a familiarisation phase that people move through fairly quickly, so it was interesting to see that there was even one person still using that mode.

Which pumps are being used in these loops? 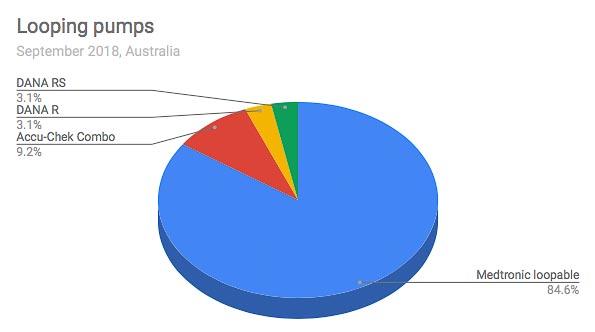 Pumps not being “looped”

Of the 40 prospective loopers, they got to say what they were currently using: 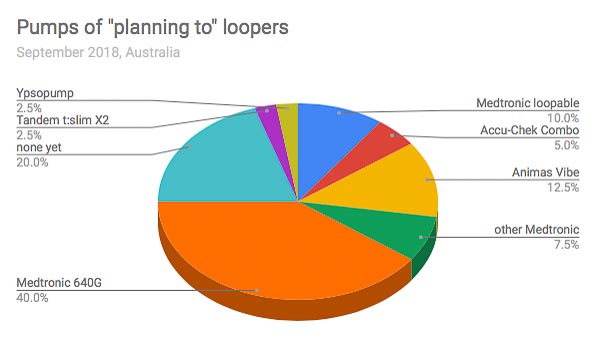 Some of these people (15%) have loopable pumps already. The remaining people are obviously considering new pump options!

Of the loopers, the distribution of CGM devices was: 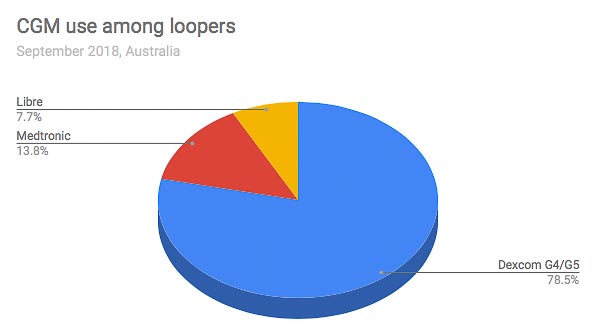 We did not ask people to distinguish between Dexcom G4 and G5, although most of them will be using G5. While G4 can be used for a loop, it’s straightforward to change over to G5 which is then a more compact and easily integrated system.

Note that while Libre itself is not sold as a CGM per se, by using third-party devices that regularly scan the sensor and report data to the loop, these have been used to make CGMs that can work with all these loop systems.

The only correlation in this data was that the Medtronic CGMs were being used with the Medtronic pumps (with Loop and OpenAPS). Dexcom and Libre are used with everything.

Overall (including those planning to loop) the distribution of CGMs was: 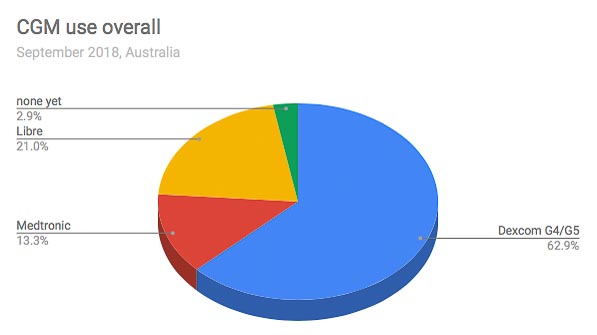 What does all this tell us?

For a long time the only pumps people could use for DIY looping were the old Medtronic models, and these obviously still dominate the population. We also had several loopers who have been using DANA R pumps with AndroidAPS for some time.

In the last year two new looping options have appeared: the Accu-Chek Combo (through an update to the AndroidAPS software) and the DANA RS (as a new pump also supported by AndroidAPS). The Combo pumps have been used in Australia for a while, so there are existing users taking advantage of the new support, and people like myself who have bought new Combo pumps expressly because they can be used in a loop. I know the DANA RS pumps that showed up in this survey were bought from outside Australia, but it looks like there will be a few more in the next iteration of this survey (as the DANA RS was added to the Australian Prostheses List last month).

We do hope to run a similar survey within the next six months. Hopefully we’ll manage to capture a larger percentage of the looping population (which will of itself be larger).
I’m expecting most of these numbers to grow – it will be interesting to see which grow faster!