Recently it was time to change my pump reservoir, and I realised I’d set a new personal record.

The insulin had been in my Accu-Chek Combo pump for 8.5 days!

The reservoir in my pump can hold 3.15 ml of insulin. Currently I usually fill it with between 300-305U of Humalog from a pen cartridge. 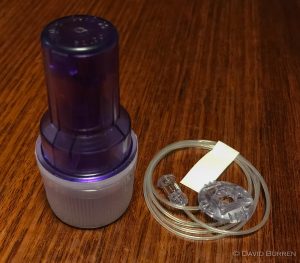 I’ve been using Cleo 90 infusion sets, which conveniently come with the tubing sealed up in a sterile package separately from the purple inserter that contains the cannula. This makes it very convenient to just put on a new piece of tubing with each new reservoir, and then just replace the cannula every 3 days.

So reservoir and cannula changes usually haven’t been happening at the same time. The cannula gets changed at around the 72-hour (3 day) mark, and the reservoir gets changed some time after the “low” alarm goes off.

In this case I’d changed the cannula 3 times while using the same reservoir!

The official label for Humalog insulin in Australia says that if used in a pump it should be replaced every 48 hours. But no-one does that any more. Some people change the reservoir at the same time as their cannula, and many people use it for a bit longer.

In the US the FDA label for Humalog says it should be replaced in the pump after 7 days.

So yes it’s “off-label” use, but it’s been working well for me. And very convenient.

Did the insulin go “off?

No. AndroidAPS monitors my reaction to the insulin, and detected no significant change in insulin sensitivity during this time. After I replaced the reservoir with fresh insulin no change in sensitivity was noted.

As I wrote in an earlier “Have I cooked my insulin” article, the insulin in my pump is definitely at over 30˚C for a lot of time (it’s up against my skin in my pocket, and pump operations are done by remote control without getting the pump out). I have had a MedAngel One temperature logger up against the pump during this time, and it provides a good indication of the temperature of the insulin. Here’s the trace for the period this reservoir was in use:

What does this mean?

I’m just sharing an observation of what happened. I’m not saying that everyone should do the same thing. My own insulin consumption has dropped over the last few years, and it’s resulted in a longer reservoir life. Some people might use a whole reservoir in less than 3 days.

In my case the reduction in consumption seems to be related to several factors:

So this is just me reporting an observation of what’s been happening with my own pump.