What is your goal for managing your BG levels? Many people think of the range 3.9-10 mmol/L as their “goal” for their blood glucose. It’s a commonly-referenced range. Of course, that’s being quite specific in terms of a goal.

For most of us a better high-level goal is probably something like “live a full and happy life”.

But in terms of glucose management most of us like to have a numeric range to deal with. So let’s stick to that in this discussion.

The goal range is like the “dart board” we want to hit.
The target is the point on the board we’re aiming at.

This makes a lot of sense: don’t just aim at the board vaguely: aim at a specific point (preferably not at the edge) and you increase the likelihood of hitting the board.
Mind you experienced dart players will know that the bullseye in the centre is not actually the highest-scoring target, that’s a slight tangent.

Because CGMs measure our BG every few minutes the data can give us a lot of insight into our patterns, and it’s common to summarise the amount of time we spend “hitting the dart board” as a percentage. This is our “Time in Range” (TIR) and this is becoming widely accepted as one of the useful summary measurements of your glucose behaviour.

What goals to use for your own management?

3.9-10 mmol/L (70-180 mg/dL) is a standard reference point. It’s the default range used in clinical trials and in discussions with doctors.

If you see someone quoting a TIR value and they don’t specify the relevant range, it will be against 3.9-10 mmol/L.

But pregnant women with T1D are usually advised to aim at a tighter goal, in the interests of optimising the development of the baby. The guidelines say things like “your healthcare team will advise you on your target range” but often the goal range ends up as 3.9-7.8 mmol/L (70-140 mg/dL).

People who have managed to maintain tight control of their levels often end up choosing something tighter than 3.9-10. But if you feel you don’t have control, such tight ranges can seem “too agressive”.

My own goal history with looping

When I started using OpenAPS in 2017 I started out with 3.9-10 as my goal. The target I told my loop to aim at was 5.5 mmol/L. Of course it usually only achieved that overnight when I wasn’t putting more food into my system! Overall my average BG is higher than that, but 5.5 is what I was aiming for.

Not every day is the same, but a year before looping I was only managing 53% TIR (averaged over a 3-month period).

Before I go on I should point out that I don’t watch my statistics like a hawk throughout the day. That would be obsessive. But I do review my statistics every now and then.

The software I use can give me a pie chart where green is in-range, red is below-range, and yellow is above-range. Looking back on the last few weeks can give useful feedback as to how I’m doing. I’m likely to remember what happened in that timeframe, whether it was an exercise event or a birthday party with yummy cake. Or mushroom risotto.

As soon as my “rollercoasters” minimised, it became easier to keep my levels in-range. Occasionally I would go for a whole day with 100% in-range.

And eventually (after many months) I started to get days in a row where they were all-green! And then there would be something like a pizza experiment to “ruin” the statistics, but the green days would return soon after.

At that point I decided to move the “top” goal-post, changing my goal range to 3.9-9.0. Immediately my TIR dropped, and the pie charts had a lot less green (more yellow).

Note that I didn’t set alarms at 9.0, as that would just be too annoying for everyone around me. But I did change the graphs on my CGM so the line/dots changed colour at that point. I kept a safety alarm in place somewhere above 12.

Unfortunately some CGM software is not as flexible in how you set alarms. I usually use xDrip+, which lets me set multiple alarms at different levels independently of the graph colouring.

Psychological impact of moving the goals

The day-to-day impact on me was noticeable. There was no extra bleeping from my CGM, but whenever I looked at the live graph on my watch or phone I got visual feedback.

The previous day my BG might have been cresting at 9.2 after a meal, and I would have looked at it and felt it was fine (knowing it was soon to descend back towards my target). But now as soon as it passed 9.0 the graph changed colour, and I was reminded I was higher than I wanted to be.

Never mind that yesterday that level was fine: today it needed attention! Even more so if it was 9.8!

And how did I change my levels for the next day? There are of course many factors, but they include:

My HbA1c had meantime dropped to 5.6% (equating to an average of 6.3 mmol/L).
By leaving my lower “goal post” at 3.9 (and not having more hypos) but dropping the top “goal post” (and maintaining enough time in range) of course the average BG will fall.

So of course eventually I moved the top goal post again. This time down to 8.0.

My TIR (3.9-8.0) was obviously suddenly lower than for 3.9-9.0, and the statistics I occasionally reviewed gradually drove me to tweak my configuration further. Eventually I decided to move the goal posts yet again!

Theoretically I could keep going lower/tighter, but I have settled on the range I often hear referenced for pregnant women: 3.9-7.8. I’m not planning on becoming pregnant, but it’s long-term health that I’m after.

Note that I also changed my “target” (where my loop is aiming). My target is currently 5.0 during the day and 5.2 overnight (simply to give me more buffer room against hypos and possible CGM calibration errors while asleep). 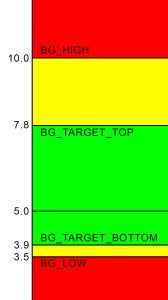 I actually work with 4 goal posts (a concept that might be familiar to followers of Australian Rules football). There’s my tight (3.9-7.8) “range I’d like to stay within”, and there’s also the wider (3.5-10) “range I really don’t want to exceed”.

Shown in the diagram, there are convenient “BG_” variables you can define in Nightscout to colour your graphs in the same way I’ve used here. Of course you should use numbers that suit your own goals. Remember, in Nightscout configuration is done in mg/dL so multiply your numbers by 18.

Of course sometimes my BG does go above 7.8. Especially a post-meal peak. Sometimes it does go above 10. But I try to not stay up there for long.

When I started looping I had an alarm set at 3.9 as I was trying to never go below that, but today I just have a warning alert at 3.9, and an alarm at 3.5.

These hypo levels are derived from the work in papers such as this 2018 one, which describe how in clinical trials 3.9 or below (“Level 1”) should be treated as an “alert”, while below 3.0 is “clinicially important hypoglycaemia”.

“How did I get to this point?”

Before I started looping, if someone had told me I was going to end up with a 3.9-7.8 goal range and a 5.0 target I would have scoffed. That was too hard, and even too “aggressive”!
None of us want to end up having hypoglycaemic events, and back then if my level was 4.1 that felt uncomfortably low.

But by aiming at a goal that was achievable, and then gradually moving the goal posts I have ended up with a target and goal range that I feel is both safe and achievable.

Also, before I started looping if my BG was 8 or 9 that seemed “normal” and “OK”. But now it feels “high”. It all depends on what you’re used to.

For a while now my TIR (3.9-7.8) has stayed in the mid-70%s, although with some recent changes I’ve made (including introducing Fiasp) it is now in the mid-80%s and may even climb into the 90%s. We’ll have to see how the average pans out over time.

I’m quite happy with this range at the moment, and don’t feel a need to tighten or lower things further. My average BG has dropped to 6.0 mmol/L, which is apparently in the “gluconormal” category.

Where to for you?

Whatever end-goal you have in mind, I highly recommend the path I took of setting manageable goals and then tweaking them slowly after I met them. If I had set tight goals too early, I would probably have been discouraged because I wasn’t meeting them. And it takes time to get there!

The positive reinforcement of noticing improvement against my current goals cannot be underestimated. And I certainly wouldn’t want to be discouraged by something like “alarm fatigue”.

Of course not everyone is going to want to end up where I have, but I hope explaining my path helps someone, and I wish everyone good luck in managing their own diabetes!

1 thought on “Targets and Goals”