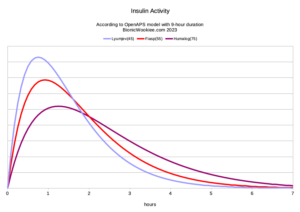 We usually think about this in terms of the simple concept of a single bolus: how quickly it starts acting, and how long for. I discussed this in detail last month: Insulin timings (2022).

However things do get a tiny bit more complicated when we consider basal insulin. In discussing this with some groups recently I realised that it wasn’t necessarily obvious to someone who hadn’t looked at the maths in detail. Thus this article.

Basal insulin in a pump

Pumps contain only one insulin for both boluses and for basal (background) insulin. Conceptually it infuses that basal insulin at a constant hourly rate that we’ve set in the basal profile (and/or the AID system has instructed it).

Actually the pump delivers it as a series of “basal injections”. Pumps like the Medtronic Paradigm series did that every 5 minutes (at which point it would inject 1/12th of the hourly dose). Other pumps do this on 3 and 4-minute cycles, and the Omnipod pumps deliver whenever it needs another 0.05U “click” (the smallest increment it can deliver).

The slight differences there don’t factor into this article, but the concept can help understanding. When the pump delivers a new basal dose, the timing of its effects are expected to be as per the modelling I’ve outlined earlier. But it’s layered on top of all the previous doses. Over time these all add up.

And as you might expect, the result does vary depending on the insulin type. For simplicity I’m modelling here the actions of:

As before, they’re being modelled with 9-hour durations. For more discussion of that, I refer you to December’s article.

So what happens over time as the insulin activity builds up? First of all, this graph starts off from having no insulin on board (which would rarely happen). But it still tells us a lot. 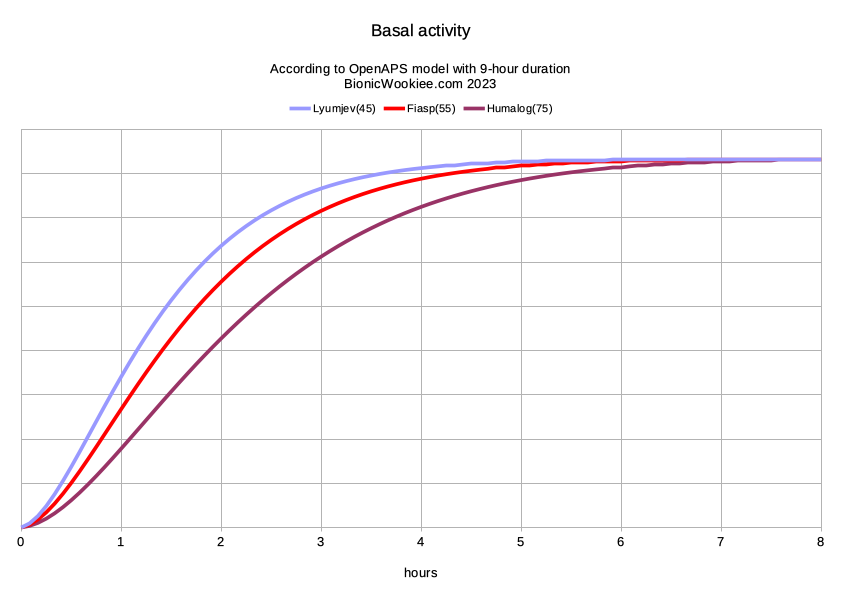 It should be fairly obvious that the faster insulins have impact faster. So changes in basal rate will be noticed more quickly. Sometimes we make a change to the basal rate for a particular time of night to counteract a pattern we see in overnight BG levels. With the slower insulins we can benefit from making the basal change earlier.

But looking at the right side of the graph, we can see that it all evens out in the end. And thus we generally don’t have to change the basal rates when we move to a different insulin, as all the hours blend together. The differences in action will be around those times that the basal rate changes, but overall the same amount of insulin will have the same effect. A unit is a unit, after all.

So that was the activity level: how much the insulin will be acting at any one point.
Now what about the IOB: how much insulin is floating around in our system to be used?

You’ll recall the IOB graphs for a single dose: 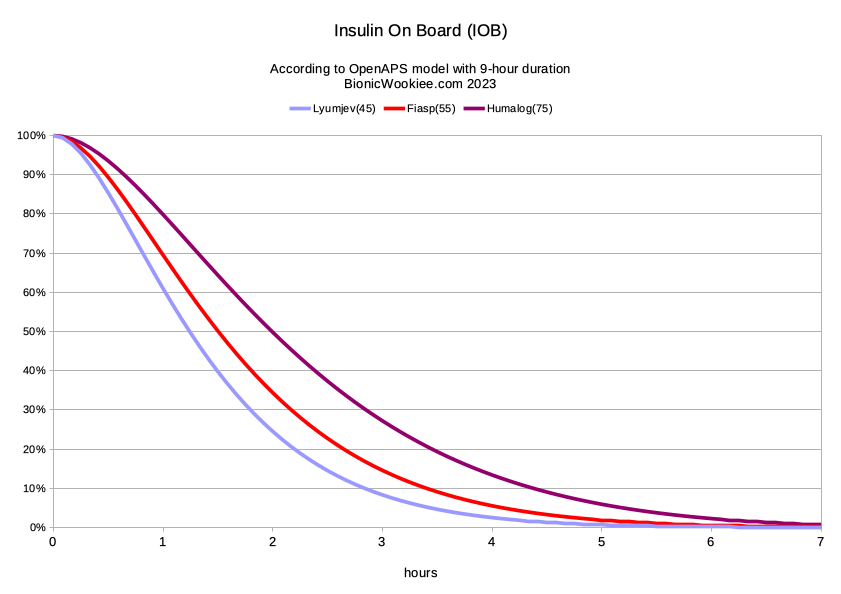 The slower insulins hang around for a bit longer (a higher Activity level matches a faster drop). But what happens when each tiny basal dose is layered on the previous? 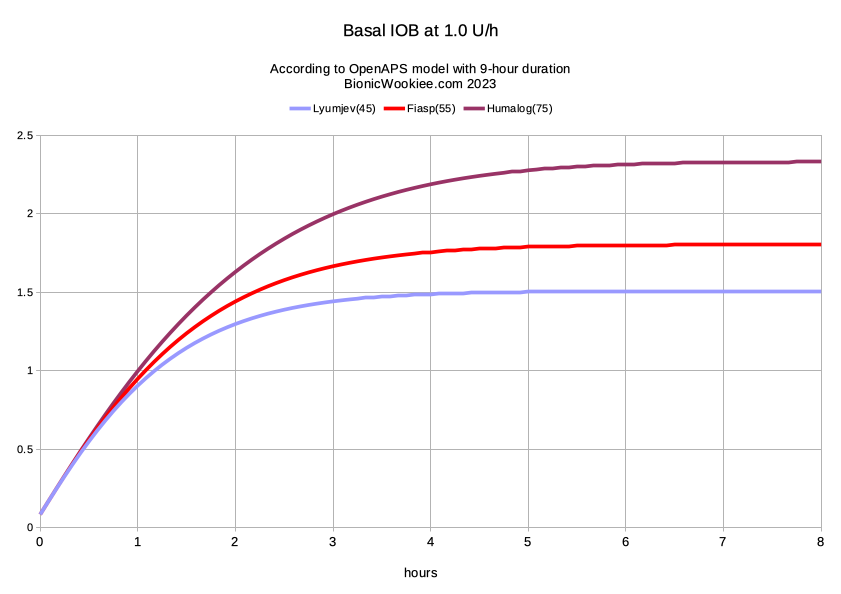 For me the major take-away from this graph is that with slower insulins there’s more insulin floating around waiting to have effect. Just because we’re infusing 1.0 U/h does not mean that there’s a background level of 1.0 U!

Looking at where these lines end up at the right side of the graph:

These should scale up linearly as the basal rate increases from 1.0 U/h.

Clinically it’s unclear what the impact may be on our bodies, but that is a 1.55x difference between Humalog and Lyumjev. Particularly for people using large amounts of insulin, I do wonder if it has any impact on the issue of hyperinsulinaemia.

The differences in cumulative IOB are not precisely the same as the differences in peak time (the base variable behind the exponential equations) but they are roughly similar if that provides a convenient rule of thumb (e.g. 75 minutes vs 55 minutes).

The basal rates may be the same for different insulins, but I have found for faster insulins I need to increase both the Insulin Sensitivity Factor (“correction factor”) and the Insulin:Carb ratio. This seems to be because more of a dose will be used within the first hours and as a result the insulin “feels stronger”. I’ve mentioned previously that I use the differences in the amount of “insulin used” (the inverse of IOB) at the 2-hour mark to scale the factors, and this has worked very well for me.

All of these things should be obvious, but hopefully the graphs and numbers I’ve presented here help with comprehension.