A theme I hear repeated many times in D-communities is that of finding used BG test strips in all sorts of random places. In the car, in the bed, in the bottom of a handbag, in the freezer (??), and so on. This post is just an outline of the method I use to avoid this. It doesn’t involve anything magical, just a bit of planning.

I used to exclusively use Accu-Chek Mobile meters, which have an integrated 50-test cartridge with no mess (other than disposing of the cartridge when it’s empty). But the BG meter I carry with me at the moment is an Accu-Chek Guide, a little device that transfers readings into my phone and keeps its clock synchronised through Bluetooth. It has canisters each with 50 strips, but I don’t end up with a mess. I’ll illustrate: 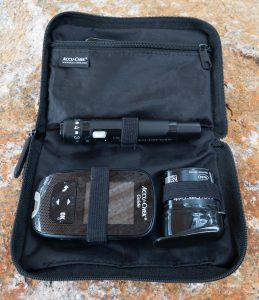 Here I’ve unzipped the case, and you can see the meter in the lower left. I’ve arranged it so I can insert a test strip into the “bottom” of it without having to remove it from the case. In the centre of the case is the FastClix lancing device, which holds a cartridge of six very fine lancets. I must admit I don’t change lancet on every use, but it is very easy to advance to a fresh lancet after a while, and easy to replace the cartridge when it’s all used. In the lower right is the canister holding 50 strips. Here it is with the lid opened. You’ll see the strips are held in a neat row, making it easy to pick off the next one. 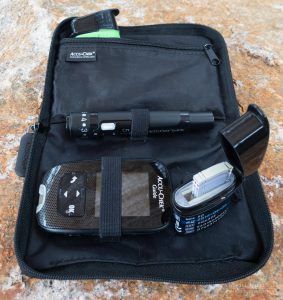 But if you look at the top of the above photo you’ll also see another container poking out of the pocket on the other half of the case. This is where I put the used strips (usually ejected directly from the meter into that container). It’s just a used canister, but with the internal frame removed: 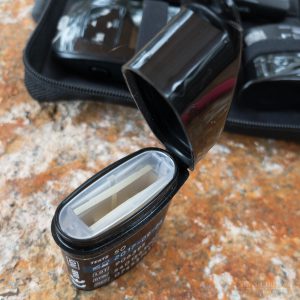 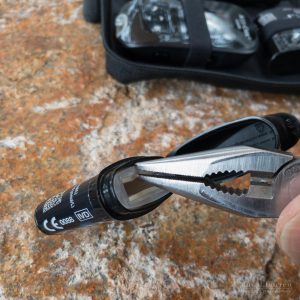 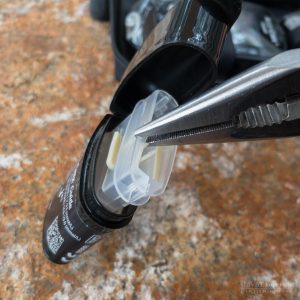 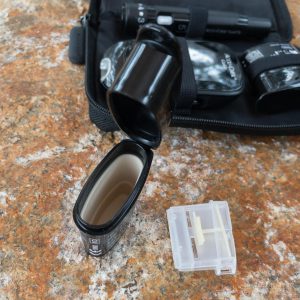 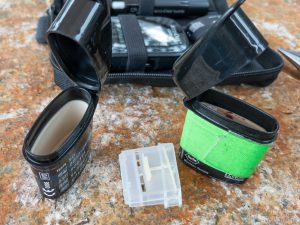 Every now and then I empty that “used” canister out, and eventually replace it altogether (it can get rather dirty inside over time). No more random strips hiding everywhere!

That’s all there is to it. You can use any sort of canister, but empty strip containers are usually an OK size. But I do make sure whatever I use is going to fit in my kit without adding too much bulk (otherwise it might get left behind). It doesn’t have to be big (it only needs to store a day or so’s worth of strips) but it has to be convenient.

Otherwise it’s a waste of effort!