Well a lot has been going on recently! 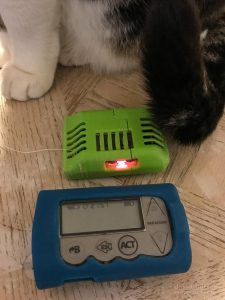 I have been running my insulin through a closed-loop pump system for several weeks now, and it’s running well. My system is using a Medtronic Veo pump, an OpenAPS Edison rig, and my existing JARVIS CGM. The OpenAPS software can be configured in many ways, but by default is fairly dependent on an Internet connection to reach a Nightscout database. My own system has been modified to be almost independent of Nightscout, and is able to run while completely disconnected from the Internet (which is a requirement given my trips to remote wilderness areas). Expect more posts about this in the future!

If you’re interested in moving your insulin pump to a closed-loop system and are prepared to do a bit of technical tinkering to achieve something that is not yet commercially available (a key issue in the #WeAreNotWaiting movement), the Facebook Looped group is a great resource. And if you’re in Australia there’s also a FB group populated with locals who are building or have built their own loops: Aussie, Aussie, Aussie, Loop, Loop, LOOP!

Incidentally, this blog has recently moved to a shorter URL but that change was hopefully seamless and subtle.
And in other news, there’s been a lot of news out in the world of insulin pumps.

Medtronic have issued a worldwide safety recall for older versions of all their pump infusion sets. This has been big news in the online D-world, as there are so many people using Medtronic pumps. However a detail that some people seemed to miss was that the recall notice did say that if you only had recalled sets to use, you could do so if you followed some “Key Steps”. Those steps are actually part of the default instructions that have been in the Medtronic pump manuals for years, but it seems that many people haven’t read the manual for their live-saving prosthetic pancreas!

Finding an insulin pump that can accept the required computer commands is the biggest challenge, and most people have had to dig up older unused pumps. There have been a few choices available:

Work continues around the world on interfacing to more pumps, and recently there have been some interesting relevant announcements.

At the EASD2017 conference in Lisbon last week, the Korean pump manufacturer SOOIL announced their new Dana RS pump, and made a big show of the fact that it has been developed in collaboration with open-source workers such as the primary developer of AndroidAPS.

Their previous Dana and Dana R pumps have been available in Australia but have a very small user base. They do have a few disadvantages such as a proprietary battery and a very limited choice of cannulas. Although they uses a Luer-lock connection to the infusion set, it’s reversed from the standard. I’m told the Australian distributor is hoping to have the Dana RS available here by the end of the year, but I assume they’ve got a lot of work to do. We watch with interest!

A new insulin pump is being introduced in Australia from October 1: the Cellnovo (which has been in Europe for a while). It’s an interesting little beast, with the pump stuck to your skin with a very short tube to a cannula. You get two pumps in the kit so you can recharge and refill one (they only take 150U of insulin each) while you’re using the other, and there’s a seperate controller device that is your interface to it.

It won’t appeal to everyone, but one interesting detail is that it seems the controller is an Android device, and talks to the pumps via Bluetooth. I’m sure the closed-loop crowd will be interested in that. In fact, the Diabeloop closed-loop pump system being developed in France seems to use Cellnovo pumps and Dexcom CGM, so someone‘s already using this connectivity!

The Cellnovo still has a very short tube, but the Omnipod is a completely tubeless pump system, where you fill a pump with insulin, attach it to your skin and then via the remote controller instruct it to insert the cannula. When it’s time for a refill you apply a new pump. This pump has been around for a while (but not in Australia) and many users love it. But the exciting recent news is that progress has been made on the radio interface to communicate with these pumps from closed-loop systems, and it seems likely it will be supported on some of them soon.

I think it’s unlikely we’ll ever see the Omnipod in Australia as the architecture doesn’t fit the “prosthetic pancreas” model that the Australian health insurance and NDSS system is built around. Most of the cost is in the consumables (a new pump each time!). But folks in the US and UK are understandably very excited by this new closed-loop news.

Phew! We do indeed live in interesting times…