Last weekend we had a first for Australia: a meetup of many DIY loopers for a “build party” where we shared with each other in person how we built our loops. “Loopers” are people with Type 1 diabetes who manage to connect their CGM (continuous glucose monitor) with their insulin pump (usually via a phone or other small computer) so the computer can help them with the minute-to-minute adjustments they otherwise have to make themselves. 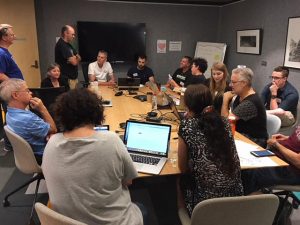 The event was held in Melbourne, and went from Saturday morning til Sunday lunchtime (with a break overnight of course). We had 34 people attend, including 12 current loopers. Over the weekend 5 people closed their loops they’d been building, and 7 others started to build their own loops. We also had partners and carers there, along with some DNEs along to learn beside their patients. 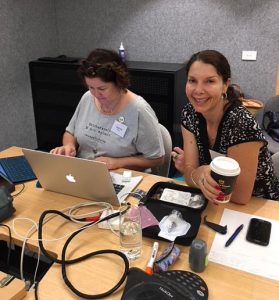 In all it was an amazing weekend! A wonderful example of peer support, with everyone helping and learning from each other. Upon arrival everyone signed a disclaimer (acknowledging they could not give anyone Medical Advice, and basically agreeing to behave themselves) and received their nametag.

This wasn’t a structured workshop with presentations, but rather a chance for everyone to meet and socialise, to show each other how their systems worked, and to learn from each other. We started out each today together in a central meeting room, and gradually spread out into groups working on individual projects. 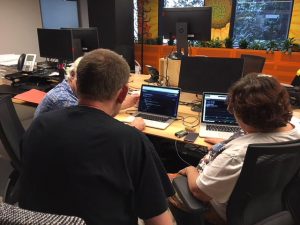 We had people using all of the three major DIY loop systems: OpenAPS, Loop, and AndroidAPS. One member set up a hardware workstation, and demonstrated replacing the batteries in various Dexcom and Medtronic CGM transmitters (the old Medtronic transmitters that work with the loopable pumps are getting rare, so it’s good to rejuvenate some of them). We had examples of almost every loopable pump on hand, examples of current and future OpenAPS hardware (including one of the prototype Explorer Pi HATs) and even prototypes of rechargeable CGM transmitters.

Most attendees were members of the Australian/NZ Facebook looping group so many of them knew each other already at least by name, even though this was the first time many of them had met each other in person. A few of the attendees came from interstate and overseas just to be in Melbourne for this event. There was lots of communal food on-hand, brought along by the participants. Including quite a few GF options for those of us with coeliac disease!

It looks like this was the first of many such events! We’ve had smaller meet-ups over lunch in the past, but nothing as intensive as this. Other smaller build events are planned for some other locations around Australia (again, organised by local loopers) and there will undoubtedly be get-togethers like this in Melbourne in the future. 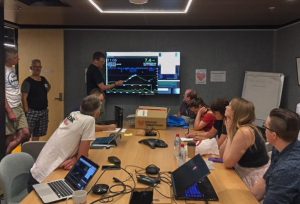 I’m very proud to have helped make this event happen!