The Abbott Libre “flash” glucose monitoring system has been available in Australia since June 2016. It currently costs almost $95 per fortnight, and just like the CGM systems there’s no funding subsidy available yet. But meanwhile, this week at the EASD meeting in Berlin, Abbott have announced their new “Libre 2” system. We have known for ages from Abbott’s involvement with Bigfoot Biomedical that something like this will be coming, but it’s good to finally see some detail.

The new system will use Bluetooth to communicate with the Reader device (and presumably their phone app). In doing so it introduces the alarms which have distinguished CGMs from the Libre. We don’t yet have full details, nor do we have a timeframe for when it might get introduced in Australia (although it has received CE approval for Europe already) but it will apparently be priced the same as the existing Libre system.

Unlike the “Libre 1” where the sensor quietly gathers data but only reports when the user actively scans it with a device, the Libre 2 sensor communicates every minute to the Reader 2 device via Bluetooth LE, which can then trigger alarms. The Reader 2 will still require you to scan the sensor to retrieve the full historical data. Quite apart from those new features (and adding alarms will be a big change to the functionality!) this opens up new options for the future.

However, there’s a lot we do not know about the Libre 2 yet. It is possible that the device transmits the current glucose data every minute (and if the device is used by Bigfoot’s systems that seems likely) and hopefully that’s the case. But it’s also conceivable that it only transmits alarm signals, which will be a lot more limited. Time will tell.

It seems reasonable to assume that the Libre 2 will form the CGM component of Bigfoot’s upcoming Automated Insulin Delivery systems.

It also seems reasonable to assume that the #WeAreNotWaiting community won’t wait too long to work out how to link the sensor via Bluetooth to CGM systems such as xDrip+ and Spike. This may cut into the market for third-party devices such as the MiaoMiao and the BluCon Nightrider (which are linked to these CGM systems via Bluetooth and scan the Libre 1 via NFC) but those have always seemed like stop-gap products solving a shortcoming of one particular product (the first-generation Libre).

The Libre has always worked by gathering glucose data from the interstitial fluid every minute. When you scan the sensor it downloads the per-minute raw data for the last 15 minutes or so, with averaged per-15-minute data for the last 8 hours. The Abbott algorithm uses the per-minute data to indicate a “trend arrow” and to attempt to extrapolate a value that will match the current blood glucose value. When you upload the historical data from the Reader into systems like Diasend or Tidepool you get 15-minute samples.

Most other CGM systems (e.g. those from Dexcom and Medtronic) sample the interstitial fluid every 5 minutes, and the CGM data we all analyse and review retrospectively works quite well with 5-minute and even 15-minute samples. But if we can get per-minute data from the Libre 2 that does open up more options! 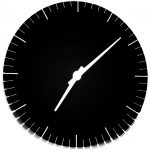 Consider our closed-loop pump systems. Every 5 minutes whenever new glucose data is available, the loop recalculates all its maths and decides whether to change anything about the insulin delivery. But the loops are not locked to 5 minutes: whenever new data appears they can react. Especially when combined with faster-acting insulins in the future, more-frequent CGM data should allow the loop systems to become even more responsive. There are other delays in our systems (such as any blood-to-interstitial glucose lag) but anything we can do reduce any of these delays has to be able to improve the system overall.

Some loop systems have been processor-bound, and take a minute or two to finish their calculations and pump communications, so may struggle to keep up with per-minute data. But this is changing. In the past I have configured a Libre-based loop system to sample data every 3 minutes, so I know it’s possible. I did find it increased overall battery consumption of the scanning device I was using at the time so I didn’t stick with it for long, but I know the current loop system I’m using should be able to take advantage of any speed-up.

I’m looking forward to finding out more about the Libre 2 as it becomes available!