I had an interesting experience today! As a follow-up review in my coeliac disease management I had to have another gastroscopy. And due to my age it was time for a colonoscopy as well. Fun and games – not!

This procedure involves sedation managed by an anaesthetist, so apart from the “ordinary” details of the procedure I had to think about how my insulin supply would be managed. It’s not quite general anaesthetic, but there’s no way I would be able to interact with the doctors. It doesn’t go on for hours, although I found out later that I was in theatre for over 40 minutes.

Preparing for the procedure with a day of fasting was made easier by my loop. Last time I had to do this I was using a “manual” pump, and there was a lot more balancing of apple juice and insulin to keep me vaguely on track that time. This time the loop just tweaked the insulin through the day so I stayed in the 5-7 mmol/l range (I told my system to target 5.5 mmol/l). I did have a few sips of clear apple juice to account for some of the dips from the exercise I got during the day (a mixture of walking, driving, and a lot of sitting quietly in front of a computer).

Once I started on the “preparation” drinks in the evening my levels did yo-yo a bit more, and a bit more juice helped stabilise things. But it’s easy to set yourself up for a rollercoaster with fast-acting carbohydrates, so some caution was required.

In retrospect I think my optimum basal profile for that day would have been different from my normal profile, but I don’t do this enough to test and repeat. With just a bit of guidance the system coped with the slight changes from normal.

I wasn’t allowed any liquids after 4:00 AM, so I had an alarm set for 3:30. To help with hydration I had a big drink of water then (and a little bit of apple juice just because I wanted to). I didn’t declare the juice carbs to my loop: it would just have to work that out on its own. 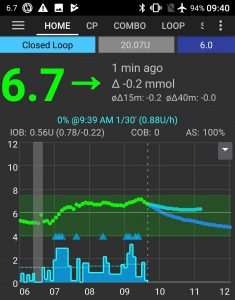 I’ll point out some details on that graph further on.

Everything went very smoothly, and I like to think some of that is due to the planning I’d done. Of course the medical staff had a lot to do with it too, but I was the one introducing an unusual component into their routine.

I had fitted a new CGM sensor not long before, and deliberately put it on the back of my right arm. I knew it was likely that I would be lying on my left during the procedure, and wanted to avoid the possibility of compression lows while I was under. My pump cannula was also on my right, which in the event of some unknown emergency would make it easily accessible in theatre.

Usually my insulin pump sits in a trouser pocket and the AndroidAPS phone on my belt, but that wasn’t going to work today. I wore the equivalent of a Spibelt: a soft belt with pockets, often used by runners. This one has two pockets: one for the phone and one for the Combo pump. 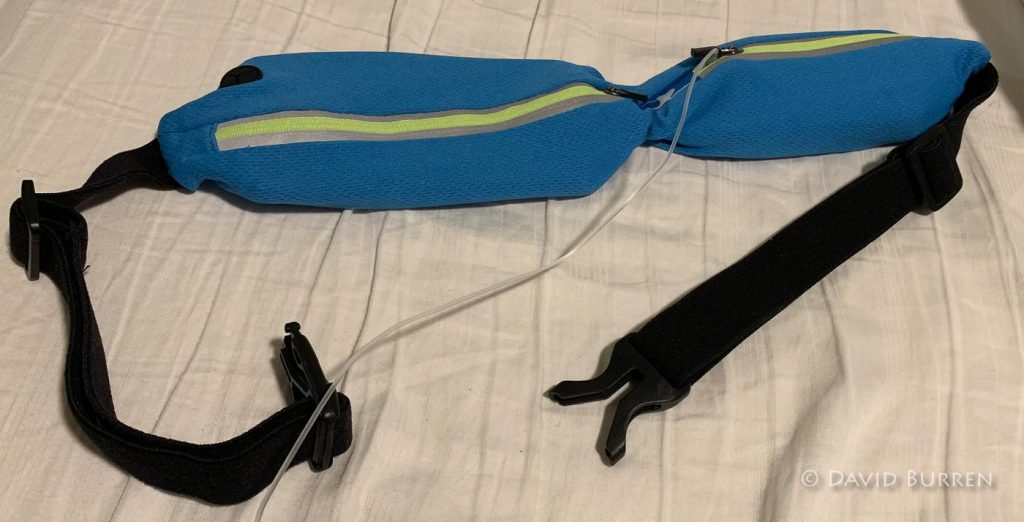 I had installed an infusion set with 110 cm tubing, which was going to give a lot of options for where the pump would sit during the procedure. As it happens 60 or 80 cm tubing would have been fine in this case, but I had a 110 cm set available so…
Initially most of the tubing was coiled up in the pocket when I went into theatre with the belt on under my gown.

I knew the hospital was going to want to put identifying stickers on everything, so I took both devices inside ziplock bags. I’ve had issues in the past with adhesive residue from hospital stickers and wanted to avoid that. 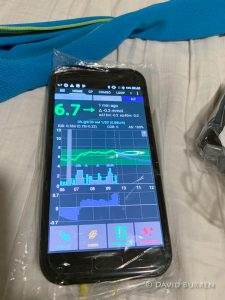 I wasn’t going to need to interact with the pump, and the touch screen (and even fingerprint sensor) of the phone worked fine through the plastic bag.

Just prior to the procedure I had the regular meeting with the anaesthetist where they check if they need to know anything special about you, and I essentially said that this belt (including the pump and the controller) needed to stay near me (and that I had long tubing: anywhere in the range of that tubing would be fine).

I did explain that it took the CGM data in real time and continually adjusted my insulin intake, and he was fascinated. I remember him mentioning to one of the nurses in theatre (as I was fading away) that the controller was “like a phone” but automatically controlled things. I didn’t confuse him by saying it was a phone (just in aeroplane mode with only Bluetooth enabled).

When I lay down we unclipped the belt, extended the tubing, and just laid it to one side out of the way.

That was it! AndroidAPS just plugged away maintaining my glucose levels while various drugs and hormones were running around my system. 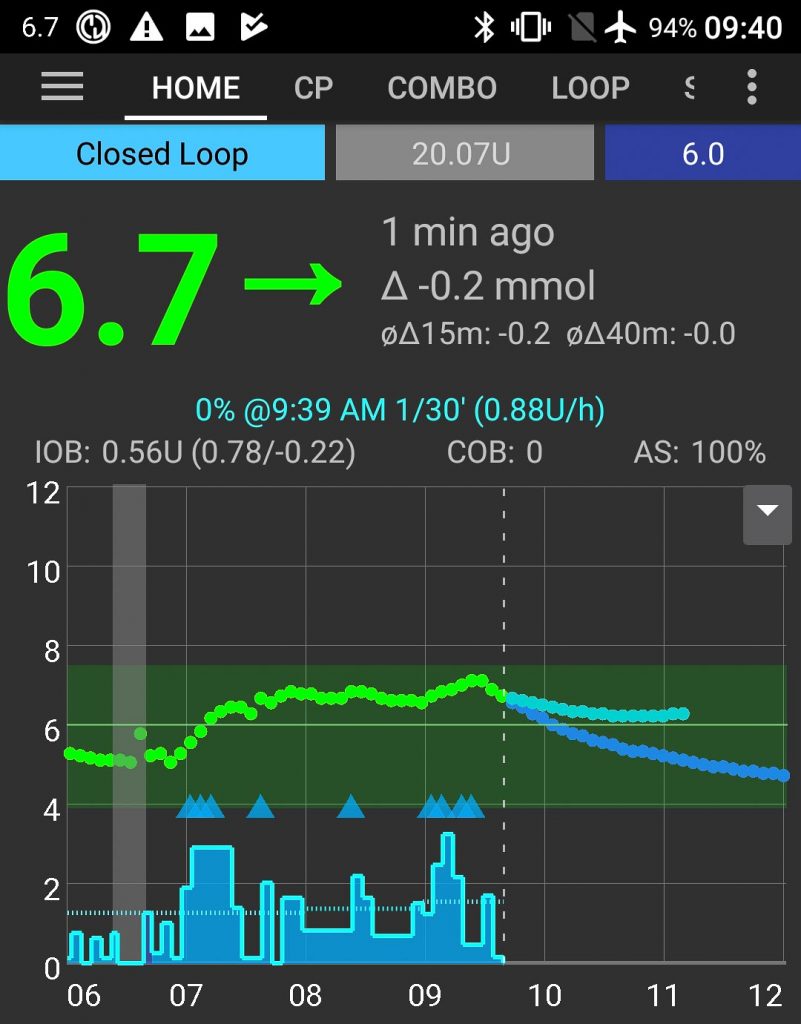 This history graph from AndroidAPS shows the result. The blue blocks at the bottom are the “basal” flow of insulin, while the little triangles just above are “microboluses” (sometimes just 0.1 U). The green band there covers 3.9-7.5 mmol/l which is my current target range.

That’s all she wrote!

That’s not all that exciting, and it’s not as involved as surgery with general anaesthesia, but hopefully it’s an example of how straightforward things can be. As expected it was a very positive experience dealing with all the medical staff involved!

The previous time I went through this I was using a regular pump and only reduced my basal rate knowing that I would run higher than normal (preferable for short periods than going low). Hopefully without it going “out of control”.
But this time I didn’t have to compromise.

2 thoughts on “In hospital with a closed-loop pump”