With the feedback loops in closed-loop insulin pump systems, reducing the latency of any part of the system can speed things up and make it more responsive. The relatively slow onset of current insulins (which I recently heard referred to as NovoSlug and HumaLag) is probably the biggest hurdle we have at the moment regarding the responsiveness of our loops. So any insulin that goes to work faster is very interesting to a looper.

In 2018 I was able to test Fiasp for a short while (thanks to some overseas travel) but I did not have a lot of success with it before I ran out of supply.

Now in 2019 I’ve been lucky enough to get access to some Fiasp ahead of the general PBS release on June 1st. In the end I only got access in late May but it continues to be an interesting experiment.

(“too long; didn’t read” for people not familiar with that abbreviation)

I’ve been concerned about Fiasp use in pumps for a long time based on user feedback and clinical trial results from overseas. I wrote about this when the PBS announcement was made. Most of the concern centres around the effects of long-term infusion of nicotinamide. Many pump users have reported that while it works great for a while, eventually Fiasp turns into “Fiasco”, with increases in insulin resistance to the point that insulin “seems as effective as water”. When they’ve returned to their original insulin, things have returned to normal. Mind you, not everyone has reported problems like this.

But given the opportunity, I was prepared to do some more testing.

In the lead up to this testing I’d been using Humalog insulin. My management routine had involved carb-counting, declaring carbs eaten (and bolusing for them) along with “future carb” declarations based on the protein component of my food. My results have been quite good, with sub-5.5% HbA1c, TIR (time in range) for 3.9-10 mmol/l of >95%, and almost no hypos.

I’ve been getting “good” results with Humalog, so why would I want to change?
If I can find a setup that reduces my workload even further I’ll be happy. If it comes with even-tighter time-in-range BG results that will be a bonus!

Many of my friends overseas using Fiasp have decided to not use “pure” Fiasp. By mixing Fiasp (which is essentially NovoRapid with added nicotinamide/B3) with insulins such as NovoRapid, they’ve reduced the B3 concentration. There has been some analysis suggesting that the B3 concentration in Fiasp is actually higher than required to achieve the fast absorption, and experience has borne this out for many people.

But other people have instead been mixing Fiasp with Humalog, and achieving the same fast absorption profile. I have some friends who have been using F50H successfully for several years. Fiasp mixed with “insulin lispro” (Humalog) is where the silly name “Fiaspro” comes from.

Of course, there are still some people who have found that even with the reduced B3 concentration, after a while (usually months) they run into the same problems of increased insulin resistance and local site irritations. I plan to see how long F33H works for me.

Mixing up Fiasp and Humalog is easy. With my pump’s 315U reservoir, I draw up 200U of Humalog and get rid of any bubbles. I then draw up 100U of Fiasp. Pushing the Fiasp into the reservoir starts the mixing action, rolling the filled reservoir continues it a bit, and diffusion should do the rest.

If drawing insulin from vials, it’s important to insert “100U” of air into the vial of the second insulin (Fiasp in my case) before inserting air into the first (Humalog) vial and beginning to draw up insulin. This is reminiscent of how I was taught to mix Actrapid and Monotard insulins in 1982 (“Cloudy, clear, clear, cloudy” for those who remember).

In case it’s not obvious:

Mixing Fiasp like this is quite “off-label”, and contrary to manufacturer instructions! 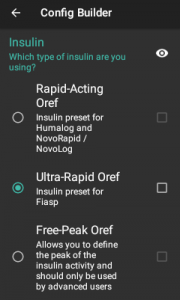 Essentially the main setting I had to change was to tell my closed-loop system that I was using ultra-fast (Fiasp) insulin instead of fast (NovoRapid/Humalog). It then uses a different insulin activity profile, with the peak of action at 55 minutes (rather than 75) and the same total duration of 6 hours. Keep in mind that while there’s a 20-minute advance in the peak of activity, the apparent onset happens well before that.

Note that unlike the simple bolus advisors in pumps (which use a simple linear decay model and usually regard 10% remaining insulin from a bolus as “effectively all gone’) the DIY loop systems try to track the entire tail of insulin activity. Because they calculate the activity of all the insulin in the system (varying basal insulin as well as boluses) they need to calculate the effect of all that “stacked” insulin. For more reading on this see Tim Street’s article on the duration of insulin action.

In a “manual pump” configuration I might want to decrease the pump’s idea of insulin action as more of the Fiasp gets used earlier, but with a looping setup the duration remains unchanged from 6 hours.

And so far the loop’s modelling of “Fiasp” behaviour seems to be a great match for my F33H!

When I started, my BG levels stayed around 5 mmol/l (my target) for long periods. It seemed great! But less than a week in, something changed and I started to have a lot of trouble keeping my BG levels below 9 mmol/l.

Using AndroidAPS’s Profile Switch feature I did a quick experiment and scaled up my basal profile (and insulin sensitivity/etc) by 20%. My levels soon came back into normal range, but were starting to oscillate towards the bottom of my range so within a day I backed the scaling off to 10%.

As I have been gathering more days of data I’ve been able to analyse it using autotune, which has recommended new settings that were very close to 10% above my originals. Using this I have made a new “Fiasp” profile which I’m now running at 100%.

In retrospect this was probably what happened to me in 2018 when I was using OpenAPS: after a while Fiasp changed my insulin sensitivity, and it seemed to not work properly. But I didn’t have enough Fiasp to continue testing (nor the convenient scaling feature available in AndroidAPS). As expected, when I returned to Humalog everything went back to normal very quickly.

This time when I started using Fiasp, it seemed like a straight swap from Humalog just with faster activity time. For a few days at least. The change in behaviour surprised me when it happened.

But is it better?

With Humalog I was declaring carb counts (and bolusing for them), with AndroidAPS balancing the carb absorption and fine-tuning things. For small carb doses (including “fake future carbs” to model protein intake) AndroidAPS was able to deal with those, but for larger (and higher-GI) foods a bolus was essential to help me keep within my target BG range.

My target range is currently 3.5-7.8 mmol/l (with warning alerts at 3.9) and I had been gradually increasing my TIR (time in range) to 85%. This has been with an average daily carb intake ranging from 200-300 g. So not especially “low-carb”.

That’s only two weeks of data, and not my “best” two weeks. But it’s the weeks just prior to my starting Fiasp use.

Now with Fiaspro I’m no longer using boluses. I am still announcing carbs, but letting the system deal with everything from there. The faster insulin response seems to be doing a decent job at responding to the changes.

That’s after only a week and a half so far. Early days, including some experiments, and of course I’ll continue to refine my settings over time.

These data sets are small enough that it’s hard to notice statistically-significant patterns. But at least things don’t seem to have deteriorated!

Once I’m confident of my settings I will probably trial a complete “UAM” (UnAnnounced Meals) mode again. I have used this in the past with Humalog and while the results were “OK” I was later able to flatten most of the post-meal highs by carb counting and bolusing. If I can get “Good” results without having to spend as much effort, that might be a solution I decide to use long-term. This isn’t hard to do with a low-carb diet, but I tend to have quite variable food intake so it may be a challenge.

Of course other people experimenting with Fiasp may have slightly different results, but in general the feedback I’ve heard hasn’t conflicted with my own observations.

So far for me although my insulin use has increased a little, the results are worth it already.
I’ll continue to monitor it over the coming months!

4 thoughts on “Using Fiasp in a DIY loop”