This week we have a few events happening in Sydney.

This year the Congress runs from the 21st to the 23rd of August. It is not open to the average punter living with diabetes, but is targeted at “health professionals”. It is the annual meeting of the ADS (Australian Diabetes Society: primarily endocrinologists) and the ADEA (Australian Diabetes Educators Association).

Luckily for you there will be a team of “consumers” including myself at the congress. Diabetes Australia has its Peoples Voice team attending. I will publish selected news here across the coming weeks, and if you’re on Twitter you can follow along by watching the #DAPeoplesVoice and #19ADC hashtags.

At the 2018 congress (in Adelaide) we saw quite a few things happen, including:

There were of course lots more things presented that year. This is just a small list. It will be interesting to see what comes out of this week, and I look forward to sharing some of them with you.

There are also a few other events happening this week in association with the Congress: 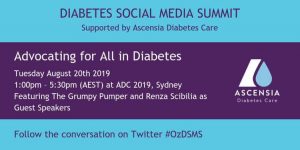 This afternoon (from 1pm Australian Eastern Time) there will be a summit run in Sydney just prior to the congress. Last year I was able to attend in person, but today I need to be physically elsewhere. I will however be participating remotely.

Items on the agenda include: diabetes tech decision making (including making things available for people without the online networks we sometimes take for granted), advocating for funding/subsidy, and discussion of diabetes “complications” (an issue which affects us all, even if we’re currently free of those health impacts).

Today there’s also an all-day event for DEs. You can follow along any reporting on Twitter at #RED2019.

3 thoughts on “A week of Australian diabetes news”