Last night I reached an artificial milestone. Not an important one, but maybe of interest to some people. 10 days ago I refilled my pump with Fiasp insulin, and ever since then it’s been close to my skin under my clothes.

As can be seen in my Nightscout site’s display, the Insulin Age is 9d24h (10 days), the CGM Sensor Age is 17d22h, and the Cannula Age is 10 hours. And the pump was reporting 10U remaining insulin.

As per medical recommendations, I do replace the cannula every 3 days of course (or 2 days when using steel cannulae). But the reservoir and the tubing to the site usually only get replaced when it’s empty (or close to it).

10 days is a new record for me. In recent weeks I’ve been getting longer and longer out of each reservoir, and reaching 10 days is a very arbitrary milestone. 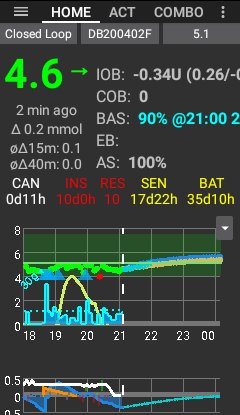 Incidentally, here’s the AndroidAPS display on my tiny Atom phone a little while later. It shows all those age counters in a concise display. I get to choose the “warning” (yellow) and “urgent” (red) levels in my config so I can ignore them when they’re plain white. Having the age of the cannula prominently displayed makes it easy to know when it’s time for a new cannula!

How did this happen?

I fill the pump with the contents of a 3ml pen cartridge, and this usually comes to at least 305U of insulin. The Combo pump’s reservoir can actually hold 315U, so it all fits.

I then use up 25U or so filling the tubing (I’m currently using 110cm tubing) and flushing all the bubbles out. After the first day more bubbles will have formed in the reservoir, so I use another 20U or so flushing those out.

So that leaves around 260U. My insulin sensitivity has gradually been increasing (and thus insulin consumption dropping), and lately I’ve only been using around 25U per day. Thus that 260U has lasted 10 days!

What does it mean?

Put simply: my Fiasp insulin has been working well in my pump for 10 days straight. Previous weeks have been over the 9-day mark, with no apparent change in sensitivity when replaced with a new reservoir (an indication that the insulin hadn’t “faded”).

The insulin had been out of the fridge for several days before it was put in the pump. I know from previous experiments that the insulin in the pump will have spent most time in a temperature range of approximately 25-35˚C.

I’ve heard some people claim that Fiasp will go “off” in the pump after 3 days, but that’s definitely not my experience. I’m sure replacing the cannula regularly is important though.

The underlying thing here is that my insulin consumption has been dropping. I think there are at least two factors in this.

A year ago my daily consumption was around 35U. Today it’s averaging closer to 25U.

Those figures are shown in the “Day to day” Nightscout report, although the “carbs” only includes those carbs I’ve declared. Any un-announced meals that AndroidAPS has recognised (and dealt with) are not included in that.

My closed-loop system does mean that I spend less insulin fighting highs (and food fighting lows) than I used to. Before I started looping my daily consumption was averaging around 45U. Soon after I started, my consumption settled at around the 35U mark. Usually any variation was mainly affected by my carbohydrate consumption.

But also I’ve been managing to lose some more weight lately. As the weight drops off, every month or two I end up having to change my settings because my insulin sensitivity has increased! It seems I’ll be at my goal weight soon so things may stabilise.

Late last year I experimented with reducing my carb intake to below 90g/day, but that didn’t help me weight. Currently I’m close to 120g/day (approximately 1.25 g per kg of body weight). Less than I’ve consumed at some stages in the past. Of course, that is an average: there are still occasional days full of carbs! So I don’t think that I’m eating “low carb”.

The “social isolation” of the COVID-19 pandemic doesn’t seem to have had a big effect on this. I do know some people whose insulin consumption has increased lately (possibly due to a trifecta of reduced exercise, increased snacking, and stress). But I’m actually used to working from home much of the time, so the disruption to my lifestyle is probably less than for some other people.

I’m not trying to set any records, so am not aiming for even longer. But it is interesting to see that at this consumption level a pump with a smaller reservoir (such as the YpsoPump with 160U) lasts me at least 4.5 days. Even when flushing Fiasp bubbles through long tubing.