It’s summer again, and many people are concerned about carrying their insulin safely in the heat. And again we see people online sharing tips and tricks. In this case there’s a common story of recommending “yoghurt pack coolers” for carrying insulin pens.

But I’m here telling you this is really dangerous! You run a huge risk of ruining your insulin!

I happen to have a CoolPod yoghurt cooler, so I did some experiments.

On a mild day, I took the CoolPod from the freezer, and inserted a Novo FlexPen and a MedAngel sensor. I kept another sensor outside the pod to measure the ambient temperature. 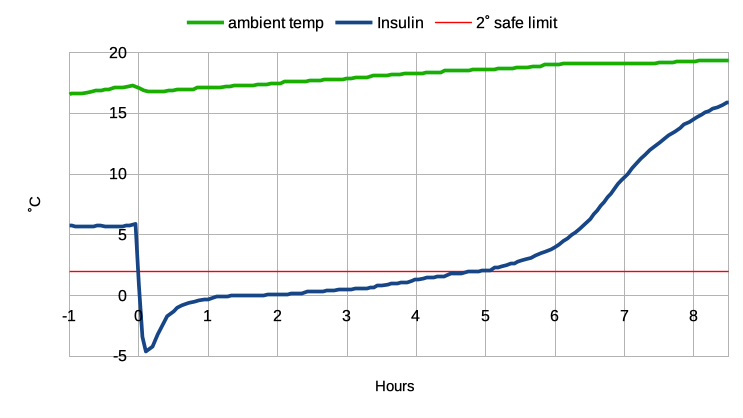 As you can see, the temperature of the insulin quickly dropped to below freezing. This insulin is thus ruined!

It was an hour and 45 minutes before the insulin passed above freezing, and 5 hours before it passed into the 2˚C safe range. But from that point on things warmed up relatively quickly.

This insulin is safe at up to 30˚C for up to 28 days, so there wasn’t really a termination point  for this experiment. But the insulin would be unusable after several hours too cold.

What if instead of a frozen pod we just used a chilled pod to provide “thermal inertia” and maintain the insulin temperature for longer without freezing it? 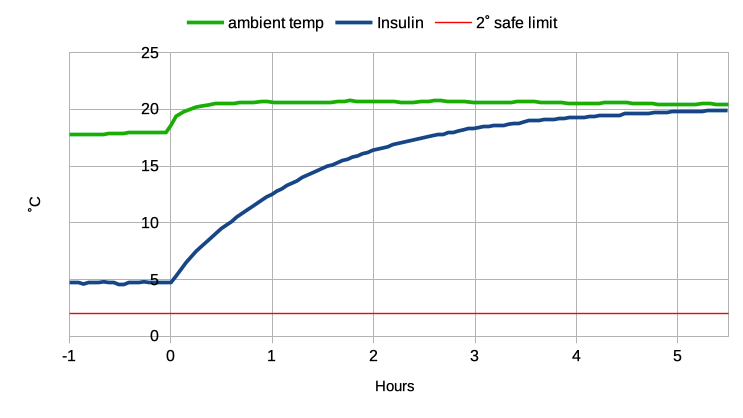 Here I had the CoolPod with the insulin in the fridge, where it had been sitting at a stable 4.5˚C. I put it with an external MedAngel sensor on the shelf in my warm study (which you can see is a few degrees warmer than the rest of the house at the time).

With things starting off cold yet un-frozen, I’m not surprised to see the insulin warm up quickly. There’s not really much thermal mass in that CoolPod once we take away the required frozen-to-unfrozen state change.  Note that it took 1.5 hours for the temperature to rise from 5˚C to 15˚C. I would expect things to climb even more rapidly when the ambient temperature was double this.

What if I protect the insulin from being frozen?

Some people will wrap the insulin in a cloth before inserting into the cooler to protect it from extreme cold and hope it doesn’t get frozen. So I tried that. 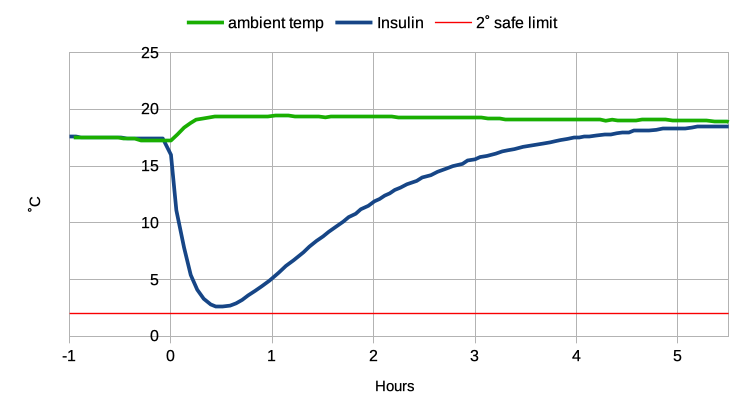 Obviously the details will depend on the material you use to insulate against the cold. It’s very “hit-n-miss”.

In this instance it did stop the insulin from getting too cold. Just.
But then it wasn’t long before the insulin was warming up again.

What can we do?

Frozen coolers like this are not really useful tools for keeping our insulin cool for longer than an hour at most! And we run a serious risk of freezing and ruining the insulin before it warms up again.

So what do we do? Don’t use a CoolPod!
Or rather, only use the CoolPod for keeping your yoghurt cold. What else?

For the safe transport of insulin in hot climates I highly recommend the FRÍO range of products, which keep insulin at a stable temperature through evaporative cooling. I’ve used them for years (especially during travel).

You don’t always need a cooler

Note that the insulin isn’t immediately ruined if it passes that temperature either: it’s not like freezing. See the “Have I cooked my insulin?” article for examples.

If you’re out for the day with your insulin, my advice is just to keep it wrapped up and out of the sun. Of course, keeping a MedAngel sensor with it will alert you if it’s getting too hot.

All the products mentioned here were bought at my own cost: this is just the result of practical experience (not lobbying/influence).

1 thought on “CoolPod – dangerous for insulin!”