Yes in many parts of Australia Daylight Saving Time is finishing on Sunday morning, the 3rd of April 2022. At 2AM your clocks may jump backwards and repeat some of the night. You may get a bit of extra sleep. But this can sometimes play havoc with our diabetes tech if we don’t handle it properly.

I last wrote about this a few years back, and the basics are similar. But we have some new devices around so it’s probably worth a recap.

Locations that are changing time include:

We usually have to at least update the time on the kitchen stove, the microwave, and the car. In my own car (and separately in its GPS unit) I only need to turn Daylight Saving off and it moves the time by an hour (obviously that wouldn’t work if I lived on Lord Howe Island though) but some devices we need to set a whole new time.

But more and more devices are starting to do this automatically. So it’s worth thinking about which devices we use in trying to manage our (feral) diabetes.

As long as they’ve been set to the correct timezone: some cheap Android phones sometimes default to a Chinese timezone that’s vaguely correct but doesn’t have our DST. So it’s always a good idea after setting up a new phone to double-check and adjust the timezone.

Often the default is to have the phone automatically choose the timezone based on your location, but (especially close to state borders) this isn’t always reliable, so I prefer to have that turned off. Unfortunately some manufacturers “simplify” their version of Android so that when you turn that off it also turns off auto-setting of the underlying time, which is frustrating. I prefer to have time synced, but not timezone.

If your BG meter is set to synchronise its time with your phone via Bluetooth, note that you should do a blood test in the morning after the time has changed, so that the meter is updated for any future tests.

If your meter doesn’t have this, remember to manually update its clock so your recorded readings make sense when(if?) you review them. 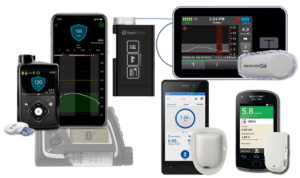 Standalone pumps from Tandem, Medtronic, Insulet, Ypsomed, and Accu-Chek will need you to manually change the clock in your pump. Either before you go to bed or as soon as you wake up. I generally found the morning was easiest (as I use my phone as my general clock, and it updates itself) although when I used to use my Animas pump as my nighttime clock I would generally do it the night before.

Updating the pump time is very important if you upload pump data to correlate with CGM and BG data.

Most CGMs are run through phones these days, and these should auto-update. The Libre Reader (and any Dexcom receiver) will need to be updated manually.

Be aware that Libre systems will sometimes lose data from that repeated hour after the change.

The details vary a bit depending on the AID/loop software you’re using, and the pump you’re using. For the systems we have in Australia: 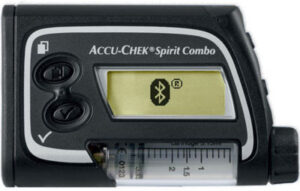 Generally I recommend changing the pump in the morning. Because when you change pump clock it really helps if your IOB and COB are as close to zero as possible. So I do it in the morning before I deal with breakfast.

So which timezone do you set your phone to on Saturday? Usually you choose one of these columns:

If you chose the “Fake Standard time” column:

If you chose the “Fake Summer time” column:

Remember, think about when you’re going to change the pump clock, and try to make sure that IOB and COB will be as close to 0 as possible at that point. 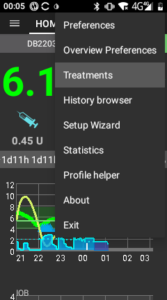 As soon as you update the Combo clock and refresh the pump driver, you should look at the Treatments screen (note that in AAPS 3.0 it moved to the upper right menu).

Because the clock has gone backwards, you may see a bunch of treatments (e.g. boluses, temp basals, but hopefully no carbs if this is before you eat) that have already happened but are now in the coming hour. You should clean these up (otherwise the system may refuse to enact boluses because “you just did one”, or even “you’re about to do one”).

Don’t use the “DELETE FUTURE TREATMENTS” button, as then the records may reappear after the next refresh. Instead, use the “Remove” option on each offending treatment (which will mark it as inactive but not actually delete it). 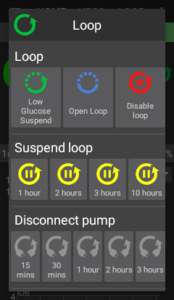 But even when you complete this, the final IOB/COB may be slightly off. So it might be best to suspend the loop for a few hours to let things settle. Things do get more complicated if you’re trying to cope with a big meal of course.

Some work is finally afoot on an updated looping driver for the Combo that does let it set the clock. That will finally remove a twice-yearly pain point for many users. However that’s not in production yet, so for now we have to keep doing the old timezone-shuffle.

Incidentally, in the US the t:slim pump has now got a t:connect phone app, but with their recent Daylight Saving start lots of people apparently ran into a problem where the app complained at 3AM when the phone and pump no longer matched (or complained earlier if you tried to change the pump time before you went to bed). Almost exactly the same problem AndroidAPS has had with the Combo…
Hopefully they have a solution in place by the time they eventually introduce t:connect to Australia (probably still years away).

Everything should go smoothly