I have written in the past about how I fill my pump with insulin and usually run it until it’s empty. I do of course change the cannula regularly. 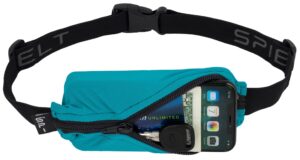 For some time now I’ve been wearing my YpsoPump OPN in a “running belt”. The photo here shows one stretched to hold a large phone, but it hardly has to stretch for the tiny pump. I wear this around my waist under my clothes: in fact below the top elastic of my briefs. It’s probably relevant that I rarely have to get the pump out. It just sits there quietly, doing its job and talking via Bluetooth.

The pump tubing snakes out from the pouch and usually along the belt before going up or down to the infusion site. It doesn’t matter if the tubing is longer than needed: the extra just hides away inside the pouch.

So this is against my skin all the time. And as a result it stays fairly warm. I wear the same belt for days at a time (I do change them over and wash them!) and usually only take it off for things like showering.

In the Combo pump

In my 2018 “Have I cooked my insulin?” post I showed the temperature range my Combo pump went through. It spent most of its time in my pocket, although not quite as snugly against my skin. Basically it ranged between 25-35˚C. Including when in bed under a doona (duvet if you don’t live in Australia). And although we’re told that our insulin is safe at up to 30˚C for up to 28 days, I was having no problem using it at up to 35˚C for 12 days or so.

Similar data came out in my 2019 measurements with the Combo.

Ambient temperatures were often above 35˚C, but with my pump in my clothes and away from the sun, it never seemed to get quite that hot.

It’s been a few years and I’m wearing my pump differently. The YpsoPump is smaller and hides away in the SPIbelt close to my skin, so I figured it was time to have a look at how things fared now. I re-ran my measurements by placing a MedAngel One logger in the belt pouch with the YpsoPump, and have left it there for days while it gathers data. With it up against my skin all the time, it shouldn’t be surprising that the temperatures are a little warmer than before: 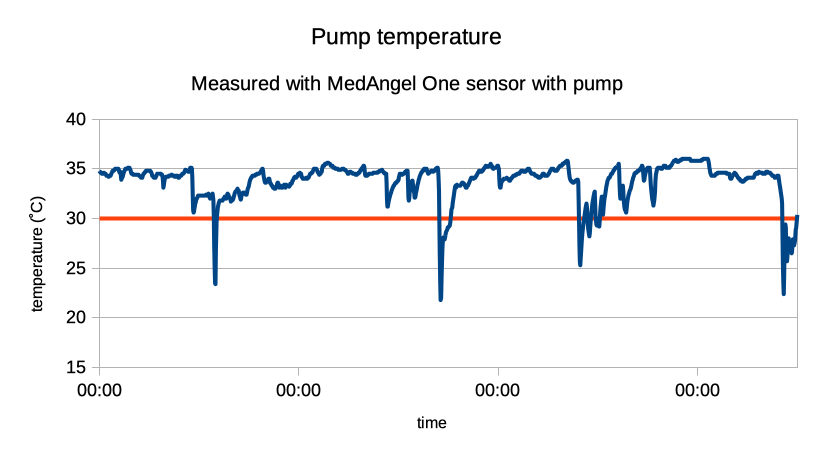 As you can see, it tends to stay in the 32-35˚C range most of the time. It does drop at times, and those are where I’ve detached the pump and put the belt down (e.g. to have a shower). It soon warms up again afterwards.

The YpsoPump’s reservoirs are glass (unlike the plastic of the Combo and most other pumps) and this can’t hurt the stability of the insulin over time. They’re also half the volume of the Combo. With U100 insulin the almost-170U I put in usually lasts me 4-5 days (including the insulin used to fill tubing, etc). As you might guess, I’m quite comfortable with the insulin lasting that long in a glass reservoir at these temperatures.

Across the last year I have been using all of Humalog, NovoRapid, Fiasp, and Lyumjev in this pump, and have noticed no change in insulin performance between the end of one reservoir and the start of a fresh one. Even when going off-label and using U200 insulin (which lasts twice as long).

Are the safe storage temperatures conservative?

The approved temperature ranges for our medicines are important so we can have confidence they’ll still be effective when we need them.

For most insulins the long-term storage should be at 2-8˚C. Below that and the insulin can freeze which damages the molecules. But as long as it stays in that range it should last until the expiry date shown on the box.

Officially, when the insulin goes above 8˚C it enters the “must use within 28-days” phase, where it needs to be kept at or below 30˚C (or 25˚C for some insulins).

When travelling I use devices such as Frío and BreezyPack coolers to keep the medicine around a stable temperature within that range and make sure it lasts long my trip. I’ve heard from some others who used Frío coolers for several months straight while backpacking around SE Asia and South America.

We often end up pushing the boundaries of the approved advice, and hope that the insulin still works. We hope that if the temperature skips above 30˚C briefly, the insulin won’t self-combust and be useless, and the data I show above hopefully demonstrates that it doesn’t. I don’t expect it to last 28 days at these temperatures, but I don’t need it to. Mind you, if the temperature gets up into the mid-40s it seems that yes the insulin can degrade very quickly. Also if someone leaves a pen cap off (doesn’t put a vial back in its box) and the insulin is exposed to light, we know that can shorten the life.

Insulin in the tropics

An interesting research study was published last year: “Heat-stability study of various insulin types in tropical temperature conditions: New insights towards improving diabetes care”. It studied the effect of temperatures (and fluctuations) found in refugee camps in Africa (it’s not only the “first world” that needs to use insulin!). It’s definitely an interesting read. The insulins they tested remained viable for at least 4 weeks in temperatures that cycled daily from 25-37˚C.

1 thought on ““Have I cooked my insulin” redux”