Just a quick note about two TGA notices that came out this month: 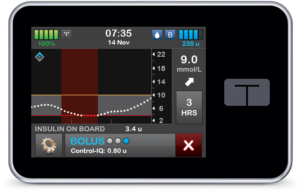 A Product Defect Correction was published, talking about software errors affecting battery life and insulin delivery. This is affecting pumps with software version 6.4.1 or earlier. 6.4.1 was the version of Basal-IQ which came out in 2020 as part of the kerfuffle about the t:slim’s TGA registration being suspended due to issues like this.

While pumps running Control-IQ (v7.6) are not affected, anyone running Basal-IQ should check their current version and contact AMSL for an update if they haven’t been contacted already.

Anyone who has not yet updated their t:slim X2 pump to either Basal-IQ or Control-IQ (and thus can only access the Dexcom G5 CGM and not G6) should also contact AMSL about an update ASAP. Even if your warranty has expired.

Not only is this an important safety issue with the pump, but the Dexcom G5 is being discontinued (and is already not available via NDSS). We’re hoping the NDSS CGM Subsidy expansion kicks in promptly in July, after which everyone with T1D should have access to G6 at reasonable cost. 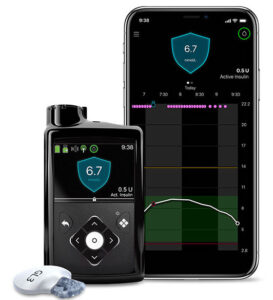 From what I can see it’s finally recognition of a fault that’s been reported with these pumps for many years. Where the gold metal contact falls out of the battery cap, and the pump then fails as it has no battery connection without it. It seems that there have now been enough examples of the problem for their internal systems to recognise it as significant (“Medtronic Diabetes Signal Detection observed a complaint signal”).

Sometimes finding the piece of metal where it’s fallen to the ground, and balancing it in place when reassembling the pump has worked as a workaround (until it falls out again). I have heard of people jury-rigging a replacement with a piece of alfoil to make the connection. The “fix” for the problem at the moment is to get a replacement battery cap from Medtronic when yours breaks.

But the notice also mentions that “Medtronic is working on a new design for the cap which will be available by Q1 2023.”

Incidentally, one does wonder if they have “observed a complaint signal” yet for all the times the cases of these pumps crack and the whole pump has to get replaced. That seems an even longer-standing complaint.