In the last day there have been some sensational claims on networks like 9News about Omnipods possibly catching fire.
Luckily this is just tabloid journalism at its “finest”, including bogus claims that the wearable device may catch fire. I’ll try to clarify.

There is no “product recall”.

There is no risk that the pods will burst into flame.

There are two components of the Omnipod DASH system: 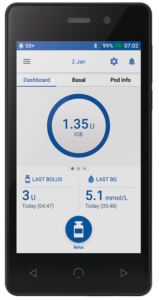 The official device is the Personal Diabetes Manager (“PDM”). This is essentially a rebadged Android phone (with all the non-pod functions disabled).

An issue with charging the PDM battery has been identified, apparently to do with things like overcharging. In such situations the battery can start to swell, and if not managed then the lithium batteries do present a fire risk. This is something we often see with laptop batteries, mobile phones, tablets, etc. It’s why we usually can’t send lithium batteries by air mail.

Do you remember the Samsung Note fiasco some years back where they caught on fire? No-one wants that to happen!
So Insulet is being very careful.

Apparently some PDMs have had battery swelling, etc. But none that I’m aware of have actually caught fire. Apparently PDMs in use more than 18 months may have an increased risk. It’s worth noting that the Omnipod DASH system was launched in Australia less than 18 months ago, so obviously this information is coming from overseas where it has been around for longer. 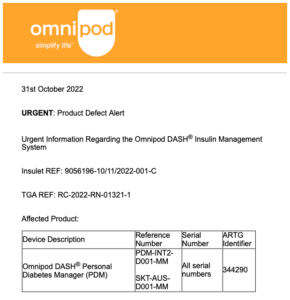 So at the end of October 2022 the company and the TGA issued a “Product Defect Alert” explaining the problem and what to be aware of. This notice was sent to all users (and we had to acknowledge receipt).

Apparently PDMs that are charged to full capacity (especially if they’re left to charge for extended periods such as overnight) are at increased risk. The steps to follow are all spelt out in the notice sent to users, but include:

These all seem reasonable steps.

If any issues are noticed, we’re to immediately stop using it and report the fault. A temporary replacement PDM would be shipped to us immediately.

Meanwhile an update to the software inside the PDM has been prepared which should resolve this risk (it’s already dealt with in other mobile phones). Replacement PDMs will be delivered to all customers in the coming months. We don’t know the precise timeline for that.

So no, the pod on your skin is not about to burst into flames.

And many “news” media are only looking for headlines and “clicks”. Sigh.

Issues with products from all sorts of manufacturers appear all the time, and in this case it looks like Insulet is taking reasonable and prudent steps to resolve them.

Incidentally, not everyone using the DASH pods is actually using the PDM. My own PDM is sitting quietly in a box, as I don’t need it for my AID software to communicate with the pods.