Having switched my CGM from Libre sensors as an experiment, I’ve been using a G5 transmitter and a single sensor. But in the last few days the values being returned have been a bit jittery, and xDrip+ has been reporting high noise from time to time. Here’s a little sample from earlier today:

So after 16 days I decided it was time to prepare a new sensor. I’ve been wearing the first one on the back of my left arm, so the new one went onto my right arm. I’ve fitted the new sensor with a dummy transmitter on top so it can “soak” for a while. That way when I move the transmitter over from the old sensor I can hopefully have stable readings promptly, and avoid the 2-hour warm-up delay. 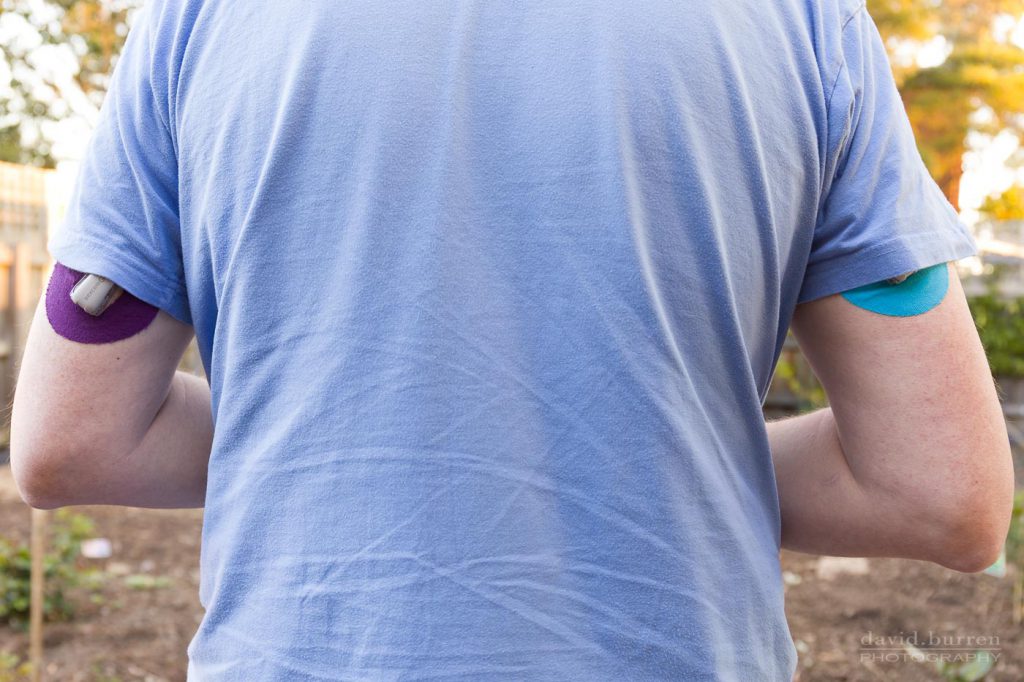 Here you can see the rear view, with the sensors poking out from under my T-shirt sleeves. You’ll notice I managed to install the new (light blue) one a bit higher up my arm. You’ll also see the RockaDex patches I have surrounding each sensor, which I’m sure has helped the old (purple) one to stay on for over a fortnight. 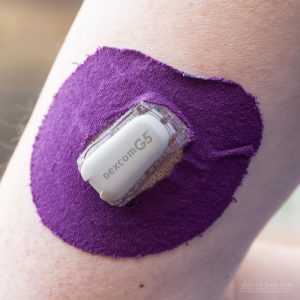 The upper edge of the patch (which is made from RockTape) did start to peel a few days ago, but some sharp scissors stopped the decay. You can see here the area that was cut away.

You can also see the wrinkling where I didn’t quite get it on evenly a fortnight ago. Didn’t cause a problem though. With the new blue one you can see what the outline was originally like. 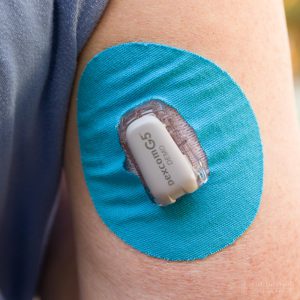 You can also make out the outline of the smaller Dexcom adhesive in the centre. Here I hadn’t quite sealed the blue patch down fully when I took the photo. Both sets of adhesive are heat-activated, so I then rubbed a warm laptop charger around it to help it stick, which now seems to have done the job.

Applying these one-handed in the mirror is a little bit of a challenge, but not too hard and it’s a location I’m familiar with. They’re the general areas I’ve been using Libre sensors on for the previous 15 months, and have proven to be robust and comfortable. I’m not likely to scrape them against things such as doorways, and I don’t get “compression lows” or discomfort by leaning on them when I sleep (I usually sleep on my side). Of course, everyone ends up with their own favourite locations.

I’ll report back later after I’ve switched the transmitter over and removed the old sensor.