We use many devices today that rely on batteries. Some of them rechargeable, some not. For essential equipment like BG meters, carrying spares is important!

As well as in things like kitchen scales (useful for carb-counting food) the CR2032 “button cells” are used in many BG meters today. I’ve been caught out in the past with a flat meter so like to keep some batteries on-hand. The most recent time my Accu-Chek Guide meter complained about low batteries, it insisted I replace them immediately. I was able to work around it by removing and re-inserting the battery tray and getting at least one more test out of them, but it’s easier to have spare batteries.

But how to carry them? I could drop some into a pocket or maybe inside a ziplock bag, but they can become jumbled, and plastic bags wear out quickly. If the batteries aren’t kept in a neat stack, it’s easy for them to become shorted out by adjacent batteries, and a flat spare battery is worse than useless. And in fact a shorted-out lithium battery is a fire hazard!
Unfortunately the packaging the batteries come in when you buy them is geared towards marketing and shop display rather than efficient storage in your pocket. 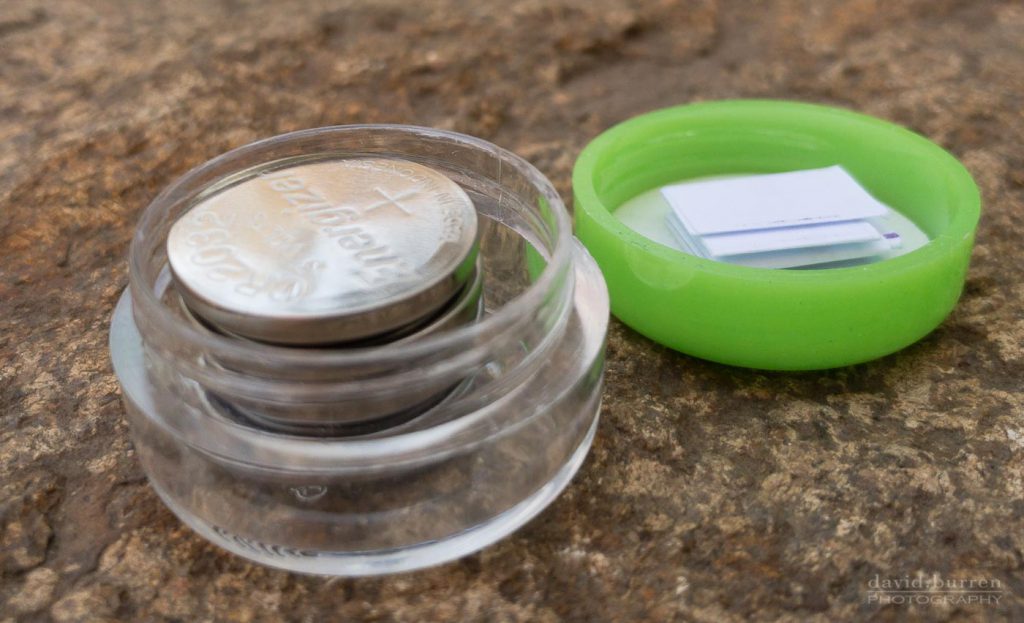 I use a tiny plastic container I bought at Daiso. It came in a 4-pack for AU$2.80, although I only needed one. Each can hold four CR2032 batteries, with a piece of folded paper inside the lid to stop them from moving around after you screw the top on. The container then ends up down the bottom of the battery pocket on my diabetes-pouch, and is dug out whenever I need it.

Do keep in mind that if swallowed, these batteries can be fatal. So if you have small children around, you may want to disguise the container so no-one thinks it contains lollies!

When I take some batteries out to replace those in a meter, I take the batteries off the top of the pile. When I replace them, I put the other batteries underneath so I’ll always know that the next to use are on the top. Otherwise it would be easy for a battery to languish at the bottom of the stack for years.

If I’m away from home and don’t have new batteries on hand to replenish the container, I put the dead batteries (just removed from the meter) into the container but upside down so I know they’re used, and replace them later. If I didn’t keep the container full, the batteries would rattle around (making annoying noise and increasing the risk of shorts).

It’s easy to keep it full. You do need to remember to replace the dead batteries in the container before you get stuck, but there ARE four batteries in there so that helps.

This container isn’t quite the perfect size (it could be slightly smaller) but it’s not too far off, and at least it doesn’t have any sharp corners when in my pocket!