Hot news for June 2018: the TGA has given approval for two new insulin infusion devices to be supplied in Australia.

A Tandem insulin pump (presumably the t:slim X2) has finally been approved! I’ve written about the t:slim previously.

Expect lots of press fanfare from AMSL (the Australian distributors). They’ve been saying for a while that they have something coming as an upgrade path for Animas users, but legally they haven’t been able to mention the specific device until TGA approval was given. Now they can.

Note that new purchases of the pump through private health insurance will have to wait until September after the next update of the Prostheses List. Presumably AMSL will be working hard to make sure this Tandem pump is on that update! 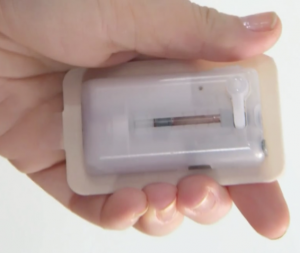 This device is a bit unusual. It’s presumably going to be marketed for type 2 diabetes, but it’s unclear how funding for this will fit into the Australian market. Time will tell. Remember, there have been a few pumps in the past which have received TGA approval but were never brought to market.

The V-Go has been available in the US for a few years already, and is a “patch pump” which you wear for 24 hours. Every 24 hours you fill a new one with insulin, remove the old one, and stick on the new one.

But it doesn’t have any electronics: it’s a mechanical device driven by a spring. In the US two versions are available: one that applies 80 U of insulin over the 24 hours, and one that applies 40 U. Buttons on the device allow you to apply a 2 U bolus (with a limit of 36 U/day of bolus).

I haven’t seen exactly what’s described in the TGA approval (one or both variants) but either way it’s fairly “lo-tech” for a “new” device! People with Type 1 Diabetes will not be interested in the V-Go at all.

In the meantime, I expect there will be much excitement about the upcoming Tandem/AMSL announcements.