As part of my participation in the Nexvax2 coeliac vaccine trial, last week I had to attend my local public hospital for a gastroscopy. Of course my AndroidAPS closed-loop insulin pump system went with me. This wasn’t the first time I’d been sedated in hospital while using the loop: you can read about my visit to (a different) hospital for a colonoscopy last November in an earlier article.

Unlike for a colonoscopy, this time there was no nasty “prep” the previous day. But after fasting since midnight and arriving at the appointed 07:30 time, I ended up sitting around for aeons waiting. In the end I got called in around 10:30, and there was a bit of fluster as staff realised they had a fasting person with Type 1 Diabetes who had been bumped from early on the list without anyone there noticing!

As someone with type 1 diabetes I’m used to being put at the top of the day’s list because of fasting issues like this. In my years of managing my diabetes with MDI (injections) and then plain pumps (and without CGM, so with only occasional fingerpricks) I’ve been through plenty of similar procedures.

I know (in fact I remember): in those days I would have been very stressed by this delay as my BG would undoubtedly have been slowly dropping, but I wouldn’t be allowed to eat or drink anything to bring it up (other than sucking on lollies under my tongue so some glucose could be absorbed directly from there).

Another option might be to stay in hospital overnight and trust the hospital to manage my insulin and glucose needs via an IV drip, but that has never been something I’m keen to try. That’s a lot of work for them to do, and a lot of faith I would have to have in the system.

But this time I had been sitting in the waiting room getting very bored, and thanks to AndroidAPS I wasn’t worried. I had set a temp target of 6.0 mmol/l for several hours, and I was hovering around that quite comfortably with the system tweaking the insulin flow in the background. Even though I hadn’t eaten or drunk anything since 22:45 the previous evening (with just a glass of water before 06:00) I wasn’t at risk of hypo.

I was only at risk of dying from boredom!

In the lead-up to the hospital visit I had checked my CGM calibration very carefully and was confident I didn’t need to keep fingerpricking to check it.

As I was being prepped for sedation in the theatre, the nurse and anaesthetist were very interested in my tech. They commented that their job was made easy by the way I had everything “under control” for them already. 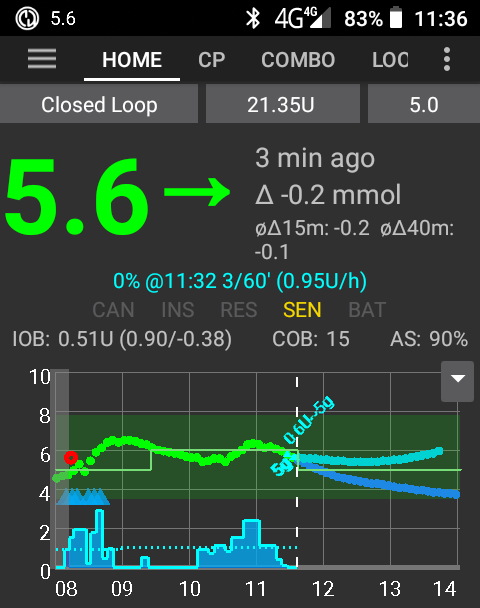 My AAPS phone (in “airplane mode”) and Combo pump stayed with me through the procedure, and eventually I woke up. This screen grab is from when I was in recovery having a late breakfast. The temp target of 6.0 had just finished, reverting to my default 5.0 mmol/l.

Yet another example of why I like living with a loop rather than having to continually manage my diabetes manually!

3 thoughts on “Looping through another hospital visit”