There still seems to be some confusion in the community about whether the new Fiasp insulin should be used in a pump. Also confusion amongst the pump sales/support staff!

The regulatory position is that while in the USA it is not approved for use in a pump, it is approved in both Australia and Europe. But tied in with this is the position of the manufacturers: have they actually tested Fiasp in their specific pump? Fiasp is “just” Novorapid (already tested) with some additives, but some may now be wondering if they need to do more testing.

There are multiple issues at play, and we shouldn’t get confused between them. Let’s consider the whole chain of insulin delivery in reverse, starting at the infusion site and leading up into the pump. 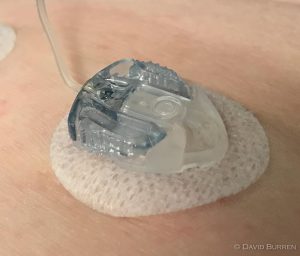 However, data from clinical trials of Fiasp combined with anecdotal evidence from the experience of many Fiasp users overseas does indicate that sometimes people get issues such as site irritation (resulting in inhibited absorption). Some people have reported they need to replace their teflon cannulae closer to every 2 days than 3. Some people have been diluting Fiasp with regular Novorapid to reduce the concentration of Vitamin B3 slightly in attempts to combat this issue.

Sometimes these issues are exhibited as occlusions reported by the pumps (where the pump is unable to push the insulin into your body) and sometimes as just the insulin “seeming to not work” resulting in higher glucose levels (it goes in but doesn’t seem to do anything).

My own experience with Fiasp is that 3 days still works great, but I do need to make sure that I’ve moved the next cannula a long way away from the last one (more than was necessary when using other insulins).

I have had situations where after a day or so the insulin seemed to have no effect. But it turned out that site was too close to the previous one. Maybe there’s been a build-up of Vitamin B3 infused into that area (or its effect on the body’s cells) and it overlapped with the new site. Or maybe something else, but either way moving to a site further away fixed the problem. 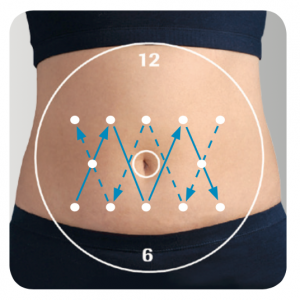 Rather than “walking” sites along a pattern around my body, I now use more of a “criss-cross” pattern to move the sites further each time. This diagram from an Accu-Chek “Guide to Infusion Site Management” should illustrate the idea.

I usually replace the tubing at the same time as the reservoir (although I replace the cannula more often, and just connect the tubing to the new site). Often this means it gets used for a week with no noticeable drop-off in insulin performance.

This has been true for both Humalog and Fiasp, although with Apidra I did change it at least every 4 days as a precaution.

Note that this has been in Australian summers and winters, as well as African deserts and rainforests. Because my pump isn’t housed out on a belt in the sun (it stays in a pocket, with the tubing leading through a hole to inside my clothes and then up to the site without being exposed to the elements) the temperatures it’s exposed to will rarely reach 35˚C. So far I have only used Fiasp in an Australian winter, but the temperature range has still generally been 25-35˚C for a week.

The materials used in the pump reservoirs varies:

The glass reservoir of the Ypsopump does offer additional insulin stability: pre-filled Ypsopump reservoirs are approved for storage in the fridge for up to 28 days, whereas plastic reservoirs for other pumps are not.

The current Australian labelling for Novorapid says that the infusion set and reservoir should both be replaced every 48 hours. This is obviously very old and conservative labelling (presumably from the days before teflon cannulae) that the manufacturer hasn’t paid to have re-certified for longer periods.

I’m not aware of any patients who are told to replace their reservoir every 2 days. At least 3 days seems to be the norm.

Note that in the US the FDA labelling for Novolog (their name for Novorapid) says it can be used in the pump for up to 6 days.

Novorapid in the “PumpCart” reservoirs used in the Ypsopump is approved in Europe for use in the pump for up to 7 days.

In the clinical trials used for formulating the Australian labelling, Fiasp was used in a variety of Medtronic and Animas pumps and is labelled for use in the pumps for up to 9 days (see page 17 of the Fiasp PI).

With the Tandem pump, the manufacturer is in the US (where Fiasp hasn’t been approved for pump use in general) and thus there seems to be no guidance from the manufacturer as to how long it should be used in their pump. The Australian distributor seems to find itself in a situation with no data to quote.

But it’s hard to imagine it would be much different to Novorapid, and anecdotal evidence from Tandem users overseas supports this. All the issues seem to be related to infusion sites rather than the pump itself.

In Australia Apidra isn’t approved for pump use so none of the manufacturers make claims about it. But in one example the manuals from Europe for the Accu-Chek Combo have mentioned that Apidra was approved. When I was testing it (with a Medtronic pump, in Australia and in Namibian deserts) I replaced the reservoir every 4 days with no issues. I did not try going any longer.

Apidra is labelled for pump use in the US, where the FDA label specifies 48 hours. Like the Australian Novorapid/Humalog labels, this seems to date from early standards (2004 in fact). The manufacturer Sanofi has indicated they had no interest in paying to get it rated for longer.

We know for a fact that the Tandem pump does not work with Apidra. The insulin soon turns to a gel in the tubing and reservoir, resulting in occlusions. Current theories are that it’s related to the pressurisation of the small “parcels” of insulin inside the micro-pump.

Apidra seems to work in all the other pumps (although that’s “off-label” use as it’s not officially tested and approved for Australia). The simple “syringe” design of the other reservoirs works quite well.

Cannulae and reservoirs do not need to be changed together

When we’re initially taught to set up a pump we’re usually shown how to fill the reservoir and fit an infusion set, and it’s easy to assume that you always need to do them together. But you don’t.

Reservoirs can hold up to 160-315 U at a time. Depending on how much insulin you use per day this could be enough for several days, or over a week. You don’t have to fill the reservoir completely every time of course. But you should still change the cannula regularly to avoid long-term issues such as lipohypertrophy.

Some people fill the reservoir with enough insulin for 3.5 days and then discard the leftovers after 3 days.

Some fill it with enough for 6.5 days, replacing just the cannula at the 3-day mark and then discarding the leftovers after 6 days.

Some fill it almost completely, and then replace it when it’s almost empty. I do this, with a regular 3-day cannula change that doesn’t always coincide with the reservoir change. I quite like this, as each of the changes becomes a quicker and less-intrusive event in my life.

Fiasp is approved in Australia for use in pumps for up to 9 days. But Tandem pumps were not used in the trials behind that approval.

If anyone is having problems with Fiasp in their pump, based on the evidence I’ve seen so far it seems unlikely that problems would be in the tubing or the pump rather than in the cannula or infusion site.

Because the infusion set technology is shared across multiple pumps, these cannula issues would end up not being pump-specific. That’s not to say that there couldn’t be a problem specific to a pump model, but I would hate for people to jump to the wrong conclusions!

2 thoughts on “Using Fiasp in a pump”