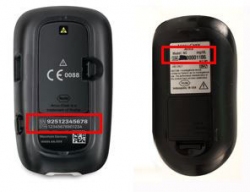 The guts of the notice says:

Presumably the currently-shipped meters have serial numbers outside those ranges and are not at risk of having these problems.

The notice goes on to give instructions as to how to reset the meters if this happens, and to say that Roche “is investigating these issues to identify the root cause and is already implementing corrective measures, such as design improvements, to address them in new models.”

This is not a “recall” where the manufacturer would summarily replace them if they’re not faulty. If you do have problems with your meter and it’s in the susceptible range of serial numbers, try the steps specified in the notice, and follow up with contacting Roche by telephone (details are in the notice).

I think it’s very important to note the word “may” (which I highlighted above in bold).

I have two Accu-Chek Guide meters, and have used them for several years now. Neither have exhibited this problem, although their serial numbers are definitely lower than 92911000001! As described in “My Favourite BG meters” they remain my “go-to” meters for daily CGM calibrations (alongside a Contour Next One).

But this Roche/TGA notice is recognition that the problem is real and has occurred to owners of some of these meters. I am aware of some Guide users who have complained of batteries not lasting long enough. If this was you: you weren’t imagining it!

Similarly, I have one Accu-Chek Performa meter (which I bought as a backup while in Namibia last year). Its serial number is also in the range affected by this recall, although I have not noticed it having any problems with short battery life. But maybe I just haven’t looked closely enough yet.

As usual, no external parties (e.g. Roche, whoever) have had any influence on this article (even on its existence). The information on this site is primarily based on my own experiences with products which I have sourced myself.