Fiasp insulin became available on the Australian PBS in June this year. Based on feedback from users overseas, I was prepared to encounter issues with trying to use it. I last wrote about my use of it in “Fiaspro” which seemed to be going fairly well. This article is a followup to that.

I ended up using Fiaspro for 10.5 weeks, then switched back to Humalog to compare. During that time I had tweaked various bits of my settings, and could no longer usefully compare with my Humalog settings from May. Soon after starting, my doses had increased to approximately 10% larger with Fiaspro than previously with Humalog, and remained fairly consistent since.

My weight had been gradually increasing and I wondered if the insulin was implicated. However I now blame that on an increased consumption of Hahn Ultra Crisp gluten-free beer at the time!

Using Humalog again I found that my control was “good enough”. And my doses reduced back to the same levels (down 10%). I figured that I could continue with Humalog and not fuss with Fiasp any more, but after 4 weeks I decided to give Fiasp one more attempt.

As a “last hurrah” I figured I should try 100% Fiasp so that if it didn’t work the information would be useful to other people too. I’ve now been using Fiasp for 83 days and it hasn’t failed yet. My dosing has been adjusted a little, but in fact it’s now slightly lower than when using Humalog.

I have done a few things differently this time, which I’ll try to break down here. 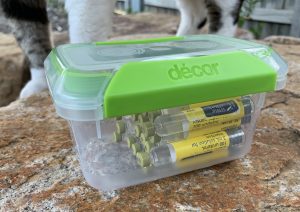 I get my Fiasp in pen form, and with five boxes in each script fill I soon demolish four boxes giving me a stack of twenty 3ml cartridges. These take up much less space than the FlexTouch pens, and can be used to fill pump reservoirs without introducing the froth that the FlexTouch usually does (due to its uncontrollable delivery speed). All the insulin is then stored at around 5˚C in a dark temperature-controlled fridge.
An example of how people have removed the cartridges is shown in an earlier article although personally I now use a variation on that (cutting into the top of the pen with a sharp knife in a method described by some as “like shaving a pencil”).

Why don’t I take apart all the pens at once? Just in case I need to travel somewhere where security will require me to have the insulin in its original packaging with pharmacy labels. 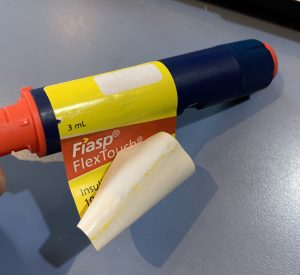 There’s a sticker wrapped around each pen with a batch number and an expiry date. Before discarding the pen body I do transfer the sticker to the cartridge (once it wraps around it sticks to itself quite well).

With the sticker in place (and a Penfill threaded cap on the end) the cartridges do still fit into NovoPens, although I use them as-is to fill my pump. 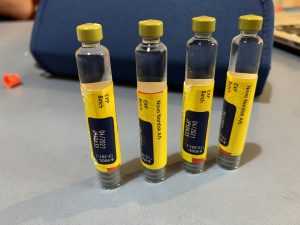 Bubbles: The Curse of Fiasp

I noticed that when filling a pump reservoir with Fiasp I tend to get more tiny bubbles than when using Humalog, all other conditions being the same. Not only that, even after I have cleared them and primed them out through the infusion set tubing, by the next day there’ll be a whole new crop.

If not managed, these bubbles seem to be responsible for the random bouts of insulin inactivity I had previously encountered. That’s what happens when you infuse air rather than insulin!

So I started a routine of checking for and clearing any bubbles daily. After my shower and before I reconnected the pump was a convenient time. A reservoir for me lasts at least 6 days, and there seems to be a steady supply of tiny bubbles for the first 2-3 days, after which they generally all seem to be gone. I do keep checking daily though: occasionally another is found.

Incidentally, I orient my pump in its pouch so the tubing outlet is at the bottom, to reduce the odds of any bubbles making their way into the tubing.

Having eliminated the bubbles, the behaviour of Fiasp has turned out to be quite consistent and reliable for me.
So far.

In my pump, clearing the bubbles involves flicking the pump so they move together (and sometimes consolidate) towards the tubing outlet while the pump is doing a “fill tubing” action. The bubbles then get flushed out the tubing and into the sink.

Depending on the length of the tubing this can result in a fair amount of wasted insulin, but it seems a reasonable price to pay (at least here in Australia) to achieve consistent Fiasp behaviour.

I’m not clear on how to do this for the reservoir of a Tandem pump however, with its flexible bladder and tiny “micropump” extracting insulin from it. That pump is known to sometimes report occlusion errors when the reservoir has bubbles in it, and I suspect this is implicated in the advice from Tandem and AMSL that Fiasp should not be used in the t:slim X2.

Warming up the insulin?

One of the things often touted as being a cause of bubbles when filling reservoirs is not letting the insulin come to room temperature out of the fridge. Colder insulin holds more gas in solution, and “out-gasses” as it warms up. My next cartridge of insulin is taken out of the fridge a week before use, and is well and truly at room temperature (18-25˚C) when the reservoir is being filled. And yet bubbles still appear. 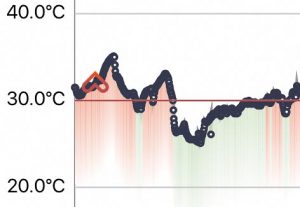 This is another place the convenience of 3ml pen cartridges comes in handy instead of 10ml vials. What I’m currently doing is putting the next cartridge with the pump a day before I need it. When the low (but not empty) reservoir warning goes off, I put the cartridge into the pouch that holds the pump. By the time I’m ready to fill the pump, the new insulin has been carried around for hours and has already come up to my skin temperature. There are usually some bubbles in the cartridge (which get left in the cartridge during the reservoir fill). My Combo pump reservoirs hold up to 315U and I usually get 305U out of each pen cartridge, so the cartridge size is very convenient.

After filling the pump there are usually still some new bubbles in the pump when I check it later that day and also when I check the next day. But it seems to have reduced/eliminated the bubble production after that.

Many people complain of stinging when they apply Fiasp boluses. I did sometimes notice this early on with Fiaspro, but strangely it’s now been very unusual with Fiasp.

One factor may be that my bolus sizes are small. For the usual meals I eat and my insulin sensitivity, an initial bolus of 3U would be quite large. I do use more insulin than that, but some of it delivered via increased basal flow and by micro-boluses on 5-minute boundaries. For me those SMBs range from 0.1-1.1U each.

But this was still the case back when I was using Fiaspro, so it’s a bit of a mystery as to why I hardly notice stinging now.

Basically, I have none. So far I’ve been using TenderLink (a.k.a. Silhouette/VariSoft/Comfort) and Quick-set infusion sets with Fiasp. I replace them after 72 hours (3 days) and have not noticed any drop in insulin effect towards the end of that.

I did learn early on with Fiaspro to properly rotate my sites, so that each site is a long way from the previous. Now I tend to use a zig-zag pattern, alternating between sides of my body each time.

Back in July I wrote “A matter of perspective” where I talked about Fiasp not having to necessarily produce different clinical outcomes if it was able to produce improvements in quality-of-life.

This time, after several weeks of using Fiasp (and tweaking my settings weekly or so) I seemed to find a sweet spot where I get both! My time in range has increased, and my average BG has dropped close to my target glucose number (and consequently my HbA1c has dropped slightly).

I am still declaring most meals to the system (and giving up-front boluses for the larger or higher-GI ones) but leaving my AndroidAPS loop to react to the rest by varying the basal rate and applying SMBs (micro boluses).

I’m still keeping Humalog in the fridge, and I still have a prescription for more. If/when Fiasp stops working for me I will switch back, but so far there’s been no sign of that. Fingers crossed!

What other options are there?

Fiasp is the accelerated (“ultra-rapid”) form of Novorapid. Novorapid is Insulin aspart, and Fiasp is “Faster Insulin ASPart”. But there is another in the works! 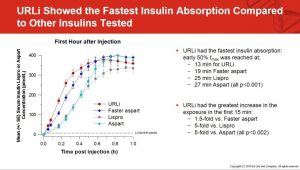 Humalog is Insulin lispro. Lilly’s URLi (“Ultra-Rapid Lispro”) is not yet available, but is currently in trials around the world (including here in Australia). It uses a local vasodilator to accelerate the absorption (instead of Fiasp’s vitamin B3). Hopefully it makes it through the trials, eventually gets TGA approval for supply, and then makes it onto the subsidised PBS list.

In the meantime, the insulin options for pumping (and looping) are:

Not everyone has had success with Fiasp, but I seem to be one of the lucky ones so far!