As I’ve previously written, the “ultra-fast” insulin Fiasp from Novo was added to PBS’s schedule as of June 1 2019. But everyone was surprised when we found it was only going to be supplied in two forms: vial and pre-filled pen. Incidentally, a year ago I spelt out the common usage of terms such as “vial”, “pen cartridge”, and “pump reservoir (cartridge)”.

The 10 ml vials can be used for filling insulin pump reservoirs, although they were designed for filling injection syringes. Some MDI (“multiple daily injection”) users do still use syringes, but probably most are using pens (see below).

Each vial nominally contains around 1000U of insulin, and the currently-used container is supposed to be kept outside the fridge (at up to 30˚C) and discarded after 28 days. This equates to using an average of 36U of the insulin every day to use it up within the 28 days. Otherwise you’re forced to throw away the remainder.

The 3 ml pen cartridges (which Novo calls their “Penfill” format) are designed to be used in Novo’s re-usable pens for MDI use. They can also be used for filling insulin pump reservoirs. For a 3ml cartridge in your pen (with a spare cartridge you might be carrying with you) that’s 600U of insulin to use within 28 days: a much more convenient minimum daily dose of 21U before discarding it.

The NovoPen 4 is a durable device that lasts for years, and can deliver insulin in doses up to 60U, to a precision of 1U.

The NovoPen Echo is very similar, but can dose up to 30U each time to a precision of 0.5U. It also has an electronic display of the last dose amount and the number of hours ago it was. In most people’s busy lives this is immensely useful!

Outside Australia Novo supplies the NovoPen 5, which has the electronic display but otherwise has the functions of the NovoPen 4. In 2019 Novo is introducing the NovoPen 6 and the NovoPen Echo Plus, which take the features of the 5 and Echo pens and adds NFC communication so the last dose information can be transmitted to smartphone apps. I believe these pens were shown at the recent ADA meeting in San Francisco, but am not aware of any plans to bring them to Australia yet (we don’t even get the NovoPen 5 yet).

By not supplying Fiasp in Penfill format, Novo (or is it PBS at fault?) is denying Australians the ability to use any of these pens.

Fiasp does exist in Penfill form, so it’s not a manufacturing issue. Novo uses colour-coding for the Penfill housings. These are just some of them:

The plastic 3 ml pre-filled pens are obviously designed for MDI (“multiple daily injection”) use. Notably however, the Fiasp “FlexTouch” pens only have 1U dose increments, and are bulkier than the previous “FlexPen” models.

Why do people use disposable insulin pens anyway?

I’m constantly disappointed when I hear people with diabetes commenting that they’d never known that re-usable pens existed! They’d been given a prescription for disposable pens from their doctor on diagnosis, and never been told they had options.

Disposable pens have a bunch of disadvantages compared to having several re-usable pens and using cartridges:

For some people they do have advantages, such as:

Having options is good for the consumer. Especially in diabetes where these choices give us flexibility in how we treat and live with our chronic (never-ending) condition. But it’s depressing to see that lots of people don’t realise they have options!

All the other U100 insulins from Novo, Lilly, and Sanofi are available in three forms. Is Fiasp setting a precedent for a future lack of options?

I don’t know if Novo is able to charge the government a higher per-unit cost for pens than Penfill cartridges (they might say the pen component adds value) but they are at least subsidised to the same final price for all insulin prescriptions.

People are working around it

People who live with chronic health conditions are very resourceful. Living day-in and day-out with diabetes and having to manage it yourself every day (with occasional guidance from medical professionals) this isn’t very surprising. It’s sort of in the job description!

And people are starting to find ways around the lack of Penfill Fiasp.

NOTE: This article does NOT constitute Medical Advice. The procedure illustrated here was done solely to illustrate what insulin users have been forced to do by the lack of Penfill Fiasp. It is NOT a recommendation that you follow this procedure. 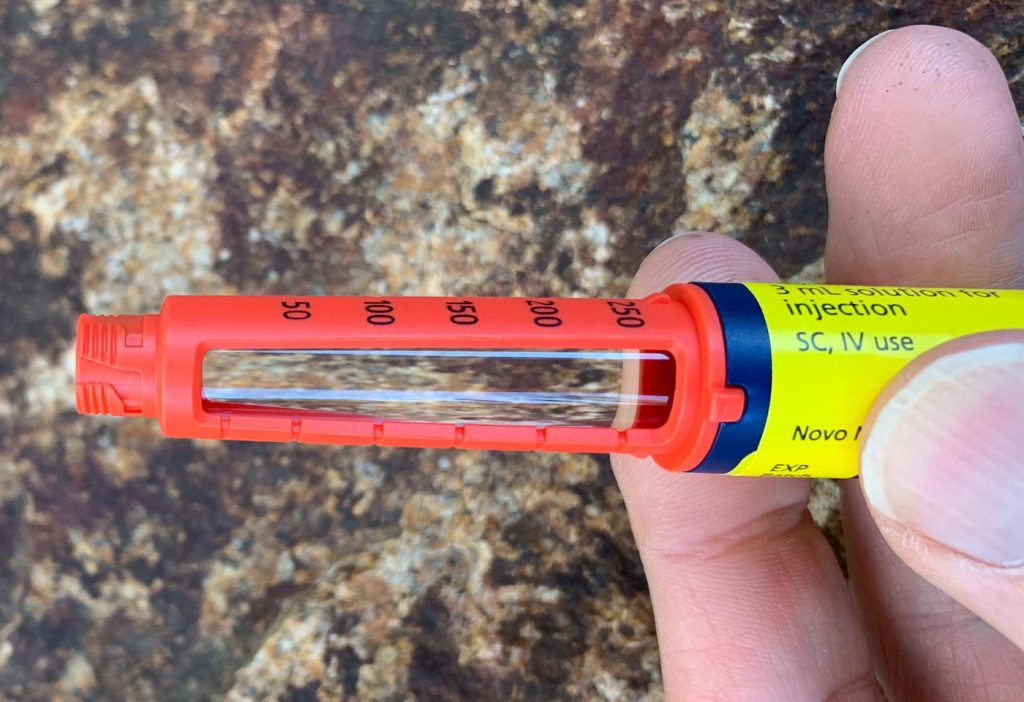 The FlexTouch pens (like the FlexPens before them) contain a glass cartridge of insulin, and it just so happens that this is the same core as a Penfill cartridge.

After cutting the plastic “arms” of the FlexTouch pen (being careful to not crack the glass cartridge) the cartridge lifts out. It is usually done in several shallow cuts, deeper and deeper until the plastic separates.

That doesn’t quite look like a Penfill yet, but it is the same core.
When you pull the threaded cap off the end of a Penfill cartridge, the glass cartridge is identical. The cap can then be pushed onto the cartridge out of the FlexTouch. 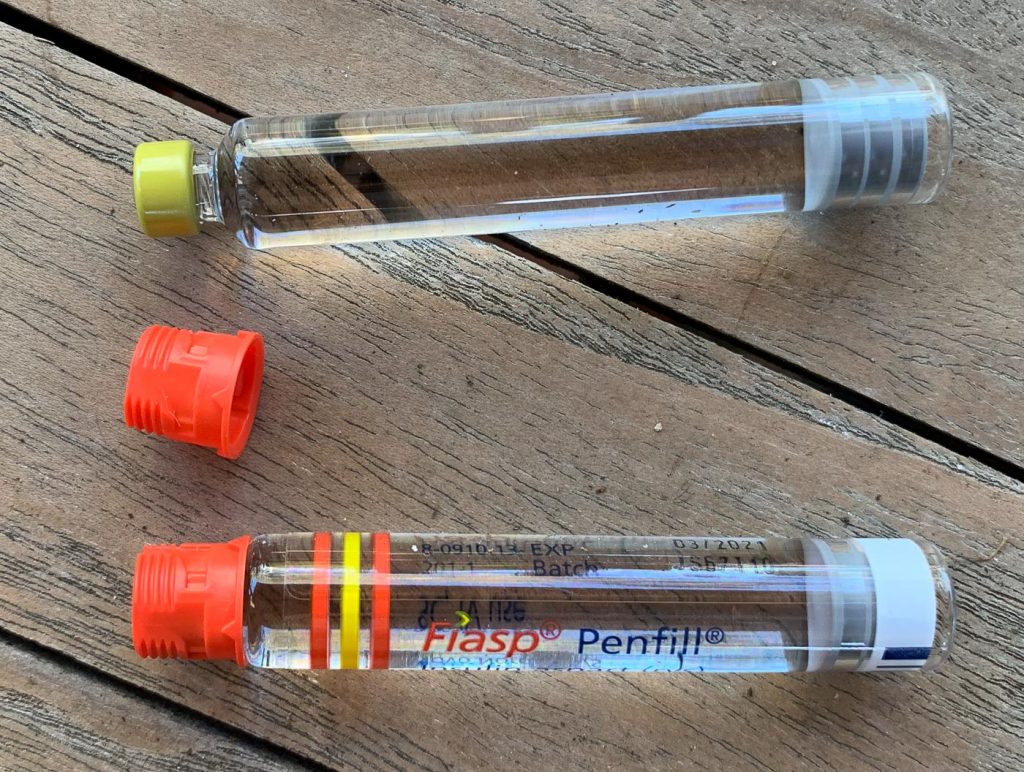 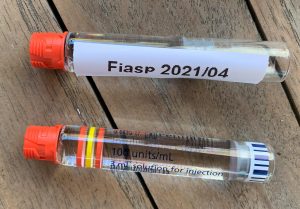 The plastic threaded caps are compatible across the entire PenFill range: you could use yellow caps from Actrapid cartridges, green from Levemir, blue from Ryzodeg, or orange from Novorapid. They all fit, but could add confusion. In my experiment here you can see that I used a red Fiasp cap as well as labelled the cartridge.

The cartridges really are the same size, which means that if used in a NovoPen they should deliver the expected dose. The internal diameter of the cartridge is the same across all the Penfill and pen cartridges I’ve measured, to within +/- 30 microns (which is probably pushing the precision of my measuring equipment). I have previously written about the issues of varying cartridge sizes in relation to emergency backup plans for other insulin types but it’s not an issue here.

I am aware of adults across Australia already doing this with their Fiasp so they can use it in NovoPen Echoes and give themselves finely-controlled boluses. The speed and impact of Fiasp is significant, and for many of these people the difference between a 1.5U and 2U dose is the difference between staying level and having a hypo. Plus having the extra record-keeping of the Echo is a useful safety feature.

It’s not hard to avoid damaging the glass cartridge while cutting away the plastic, but some care is still needed.

Then you have a clear cartridge with no label. It is important to clearly label the cartridge as “Fiasp” to avoid possible confusion with other insulins. Dosing yourself with Fiasp when you thought it was Levemir or Novorapid could be catastrophic (although similar mistakes do already happen with official labelling, and most insulin users have had to treat and recover from mistakes like that at some point in their lives).
NovoPens are available in different colours (silver, blue, red) to help with the labelling, plus pen users already often put stickers and “skins” on them to minimise the risks of confusion.

The cartridge also no longer has any batch identification or expiry date printed on it. In my example I did transfer that information from the pen.

When stored inside the FlexTouch pen, the cartridge is protected from light (which can shorten the insulin life) plus it doesn’t have the plastic Penfill “blister pack” protecting it from dust (and adding a bit of impact protection). By placing the cartridge into a NovoPen immediately this risk is minimised, but people will want to save space and the requirement to carry tools, and are sure to convert more than one at a time.

I have seen people using “snack-sized” ziplock bags to keep them clean, and re-using the cardboard boxes from other Penfill insulins to keep the light out.

I do hope that official PenFill cartridges for Fiasp do appear on the PBS soon, so these people no longer feel forced to take on these risks!

7 thoughts on “No Penfill? Side-effects of PBS decisions”