A question that comes up every now and then has been “how many people in Australia are looping?”
The answer:

As at April 2019, there were at least 107 people in Australia using DIY loop systems.

As expected, this was an increase on the result from the September 2018 survey which indicated at least 65 loopers.
A survey from back in December 2017 indicated at least 20 people (that was eventually published in the Journal of Internal Medicine in November 2018).

In this latest survey we also gathered data for New Zealand. That data is being reported separately. 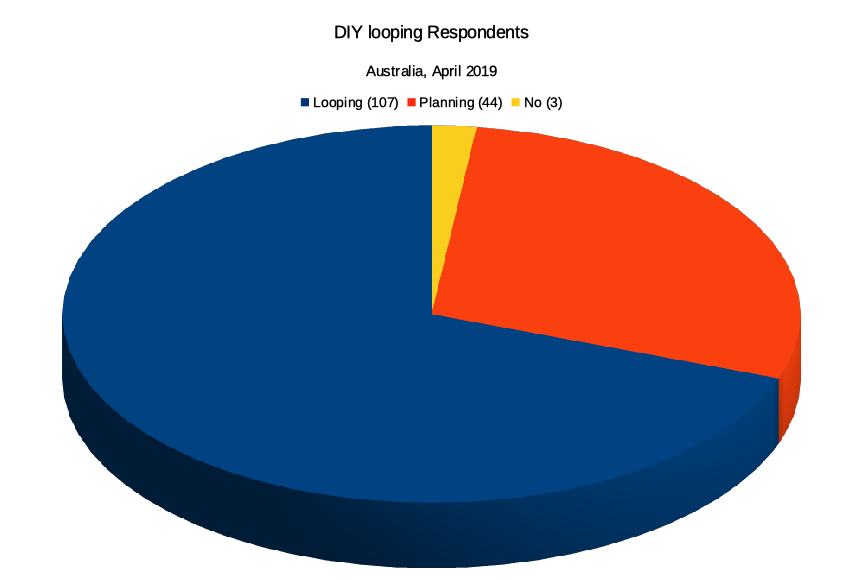 As well as the 107 “loopers”, 44 people indicated that they were either considering or planning to start.

The loop systems act as decision-support systems, suggesting changes to pump basal rates as the day progresses. If we keep ourselves as the manual controller enacting each of those changes, we haven’t fully closed the loop and this is generally referred to as using an “open” loop. Of the 107 loopers, 12 were using the systems in open loop mode. 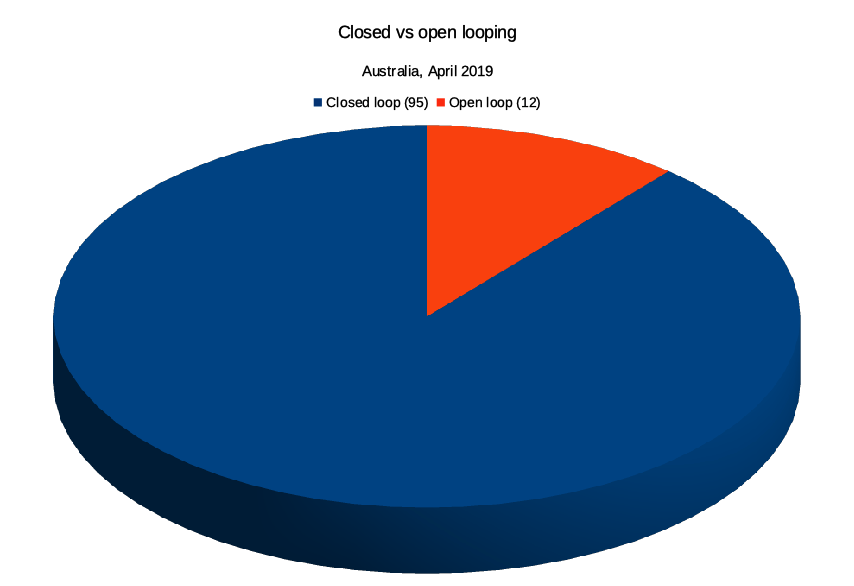 Why would those people not have fully closed the loop? There can be multiple reasons, including:

We may be able to guess at the reasons as we examine the further data. But it seems reasonable to assume that some of the “open loopers” have subsequently closed the loop.

Where do they live?

The loopers were spread around the country: 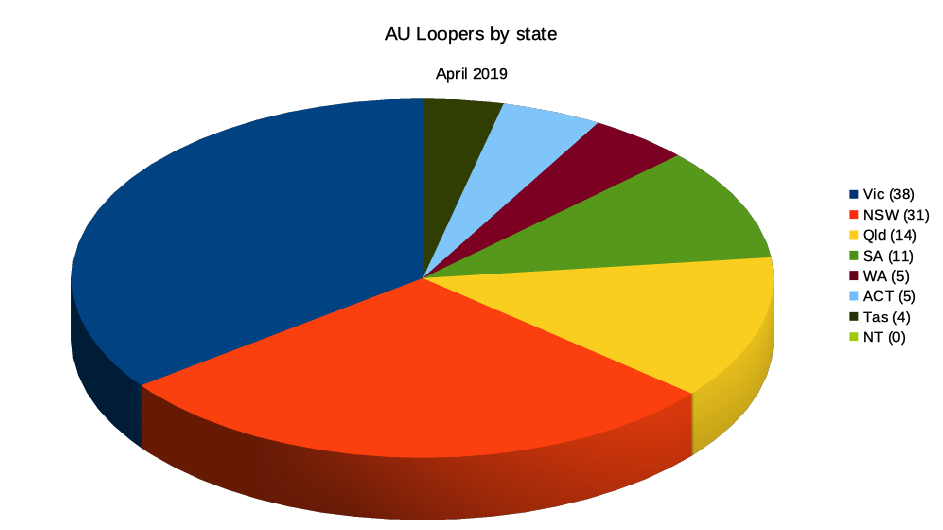 What age are the loopers?

People were asked to indicate their age in terms of rough brackets, as you can see here. These are the people actively using DIY loop systems. 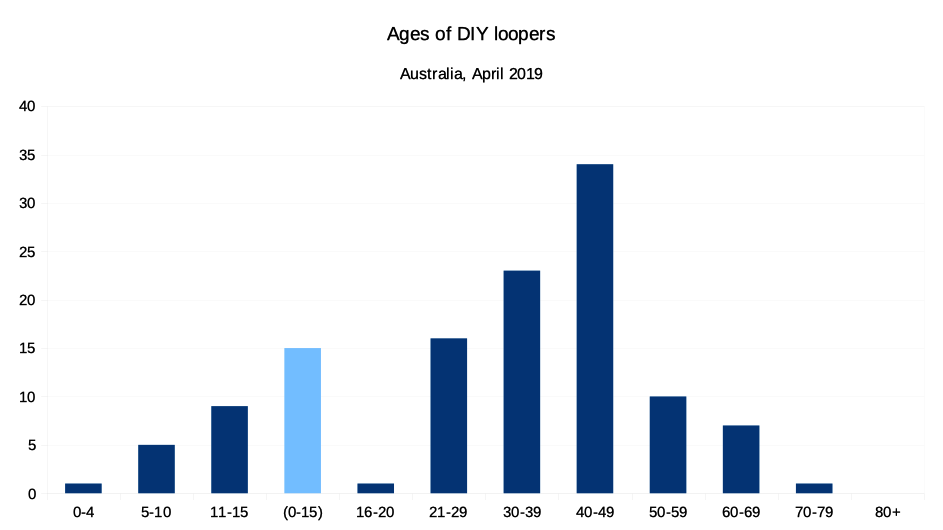 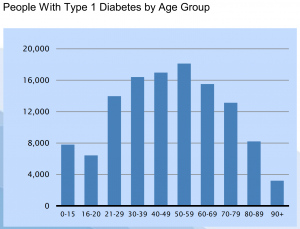 The (0-15) bracket is a simple addition of the other age brackets, just to provide a point of comparison with the Australian diabetes population data provided by NDSS. The graph shown here is from the March 2019 snapshot.

Unfortunately NDSS doesn’t publish the demographic data for people registered as pump users. We know that’s only a small proportion of the overall T1D population, and might provide an interesting comparison to the looping demographic data. But that data isn’t currently available.

Of those 107 people “looping”, which insulin pumps were they using? 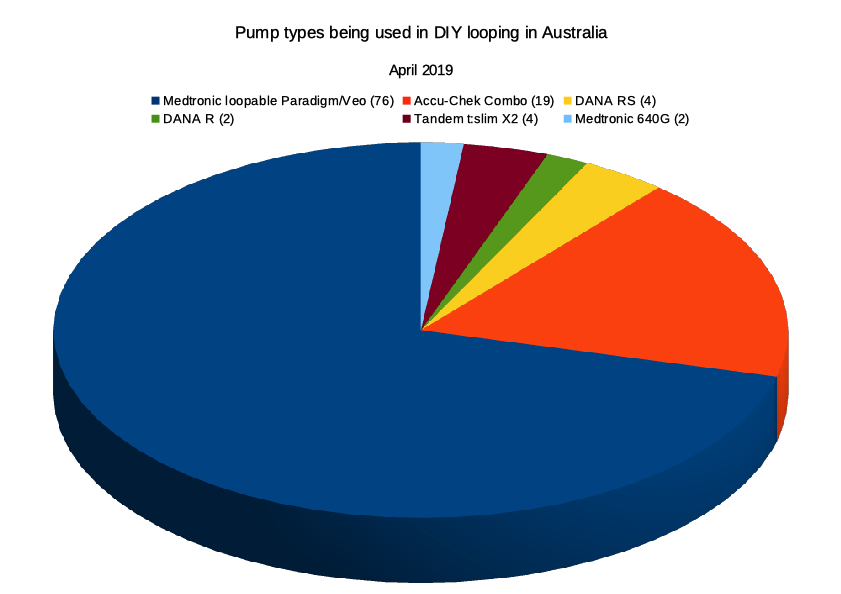 The Tandem t:slim X2, Medtronic 640G, and Ypsopump can not currently be used in DIY closed looping systems, so we know that at least 6 of the 12 people using open loops were doing so because their current pumps were preventing them from closing the loop (but they hopefully saw enough benefit to do the hard manual work).

There are three major loop software systems in use around the world: 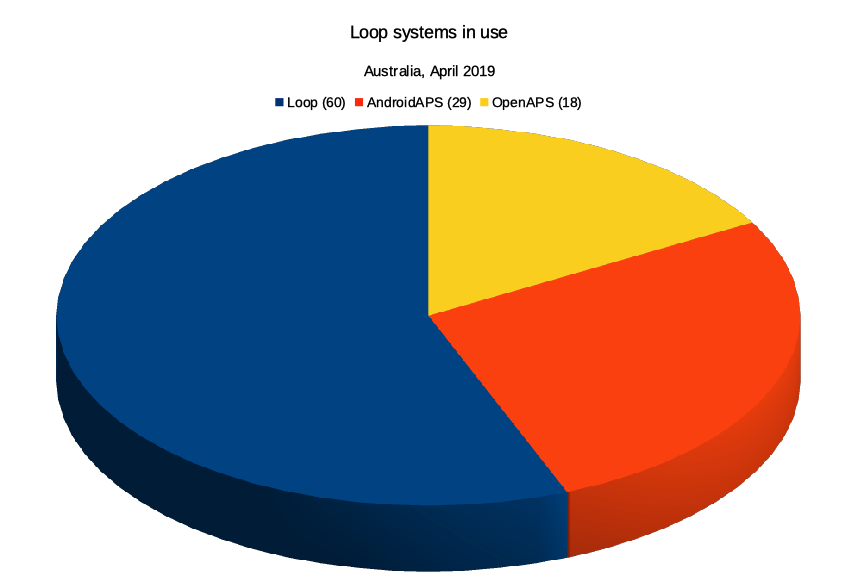 The AndroidAPS segment has grown significantly in the last year. It’s the only loop system that currently supports some pumps that are available new in Australia.

Note that although many people will use their regular phone to run their loop, some carry a separate dedicated device to control their CGM and pump (such as an iPhone user who has a pump that isn’t supported by the Loop software and thus uses an Android device, or vice versa).

The loop relies on CGM data, and all these systems are quite flexible in terms of which they will work with. 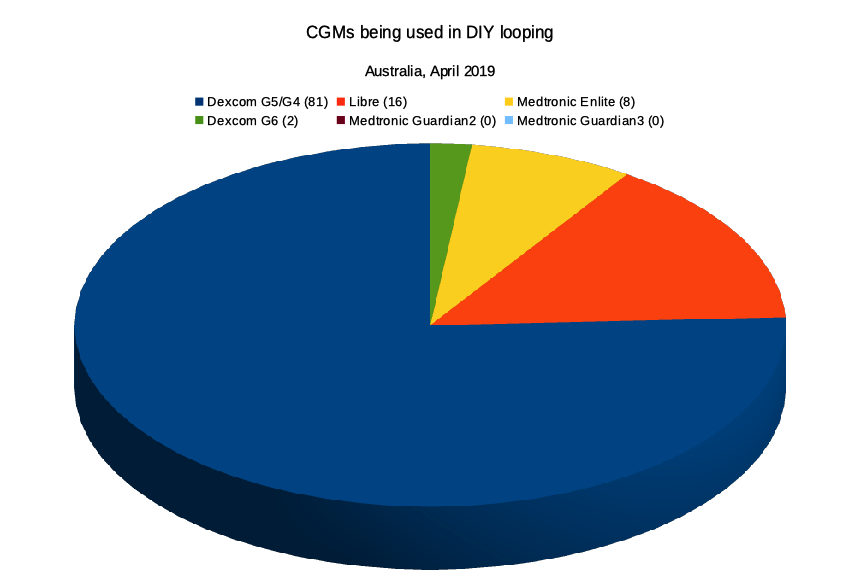 The dominance of Dexcom G5 is not surprising (we didn’t split G4 out as they use the same sensors, but most of those people will be using G5).

The 2 users of Dexcom G6 were a surprise. The G6 is not yet available in Australia, so these people will be sourcing their CGM components from overseas (which is legal as long as it’s for personal use).

Note that the Medtronic Enlite CGM is not the Guardian2 or Guardian3 systems used with the 600-series pumps. These 8 setups are using Medtronic 522/722/554/754 (Paradigm and Veo) pumps with the old MiniLink transmitters (and using the same Enlite sensors as the Guardian2). The loop software extracts the CGM data from the pump.

Living with diabetes can be oppressive. Ideally the tools we use to deal with our condition should assist us and not add to the complications. The survey asked people to rate their feeling of “quality of life” on a simple 9-point gradient from “Oppressive” to “Great”.

For those people who were looping or planning to loop, we can see the spread of their responses: 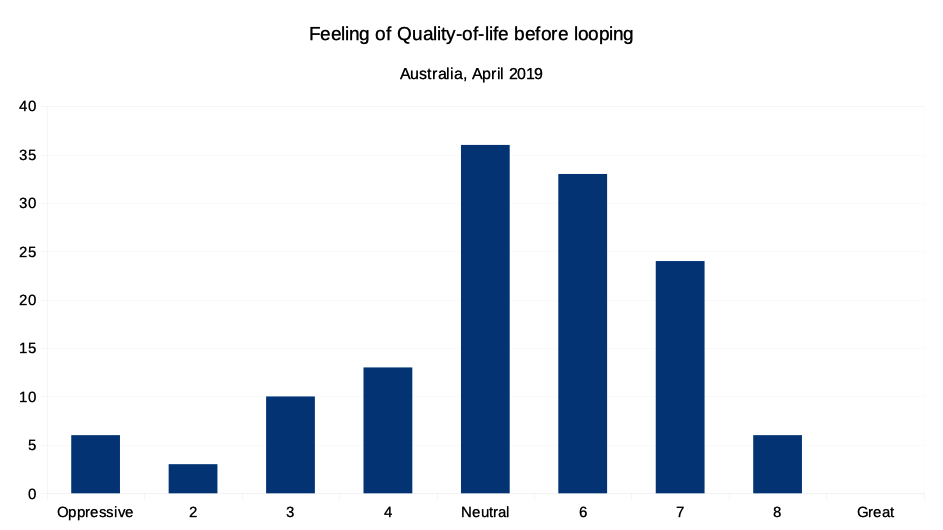 It’s at least reassuring to see that most people felt they fall on the “good” side of neutral. But there are some people who definitely feel like they were struggling!

For those people who were looping, they were also asked about their feeling since starting looping. Here you can see their “before” and “after” responses: 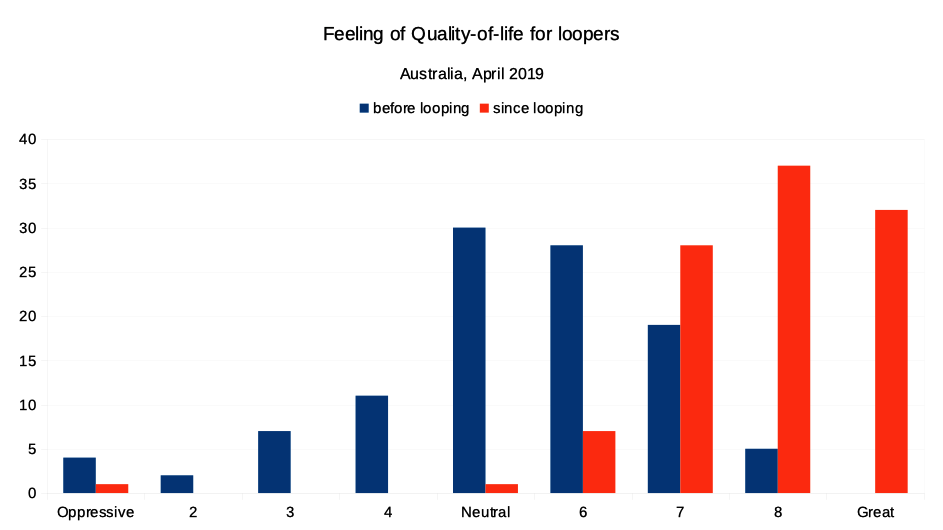 Everyone except for one person felt things since looping were on the “good” side, with most feeling it’s closer to the “Great” end. One person was unfortunately still struggling, and I hope they’ve been able to make some improvements since (they were a newcomer to looping at the time).

The amount each looper felt their life improved can be seen here: 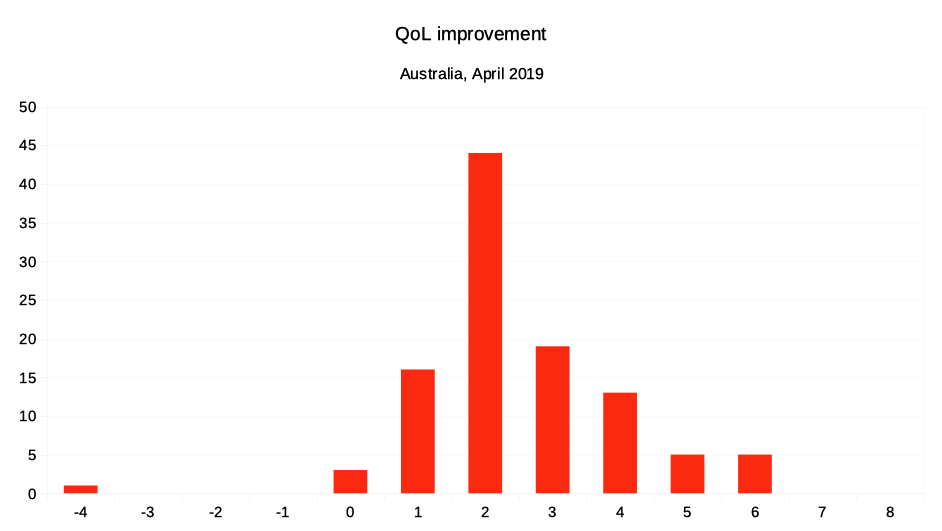 Some of those improvements are quite marked. Of course, the scale of this metric is quite subjective.

Sense of support from medical team

Using these unapproved medical systems (and using the pump and CGM devices in “off label” ways) is a challenge for medical professionals.  Doctors can’t recommend their use without taking on personal responsibility, and that’s a tricky path for some to walk.

But as outlined in the Diabetes Australia Position Statement on the use of DIY technologies, people who choose to take the risks and use these experimental systems “should continue to receive support and care from their diabetes healthcare professional and the health system.”

People were asked to indicate how supported they felt in using their systems. HCP usually refers to Health Care Professional (although some people refer to Practitioner) and can include doctors, nurses, and diabetes educators. It’s great to see that plenty of health professionals are continuing to help these people manage and treat their diabetes (which is a bigger issue than just how they decide what amounts of insulin they decide to take when). 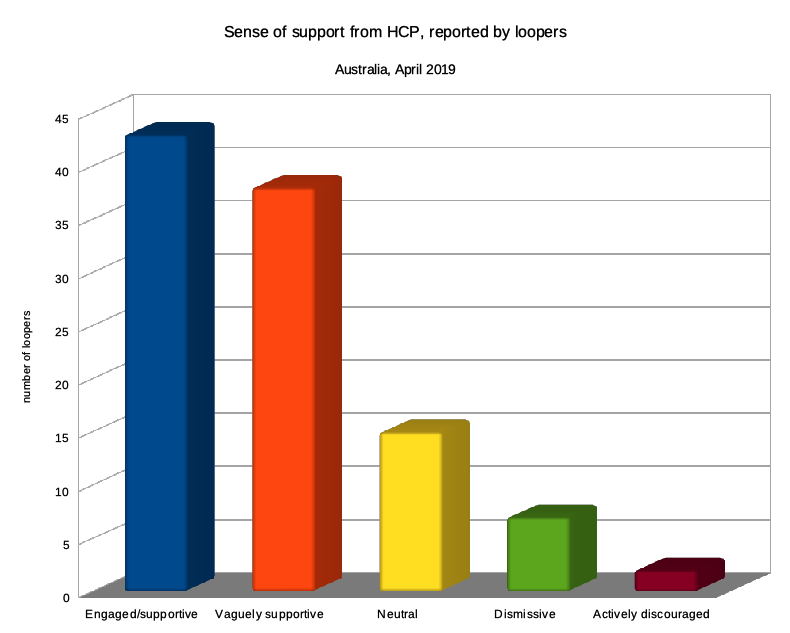 Having talked about those people who are using DIY closed-loop systems, what about the 44 people who were getting ready to loop?

There can be many reasons they hadn’t taken the leap yet, such as:

We’ll start by looking at the support for looping their HCPs have shown. 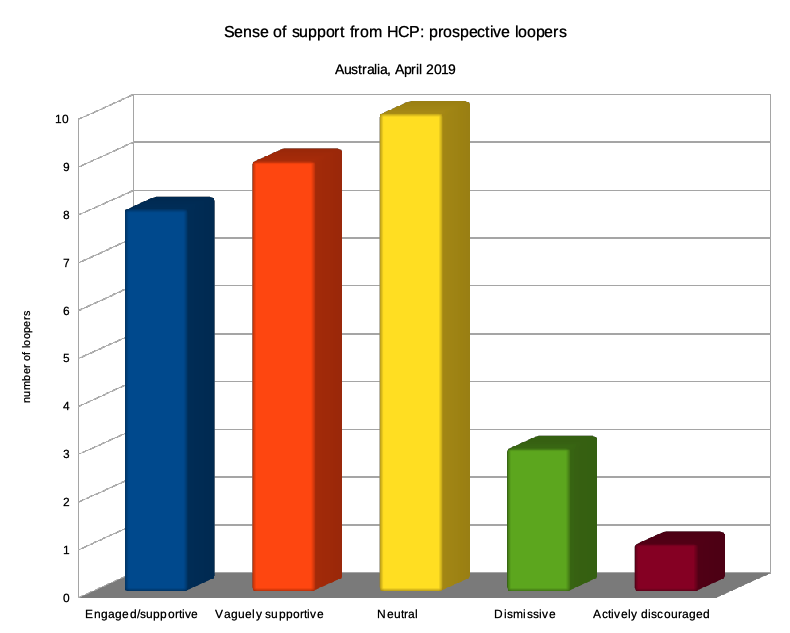 It’s hard to interpret this data precisely, but the usual expectation is that it’s a measure of how positive/negative the HCP has been when the person with diabetes has brought up the possibility of using this new tool in their diabetes management.

There is a “chicken and egg” situation: compared to the earlier graph for people already looping, we can see a smaller proportion of HCPs being supportive here. The usual experience seems to be that medicos become quite excited when they see the results the person with diabetes is starting to achieve. 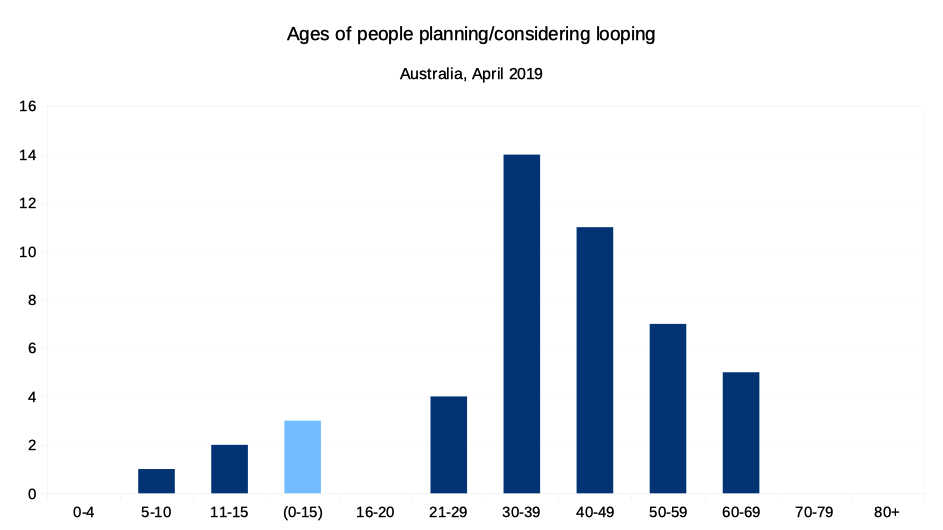 The shape of the age data is fairly similar to that of the loopers, although there’s a peak of people in their 30s rather than their 40s. 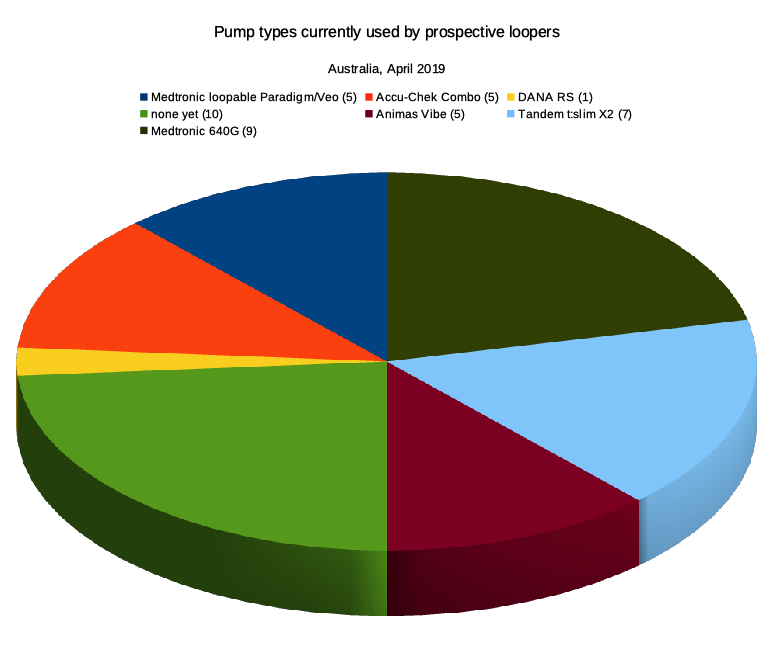 11 of those 44 people were using pumps capable of looping, so it seems likely that some of those would transition to looping soon. It’s interesting to see that 10 people identified that although they don’t have a pump yet, the ability to have a closed-loop system seems to be enticing them to consider pumping. 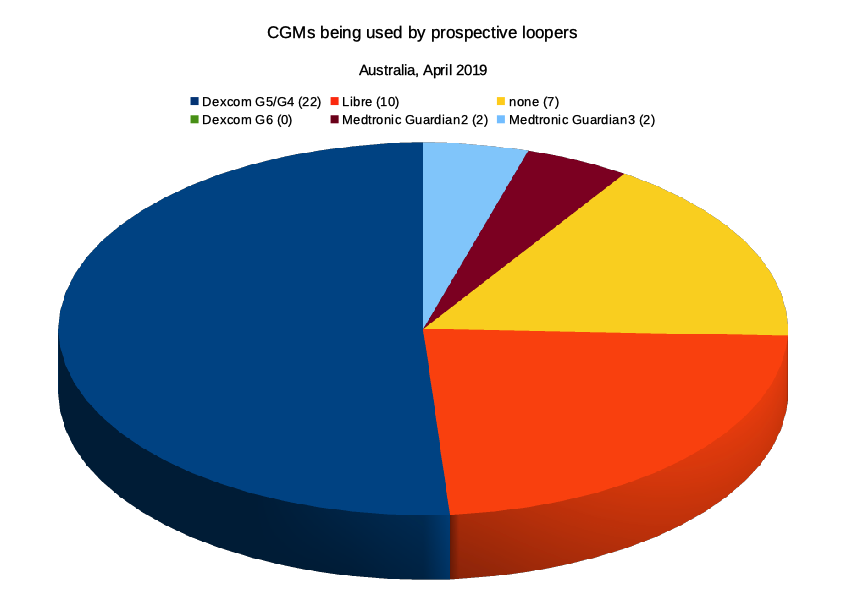 As for CGMs, there doesn’t seem to be anything surprising given the spread of pump types.

We saw earlier the measures of “quality of life”. Looking at just the data for this prospective group we do see some people who were fairly happy with their current systems. And yet they’re considering looping. I suppose most of us are always hoping for something better! 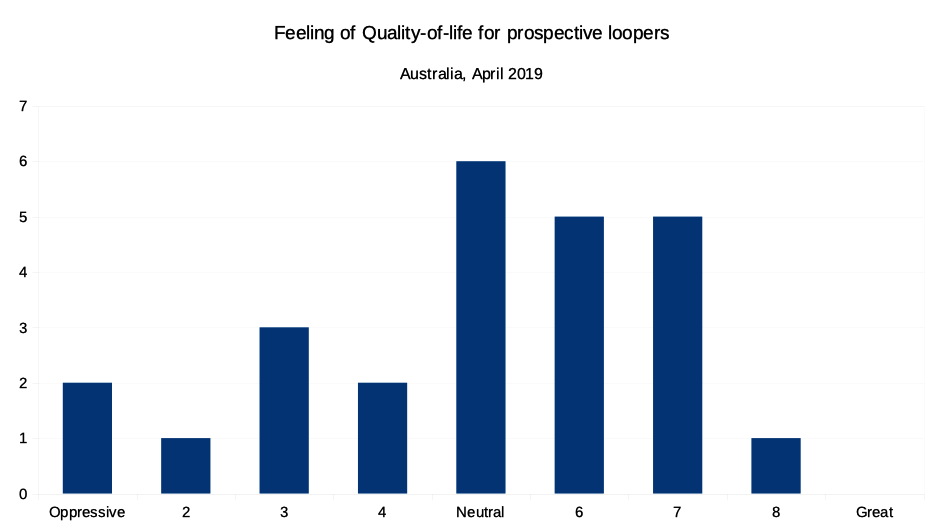 The numbers show a steady increase over time. In fact since this survey was taken, we know many more people have added themselves to the Australian looping community.

DIY looping is not likely to dominate markets at the moment due to factors of pump/CGM availability and affordability, and the need to engage with, understand, and build your own systems. Not everyone is willing to take that on (the Medtronic 670G has at least started to provide some of these benefits to a wider audience).

But we expect it to continue to develop and grow. In the US and Europe, in recent months the addition of support for more pump types (not currently available in Australia) has seen a massive increase in the looping population. There’s certainly a lot of demand that becomes apparent once roadblocks such as pump availability are removed.

With new options and features continually being added, and more loopers extolling the benefits they’re getting for their own diabetes management, DIY looping seems set to continue to lead the way in innovation for everyone!