Talk of “Time in Range” and goal ranges regarding BG and CGM data is a common thing these days. I have written about Targets and Goals in the past.

Various different pieces of software let you define your “low” and “high” marks to define your goal range, and then report statistics on what percentage of TiR you’re achieving.
And yet there’s some inconsistency in the way these goalposts are defined.

Which side of the fencepost is the boundary? 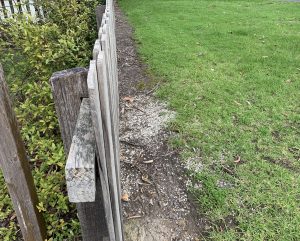 What happens when you get a BG value the same as the low boundary? Is it counted as low or as in-range? And the same goes for the high boundary.

I have my systems set to show in-range readings as one colour (e.g. green) and out-of-range as another (e.g. yellow or red). But it’s disconcerting when different pieces of software show different colours for the same reading! So sometimes I’ve had to tweak the range definitions.

In the following examples I’m using 3.9-7.8 mmol/L as my goal range. I want anything from 3.9 to 7.8 regarded as in-range, but 3.8 or 7.9 as out-of-range. To make everything consistent I’ve had to set different boundaries in different software. 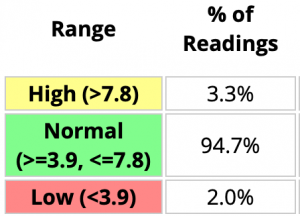 Some software makes it very clear where the boundaries lie. Such as in this example using mathematical expressions such as “<” (less than) and <= (“less than or equal to”).

In most pieces of software you may just need to test it empirically.

It’s not just the colour of the number on the screen or the dots on the graph that can be affected by this. It can also affect the statistics we look at when gauging our progress.

Being consistent about the boundaries can be important!

4 thoughts on “Defining the edges of your range”