In my recent “Pancreas phone” options post I listed some of the small Android phones people have been using for diabetes management lately. This post is a brief update on that.

I mentioned the KingKong Mini 3 and Pocket 3 models (which seem to share the same internals, just with the KKM3 favouring rugged over style) with the proviso that they were so new that no-one had experience with them yet. But since then phones started appearing, and I’ve been putting the KKM3 through its paces. A few observations: 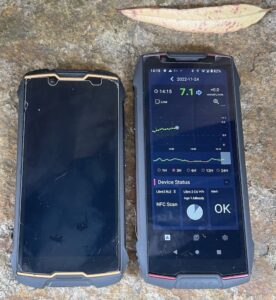 It is a little bigger than the KKM2 and KKM2 Pro, both in thickness and length. Still reasonable though (slightly smaller than my iPhone 12 mini).
In this photo it’s beside my old backup KKM2 (which is identical in size to the KKM2 Pro.

The battery life is great. It certainly lasts into a second day.

The phone has NFC, and unlike the earlier Cubot Pocket this one will talk to Libre sensors. Using the regular LibreLink app from the Play Store, it initialises and communicates with both Libre 1 and Libre 2 sensors. Right now I have Diabox on the phone tracking a Libre 2 sensor via Bluetooth. It’s interesting to compare the results with my G6 sensors, but I don’t think I’m tempted to move. 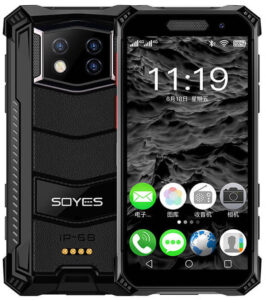 A comment on that last post was from someone using this even-smaller phone. It seems decently small, and also claims to be waterproof. I don’t have any direct experience with it, but note two things:

But it may interest some people.

Which is my favourite?

I like my devices to be “life-proof”, and my life sometimes involves rainstorms and watersports, so that narrows the choices a bit. If I was shopping today for a small rugged device to run my CGM and closed-loop system I would probably get either the KingKong Mini 2 Pro or the KingKong Mini 3.

Apart from differences in price (which can change as deals come and go) I see the main differences as:

The older KKM2 and the Pocket are both decent phones, although neither is waterproof and the KKM2 runs the older Android 10 (and has Bluetooth 4 instead of 5, which seems to cause issues communicating with the DANA-i pump if that’s relevant).