As I posted recently, my CGM data has been estimating my HbA1c will be 5.2% (which it was: 33 mmol/mol). However while Sugarmate also calculated an estimated HbA1c of 5.2%, its “GMI” value was 5.8%. I’ve always struggled to comprehend what GMI is meant to indicate. 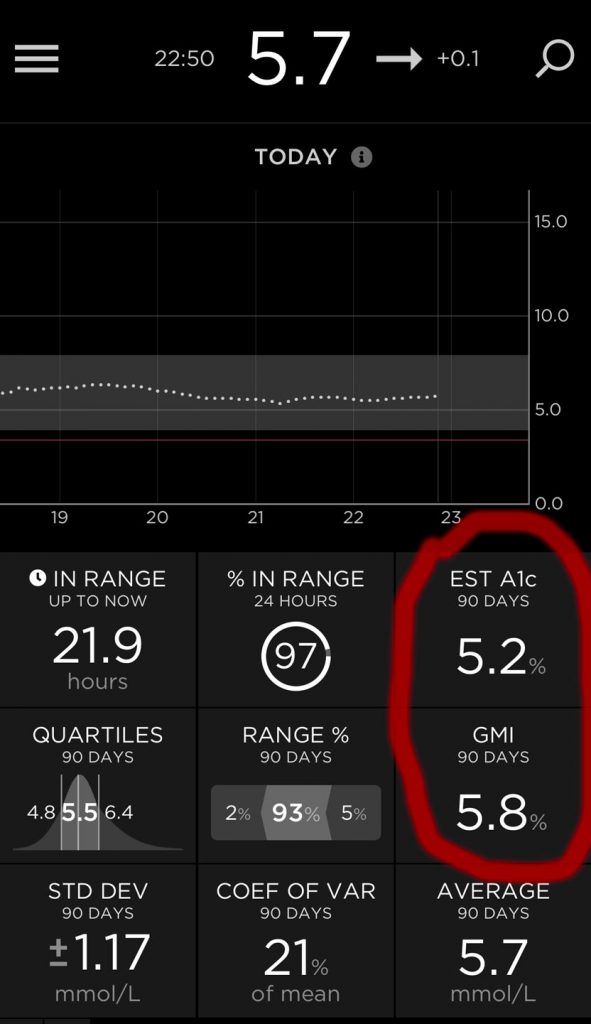 It turns out that “GMI” (Glucose Management Indicator) is a measure that was created because some CGM users were distressed that their estimated A1c values did not match their lab A1c values (see the paper abstract describing it).

As referenced in earlier articles, I use BG meters that are reasonably accurate, and use those to calibrate my CGM. I run a closed-loop insulin pump system that depends on my CGM data being as accurate as possible. An inaccurate CGM is not safe, and I can not accept that. It is occasionally slightly”off” (nothing stays stable forever) but that’s soon rectified. “Fasting glucose” lab tests have consistently come in quite close to my meters and CGM data too.

This might explain why my lab HbA1c results have always been close to my CGM estimations, as they’ve been working off a hopefully-accurate base. The actual and estimated (HbA1c and “eHbA1c”) values have always been within 2-3 mmol/mol (and exactly the same on this last example). That’s within 0.2% or so in DCCT units. This has been the case for values between 33-55 mmol/mol (5.2-7.2%).

There are multiple reasons why the eHbA1c and lab HbA1c can differ, including:

What is supposed to mean?

The GMI paper mentions using “a new formula for converting CGM-derived mean glucose to GMI based on recent clinical trials using the most accurate CGM systems available”. But somehow it doesn’t seem to match the data from my own CGM. It doesn’t try to take into account viariability like Dexcom’s GVI and PGS metrics: it’s just a different formula converting from the same 90-day average BG reading as eHbA1c.

Is it just a “fudge” to placate people who don’t like the eHbA1c numbers? It certainly smells a bit that way: at least in the range of values I’m used to seeing.

By using a name that doesn’t include the letters “A1c”, GMI manages to avoid too much association/comparison with the HbA1c measurement. But then how are we supposed to interpret the GMI percentage value?

All I can really say is that GMI has not yet shown any meaning or use for me.